There's been a lot written about Google selling the Nexus 7 tablet at a loss, but is that really a bad thing? It certainly isn't if you are thinking of buying a tablet right now.

Google appears to be thinking along the same lines as the printer manufacturers that will sell you a new inkjet or laser for £50 or less, then profit on the cartridges. Then we have the same thing with game consoles and, closer to home, the 'free' mobile phone when signing a contract.

Having now built the Play store as a one-stop-shop for apps and games, right through to books, music, TV, and film, the Nexus 7 is designed to be a high-spec tablet that you'll use to consume content, with Google taking a slice of every purchase.

If coming up with a viable iTunes competitor wasn't enough, the Nexus 7 being offered at such a low price also means it could finally establish Android as a viable platform for tablets.

At £160 for the 8GB version, or £200 with 16GB, the market for overpriced or underspecified tablets has been all but eradicated in an instant, but it's worth noting that there are a couple of limitations, such as the lack of an HD output or expandable memory. 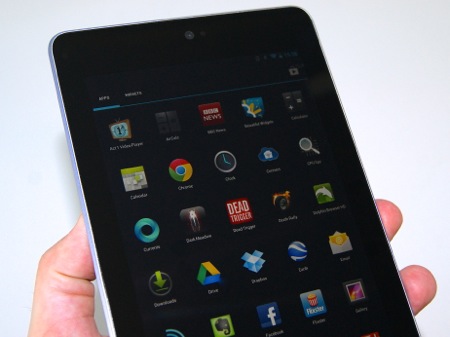 Most people probably won't care, but these omissions were probably deliberate in order to prevent other manufacturers making Android tablets from throwing in the towel. I still think that most people will gladly compromise to bag a Nexus 7 for half the price of most tablets, with many even buying one over an iPad.

With the same Nvidia quad-core Tegra 3 chipset as HTC's flagship One X, and a 1280x800 pixel high-definition screen that might not be Retina-display beating but is still outstanding, there's no reason to feel like you're missing out on the most important part of a tablet. The screen is bright and the whole tablet is light and aided by a grippy rear cover that should stop you dropping it accidentally. 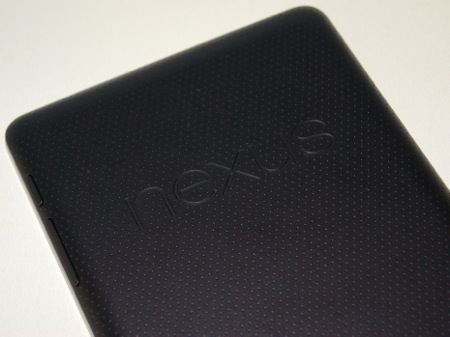 You might not be able to output the tablet display to your HD television, but if you have a Wi-Fi enabled Smart TV, you can simply stream pictures and video to your TV.

Over (the air) Consumption

The general idea is to consume content from the cloud, using the internal storage to temporarily store content offline when you're away from a Wi-Fi connection. There's no 3G option, but if you can't wait until you're next passing a Starbucks, you might opt to enable Wi-Fi tethering from your mobile phone, or perhaps invest in a MiFi portable hotspot.

All of the Google apps, including Google Mail, Drive (incorporating Google Docs) and the Play store will let you work offline to a degree, although it does take some pre-planning to ensure you've downloaded what you need before you board that 14 hour flight. Google expected the 8GB model to be the most popular, but it seems many have traded up to the 16GB model.

It's worth noting that, besides needing storage space to fill with music and video, many games – especially the Tegra HD games that offer a range of additional graphical effects and depth – can take up anywhere from 500MB to 1GB with additional game data.

If you don't want to be forced to choose between one game or another, it's another reason to stump up the extra for the 16GB version. Perhaps Google should have considered a 32GB model, although there's always a chance it will in the future.

The non-removable battery is good for up to nine hours of movie playback, and if you're not using it continuously then it will likely last a couple of days between charges with ease. There's a fast charger included to speed up recharging, although most micro-USB power supplies can charge at a lower speed, which also gives you the option of charging on the move by investing in a portable battery charger.

Too big for a smartphone, too small for a tablet?

So far, the biggest incentive to buy has been its low price. It's a significant reason, but would the Nexus 7 still be in the running without its knock-down price?

The late Steve Jobs dismissed a 7-inch tablet as being neither suitable for a smartphone or tablet, yet the form factor appears to have proven quite popular in the Android tablet world, along with the even smaller screen on the Samsung Galaxy Note. The improved portability from a smaller tablet might even see Apple get in on the act, which would be quite a major shift in strategy.

The Nexus 7 is fast, and with the latest version of Android, aka Jelly Bean, it's even smoother thanks to a complete overhaul of the user interface. As Ice Cream Sandwich continues to roll out to other smartphones and tablets, this highlights another benefit of buying a Nexus 7 over the competition: as a Nexus device, the Nexus 7 will be first to get any future updates.

Another update of Jelly Bean is 'Google Now', which learns about your life as you go. Using everything from your location, to the time of day and upcoming appointments, it can begin to present information that predicts when you're about to travel to work, where you might be going (based on appointments) and how you get there.

It could mean offering to show train times if it detects you're nearing the train station, or warning of traffic ahead of a meeting and suggesting you travel a little earlier.

Google's voice recognition service has also been given a number of improvements, to compete and even overtake the offering from Apple's Siri, plus updates to Google Maps that sees train stations, shopping malls and airports mapped out on multiple levels – as well as being able to quickly download maps for offline access.

I've got lots of things to tell you

The pull-down notification bar is much improved too. Notifications can now include images and multiple lines of information, which should open up lots of opportunities to developers with some imagination.

Due to its 7-inch screen, the Nexus 7 adopts a smartphone layout, meaning the home screen operates only in portrait mode (you can change this with a third-party launcher) and the status bar is placed at the top, rather than the bottom-right as with tablets using Honeycomb (3.0) onwards. It might appear like a backward-step, but it should help the many customers who quite likely own an existing Android smartphone and won't have any sudden shocks. 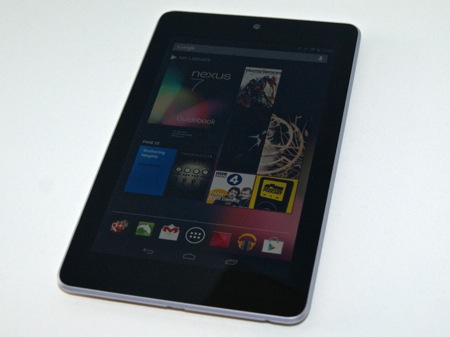 The advantage of the Google Play store is that anything you buy on one Android device can be downloaded on another, so it's easy to swap from smartphone to tablet and pick up from where you left off.

Most games are yet to let you do this (you'll need to, for example, start over from level 1 if you install Amazing Alex on your Nexus 7 after playing it to death on your smartphone) but when it comes to books and movies, or documents stored in the cloud using Drive or Dropbox, it's incredibly simple.

There's another omission from the Nexus 7, but not one you're likely to be too concerned about.

Even though the chipset can probably process 1080p video recording without breaking into a sweat, there's no rear-facing camera (instead you get a front-facing one for use as a webcam). Yes, you might miss that once-in-a-lifetime photo opportunity, but at least you won't ever risk looking stupid trying to take a photo with a tablet.

Asus (the company that builds the Nexus 7 tablet for Google) will be releasing a dock to charge the tablet when placed in a landscape format, as well as a smart cover that turns the tablet on and off through the use of a carefully positioned magnet in the cover, iPad-style.

There are already third-party cases with the same feature, but be wary of buying a third-party dock because the connector is reversed, meaning many docks will work only with the tablet facing backwards!

Anyone wishing to be a little more productive can add keyboards, mice, Apple's Magic Trackpad using Bluetooth, or via an optional USB On-The-Go cable that enables the connection of USB accessories, and flash drives with a bit of hacking and rooting. If you're not sure how to root the Nexus 7, stick with the Bluetooth accessories.

There's even NFC support, allowing the easy beaming of files from one device to another, or possibly for making wireless payments in the future. Not that I can see many people swiping a tablet to pay for a Big Mac meal, or when boarding a bus.

What Google has done with the Nexus 7 is nothing short of remarkable. It is set to totally shake up the tablet market and make Android tablets desirable. Well, perhaps not all Android tablets – but certainly this one.

The big problem now is trying to find somewhere with a Nexus 7 in stock.

With a price that almost makes the Nexus 7 worthy of a punt for fun, there's almost no reason not to buy one - unless you really need a camera or HD output. Limited storage is the only concern, so I'd recommend avoiding the 8GB model
By Jonathan Morris
| Jul 23, 2012 |
Android

Journey to Real Madrid aims to put you among the stars