How to create contraptions - Amazing Alex tips, walkthrough, and cheats

Meet Amazing Alex - a creative kid who likes to make barmy contraptions out of toys and other things he finds lying about the house. In this physics-puzzler, it's your job to slot in the missing pieces to make his chain reactions come to life.

The game comes packed with 112 levels, 336 stars, more than 30 unique objects, a full-fledged level design kit, and an online archive of player-made puzzles to solve. Yeah, it's a big game.

Luckily, Pocket Gamer's puzzle masters have solved the game, and we're here to pass on our knowledge to you. We'll show you how to ace every stage, use all the objects, and make your own levels.

When you load a level, you'll see some doodles appear on the screen. A circle will appear around an object you need to move, and an arrow will show you where it needs to go, e.g. in a basket, or off the top of the screen. 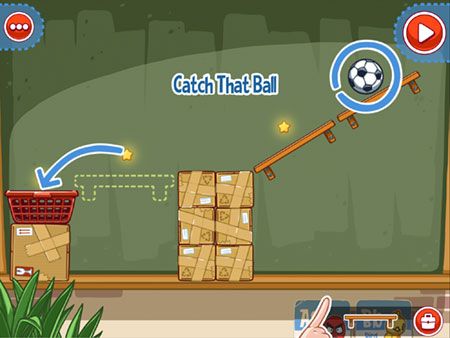 If you see a blue 'X' is drawn over an object (normally a balloon or a piggy bank), it means you need to destroy that item to beat the level.

To achieve these goals, you'll need to drag objects from the toy box (in the bottom-right-hand corner) to the playing field. In the example above, you need to put the shelf in the green dotted line so the football rolls into the basket.

You can manipulate most objects. Once you have placed it somewhere viable (it will appear red if the object is colliding with another item), you can spin it by holding your finger on the blue arrows and rotating your finger. Some objects have a button that lets you flip horizontally. 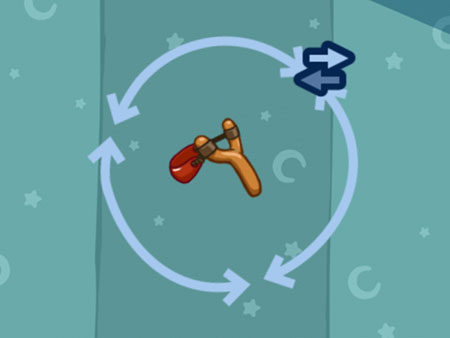 If you want to remove an object, just drag it into the toy box icon in the corner.

When you think your creation is correct, hit the 'Play' button. You'll see the physics engine take over and, hopefully, you'll complete the goal at hand. If not, hit the 'Stop' button and tweak the broken bits until you find success.

Each level also contains stars that you collect when an object collides with them. These are optional extras for puzzle masters, and require even more crazy and convoluted contraptions than before. Collecting all the stars in one chapter gives you more stuff for the level editor.

Stuck? You can use the in-game help (pause the game, then hit the 'lightbulb' icon to find shared solutions from the community) or just follow our screenshot guides.

These will show you how to get three stars on every level. Amazing Alex is quite particular with its physics system, so if you've followed our guide and you didn't finish the level, you may need to slightly tweak and nudge the objects until you win. 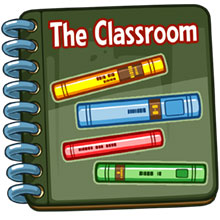 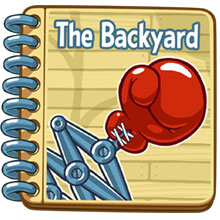 The Classroom - The Backyard 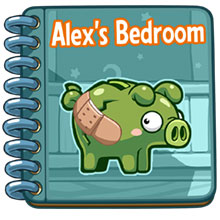 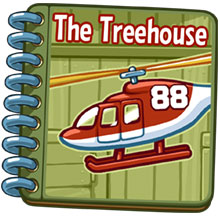 Amazing Alex features more than 30 different objects to play with. You'll be given specific toys in each stage, and new items are added as you go through the game. Read our descriptions to find out how each object ticks.

Shelf
These are nailed to the wall so they don't drop to the floor when you hit 'Play'. Use these to make balls roll and to nudge balloons in the right direction.

Balls
From left to right: A bouncy little tennis ball that fits down green pipes; a heavy snooker ball that goes down pipes but doesn't bounce so readily; a big bouncy football; a heavy bowling ball; a heavy little metal ball that's attracted to magnets; and a super-bouncy ball.

Book
These colourful tomes can be placed on their edges along a shelf to create a domino effect. They also become ramps and steps for balls. Books are affected by gravity, so fall when you hit 'Play'.

Cardboard box (big and small)
These boxes are affected by gravity, and have numerous applications. They can be platforms, they can press buttons, and they can plug up gaps. Relatively light, so a heavy ball will move them.

Plastic basket
Sometimes used as a goal area, and sometimes a handy object in your toy box. They are affected by gravity, and can be effective platforms.

Balloon
These pink helium-filled balloons float upwards as soon as the level begins. They burst when struck by anything sharp, and can lift up light objects like books. When attached to a rope, they won't fly off.

Scissors
Scissors burst balloons and cut ropes. To cut a rope, you'll need to hit the handles with something (a ball, a book, a box, etc,) to make the blades snap shut. They are not affected by gravity, so they'll float in the air when you press 'Play'.

Pipe (straight and corner pieces)
Green pipes make handy tunnels for small balls and darts. They aren't affected by gravity, and you can easily snap two pieces together to make a continuous chute. They double up as handy platforms if you've run out of shelves.

Rope
A handy material that lets you tether objects to a metal hoop (pictured), or tie two toys together. Drag it out onto the playfield, and then grab hold of one end and attach it to object one. Then, grab the other end, and tie it around the other object. Only certain objects can be tied (see the other item descriptions), and rope is affected by gravity.

Bucket
These pots are affected by gravity, and can be tied to rope. Place an object directly above a bucket and it will drop inside when you hit 'Play'.

See saw
This contraption tilts when heavy objects are placed or dropped onto its arms. Use this behaviour to fire light objects into the air (by placing a light ball on one arm, and dropping a heavy object on the other) or hit switches and scissors. Not affected by gravity.

Slingshot
This Angry Birds favourite lets you fire a number of objects across the level. Once you have placed the catapult in the level, pull back on the harness to set the strength of the shot. This is not affected by gravity. You can fire any object that abides by the laws of gravity.

Dart
A spiky little item that can burst balloons. Affected by gravity, and is best used with pipes and slingshots. Remember that only the tip is sharp enough to damage a balloon. Also, darts are attracted to magnets.

Spring
A springy object that causes all gravity-affected objects to bounce away. The amount of bounce is determined by the height you drop the object from, and the direction of the bounce results from where you hit the spring. The spring itself is affected by gravity.

Skateboard
Skateboards will roll down slopes, and can be used to carry objects or bash into platforms. Abides by the laws of gravity.

Boxing glove on a spring
This powerful object springs into action when a heavy enough item depresses the big red button. It is not affected by gravity. Use it to punch nuisance boxes and balls out of the way.

Pinball bumper
Throw an object into this floating pinball bouncer and the object will fly off with great force. This lets you ping balls about the level, but getting the right trajectory requires trial and error.

Doll
This dolly is affected by gravity and can be tied to a rope. We imagine it belongs to Alex's sister.

Trapdoor
This two-part object comes with a lever when you pull it out of the toy box. When the lever is pushed all the way, the trapdoor will fling open and drop any object resting on its doors. Neither part is affected by gravity.

RC truck
Another two-part toy. This one comes with a button that, when pushed, makes the truck spring into life and drive forward. Both bits are affected by gravity, but only the truck can be tied to rope.

Lampshade
Affected by gravity and can be tied to rope. It can trap objects when it falls.

Paper plane
This lightweight object is affected by gravity, but it will fall in a big arc like any well-constructed paper plane. The paper clip on its nose means it is attracted to magnets.

Magnet
Magnets are not affected by gravity, so float in the air at all times. They attract any metallic object (specifically, metal balls, darts, and paper planes) if they enter the magnet's area of effect.

Piggy bank
Smashing this familiar green piggy is often a goal in Amazing Alex levels. When a heavy enough object is dropped on the bank, it breaks into several pieces.

Zip-line
On this object, the Y-shaped bit runs down the line in accordance with gravity. This can hit into objects. You can also attach a rope to it to tug objects through the level. When the zip-line is placed into the level, you can move one of the arms to change the direction and distance of the line.

Making your own level

When you've finished Chapter 1 - The Classroom - you can hit 'My Levels' to start building your own stages. You can even share your amazing creations with other players.

See our in-depth step-by-step guide to making, publishing, and sharing your level here.

You'll start off with a very small number of objects to play with, but you'll unlock more toys as you complete levels. You'll get a lot of new objects if you finish all the stages in a chapter, and a few bonus toys if you get three stars in every level in a chapter.

When you finish The Backyard, you'll be able to play with the snooker ball, pipes, metal hoop, rope, bucket, bowling ball, see-saw, slingshot, dart, spring, and skateboard. Get all three stars and you'll have the boxing glove on a spring, too.

Complete The Treehouse and you'll get the bouncy ball and zip-line. Three stars on every level earns you the RC helicopter.

Arel Wars 2 hates tablets, but does look mighty pretty for a CvC game