Dead Trigger is not going to win any prizes for creativity. This is a game where you blow basketball-sized holes in the heads of zombies, while your dumbass hero delivers cliche one-liners like "goodnight!" and "down for the count".

One munch-sized stage is prefaced by "Objective: kill zombies". That could effectively sum up every level. It could be the App Store description. Hell, it could be the title.

There are three (count them) different zombies, who roam about a handful of maps, and it's your job to kill them. Different level types involve staying alive before the time runs out, killing a set number of walkers, schlepping boxes about the level, or defending some door.

Consumable items help mix things up. For example, you might want to prop a turret or a deadly rotating laser beam by one of your defence points to ward off zombies. Then again, these are locked away until you reach such a high rank that you might never get to use most of them.

The controls are serviceable. You're going to have to sacrifice either moving or aiming while shooting, but that's a necessary evil for touchscreen shooters. It also takes too long to turn around, and the weapon change button is too far away from the other controls. But the simple act of shooting zombies in the face works fine.

Dead Trigger ostensibly has a story. There's one pre-rendered cut-scene, and the rest of the tale is delivered in poorly written text boxes.

In reality, this game is about showing off Madfinger's graphical prowess. The visuals are impressive, once again raising the mobile bar (by quite a few notches). The detailed guns, sharp lightning, and fancy effects make it an excellent showcase of the new iPad's GPU, for example.

Dead on the money

Dead Trigger costs 69p, but that won't get you the full game. There are six premium guns - including the super-powerful mini-gun - that cost gold bars. That's a secondary currency that you can only get through in-app purchases, or by completing offers like signing up for free trials at Netflix.

All in all, you'll need to pay an extra £1.20 to actually get all the content. If you want the speed, damage, and money multipliers too that'll bring the extra cost up to £2.99. There's no way to get this stuff without getting out your credit card or filling in a survey.

Dead Trigger is dumb fun. It's got less brains than a starving zombie, and it'll get old long before you unlock the coolest guns, but the basic gunplay is fun and fast. Icky in-app purchases and control issues dull the sheen, but it's a pleasant distraction. 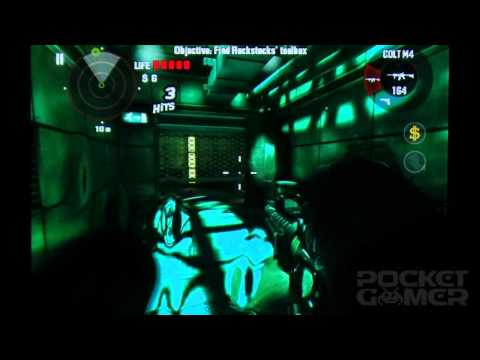 Want more? Check out our 20 other Dead Trigger articles!

Dead Trigger is totally braindead and quickly gets boring, but you'll find enough enjoyment for your 69p. In-app purchases and ill-thought-out controls can spoil the fun
By Mark Brown
| Jun 29, 2012 |
iOS + Android
Find out more about Dead Trigger

Save Christmas from zombie Santa in latest Dead Trigger update

Dead Trigger F2P move on iOS was also down to piracy

Dead Trigger to get fresh (undead) meat in new update