Kick! Punch! It's all in the mind.

After its announcement in May, we've been very interested to see more of rhythm action brawler KickBeat as the weeks have passed.

So we went straight to the source to find out exactly how it's shaping up, by speaking with Neil Sorens, Creative Director at Zen Studios.

He talks to us about the importance of narrative in the title to connect players to actions, reinvigorating the genre, and exactly why KickBeat is destined to be a Vita exclusive.

Pocket Gamer: For readers not yet in the know, what exactly is KickBeat?

Neil Sorens: KickBeat is a beatmatching-style music game with a kung fu theme. Rather than abstract cues like bars, arrows, and button icons, fully animated 3D characters serve as the action prompts.

KickBeat is based around a combat mechanic that is in tune with the music, how does this translate into gameplay?

Enemies attack from four directions. The timing of their attacks is scripted to match the music. By pressing the button corresponding to the enemy’s direction at the correct time, you’ll counter-attack and defeat him.

There are also a handful of slightly more complex mechanics: hold and release, double-tap, and multiple simultaneous buttons. You can also use the touch screen if you like.

It seems to have more of a narrative than the typical rhythm action title, can you fill us in on a few of the story beats, as well as why you're taking this approach in development?

Although most music games don’t have much need for a story, we felt that we needed one to make the characters feel more concrete. Since the game’s uniqueness comes mainly from the fact that there are these characters at the center of gameplay, rather than just an abstract interface, we wanted to bring them to life and make them feel like more than props.

The story is about Lee, a young man who takes a job as a janitor at a monastery because he sees a beautiful girl, Mei, living there. Eventually, the monastery, which protects all the world’s music, is attacked by the bad guys, and the music is stolen. Lee, though inexperienced, has been recognized as the "Chosen One", and it is his task to recover the music.

In other words, the kind of cheesy plot that you’d expect from a kung fu flick. 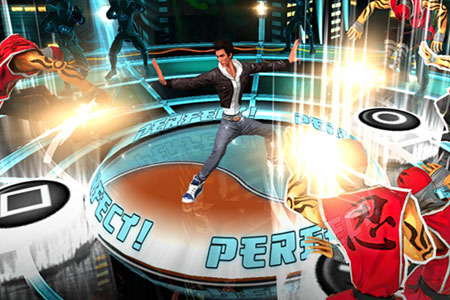 There are some really big names from the worlds of metal and rock providing the soundtrack, were you not tempted to go with something a little more traditional with this type of genre, such as electronica or urban artists?

We do have quite a few songs by electronic music producers - Pendulum, Celldweller, Blue Stahli, Voicians - as well as some hip-hop or urban-influenced artists - Styles of Beyond, Shen Yi, Southpaw Swagger, Pre-Fight Hype. It’s a pretty good mix of genres.

We were originally trying to get tracks from The Prodigy, Eminem, Beastie Boys, Xzibit, and a few others, but it’s tough to get approval from the artists’ management teams if your game and studio aren’t yet established in the music genre.

You said on the PlayStation Blog that you want to "give the genre a kick in the pants", do you think the Rock Band, Bemani and Dance Central template is getting stale?

We’re hoping that by adopting a fresh theme and allowing the player to focus on the action rather than the interface, we’ll give players an experience that is as original and satisfying as those that Konami, Harmonix, and others have delivered over the years.

The game's being touted as an exclusive for the Vita, but from the trailers that have emerged so far it looks like it could have been produced for a number of other formats. What was the decision to go with Sony's handheld only?

Because songs are typically in the 3 - 5 minute range, players can get the kind of bite-size gameplay sessions that goes well with a handheld platform. The Vita is powerful and has a beautiful screen, so we can be sure that the visual aspect of the game won’t be compromised.

In addition, the Vita, like the PSP before it, is quite good as an all-purpose media device. That means that a lot of players will have music stored on their systems, which will allow them to take advantage of KickBeat’s track generation feature.

Finally, judging by the success on Sony handhelds of other music-based games such as Patapon and Lumines, we may find our most receptive audience on the Vita. Sony’s been a big supporter on this project, and we are definitely thrilled to bring this game to one of their flagship platforms.

KickBeat will be available "sometime this year" exclusively on PlayStation Vita. In the meantime, check out the trailer for it here.

Want more? Check out our growing collection of KickBeat articles!

Trailer for Rise to Fame: The Music RPG for iPhone

Turn yourself into the world's greatest rockstar with Rise to Fame: The Music RPG for iPhone