All about the boy

How Amazing Alex was born

When you make a game, you spend most time making items, backgrounds and levels. But in most games, the key element that has to be designed for anything else is the main character.

Of course, in the case of Amazing Alex that was Alex himself.

But, because Amazing Alex was based on an existing game called Casey's Contraptions, Rovio's lead character designer Miguel Francisco didn't start the process with a blank sheet of paper.

Pocket Gamer: What were your first impression of Casey?

Miguel Francisco: My first impression was "Hey, this is a clever, smart and funny guy. Nice to meet you!"

What are the key visual developments you made to the character to make him Alex?

I remade the character almost completely, but I kept some elements similar, such as his hair. It's not the same, but it still reminds me of the Casey's hair. I tried to make a new character that was still close to Casey's look and personality.

When you started work, did you know he was going to be called Alex?

Our work in progress name was Casey for a little while. Then after some brainstorming, we decided to change the name of the character and the title to Amazing Alex.

For me as an artist, the name was not particularly important. We had a clear briefing and backstory behind the character.

Yes, I think is an important change. 11 or 12 is an interesting age because it's the border between being a child and being a teenager.

It's that moment when kids are listening to heavy metal music and thinking about something called love but still holding a teddy bear in one hand. It reflects Alex's expressions and attitudes. And of course he is trying to dress as cool as possible.

Asides from name and age, are there any other significant differences between Casey and Alex?

I think the biggest difference between them is the background story behind Alex. But that's something we will be revealing in chunks later on, and for now, my lips are sealed.

Can you explain about your working process?

I work both with digital and analog. I used paper and pencils for Alex and the rest of the designs, but I coloured him digitally with my beloved Cintiq [interactive pen display].

Alex is a more realistic boy than Casey. Is this important?

I don't think Alex is more realistic than Casey. They are both pretty cartoony, but the main difference that maybe makes Alex look more realistic is Alex has a more 'traditional' shape construction. 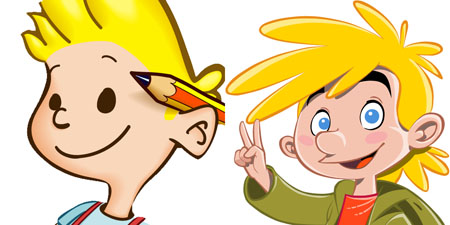 That's really important for us in this case, as we won't have technical problems with the character in case we decide to work in 3D, traditional animation, Flash or whatever other media. Alex is ready and prepared for everything!

In terms of other characters in the Amazing Alex world, were they created once Alex was finalised, or did you design them together?

I made Alex first. Then after the character was approved I made the rest of characters in the world of Amazing Alex.

It was so much fun to imagine "OK, Alex, how do your parents look? And your friends?"

How much iteration did it take to finalise Alex as a character and when did you know when he was finished?

Not much really. I'm not sure exactly, but I think the character was ready after a few hours of work. Then I made a few tweaks after some feedback from the team.

I knew the character was finalised when all the team was talking about the world of Alex and they were discussing some other issues, but not the character. I felt the character became alive at that point

Alex has blonde hair and blue eyes. Doesn't that make him a northern European boy?

I've met so many blonde and blue eyed people from so many different parts of the globe, not only from north Europe. Even from my country, Spain.

I never had any kind of instructions for how Alex´s hair or eyes must look. It was only my decision to make him blonde. His personality and behaviour will make him internationally appealing, not his hair. Like real people.

How different is it working on Alex compared to birds?

Completely different! It was a big challenge to work with Angry Birds and design new birds such as Laser Bird, Mighty Eagle or Ice Bird. The fact that the designer can only work with a few elements like beaks and eyes to give personality and expression to the character makes it a challenge - it's both very difficult and very simple at the same time.

The Angry Birds have such simple shapes that there's no possibility for the character designer to hide behind effects, software or techniques. It's only about the pencil, the paper and you.

And, by the way, I felt excited about the idea of drawing arms and legs again with the Amazing Alex project!

You can read more about Amazing Alex in issue 1 of swipe magazine.

Where to find the cheapest Nintendo 3DS XL

Watch Skyrim being played on a PS Vita

Level of the day: Ball rules