The very first Motorola Defy was a pretty decent blower, even with its sub-1GHz processor. Given that it could be dunked in water, bumped around, and generally treated without much respect - while still offering all of the benefits of an Android smartphone - it was the perfect outdoor phone.

I made good use of the Defy on long, wet walks in the Lake District, and got some good photos from its reasonable 5-megapixel camera. 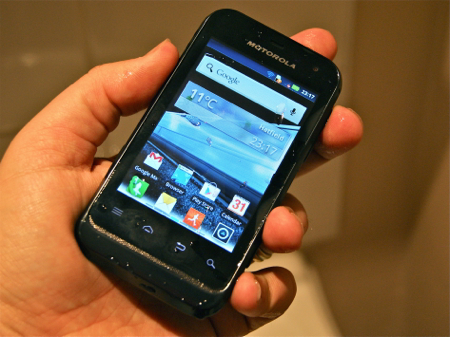 Motorola then addressed the sluggish processor issue by releasing the Defy+. Running a newer version of the Android OS and with a 1GHz processor on board, it was pretty much perfect.

A nicer camera would have been welcomed, but at least it offered a good mix of performance, reliability, and stamina from its larger-than-normal battery.

Going in the wrong direction

So, from the outset of this review, I'm wondering exactly what the point of the Defy Mini is and why Motorola saw the need to take a giant leap backwards. Despite its name, the Defy Mini is taller than the Defy, the same width, and, thanks to a small lip on the back, pretty much the same depth.

What has been cut in size is the screen, both in dimension and resolution. Instead of the original Defy's 3.7-inch, 854x480 display, the Defy Mini sports a 3.2-inch, 480x320 screen and a much bigger bezel. 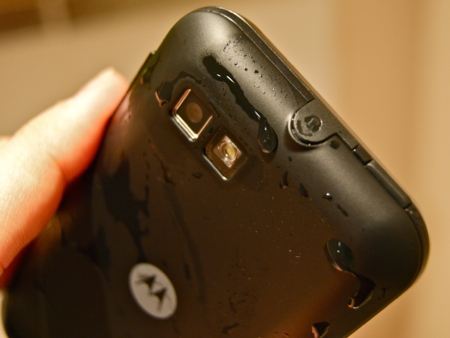 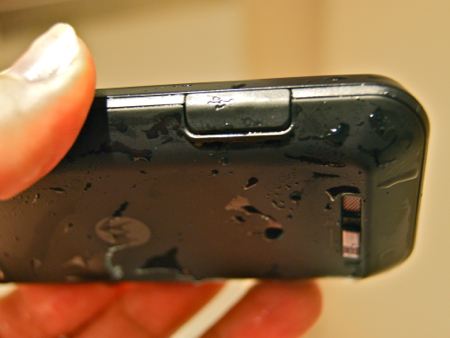 Flip the phone over and you might be excused for thinking the camera is the same, besides the camera sensor and LED positioning being reversed. You'd be wrong, though, as the camera's megapixel count drops from five to just three. You're now stuck with a fixed focus sensor, too, to make things even worse.

The battery cover has also been changed. Instead of being presented with a simple lock / unlock action - with the cover popping off with ease - you now have to use a coin or break a nail to pull off the cover after you've unlocked it.

Do this too often, perhaps to swap SIM or change the memory card, and you shouldn't be surprised to see at least one of the clips breaking, which will probably reduce its ability to resist water. 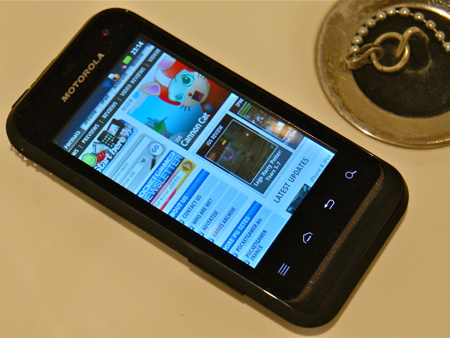 If you're wondering whether Motorola has managed to squeeze a larger capacity battery into the larger shell, stop. It uses the exact same 1650mAh battery found in all of the other Defy models.

To be fair, that's still a good battery capacity, though considering the Defy Mini's battery has a smaller screen, slower processor, and fewer pixels to worry about, it's little wonder the manufacturer can provide figures showing the Defy Mini lasting longer than the Defy+. However, I'd sooner buy a spare battery. 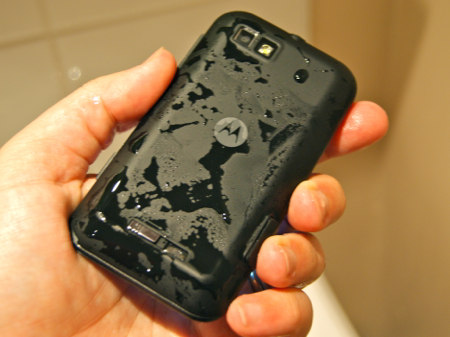 Now, if this review had been written by Jeremy Clarkson, you'd be expecting it to take a sharp turn right about here. You'd go on to discover that the phone isn't so bad, after all.

Sadly, this isn't Top Gear, and if Jeremy did get hold of a Defy Mini, he would probably blow it up inside a caravan. 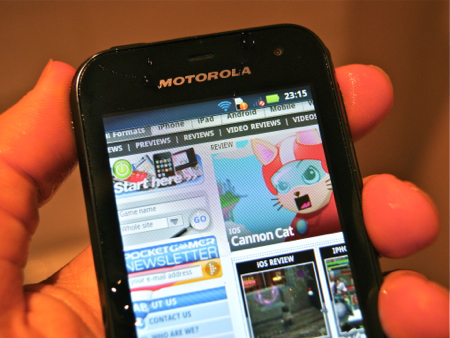 Are there any redeeming features? Well, if you ignore the existence of its better big brother, or cheaper and more powerful handsets like the recently released Huawei Ascend G300 (a high-performance mobile available for just £100, albeit not in the same "life proof" category), then it does work fairly well.

Motorola has managed to cram in the Defy line's traditional 512MB of RAM, which is more than enough to keep multiple apps running in the background without performance hits.

It's pretty clear who Motorola is pitching this phone to. If you're an active person that goes out walking, jogging, or climbing, the phone will happily monitor you every step of the way. After entering your height and weight, it will continually track your calorie burning, and even record your routes.

Other on-board apps include a compass, FM radio, and two music apps: a standard music player and Music+. The latter is the same "connected" music player that has featured on many other Motorola models, giving you access to internet radio, song identification, song lyrics, and more. 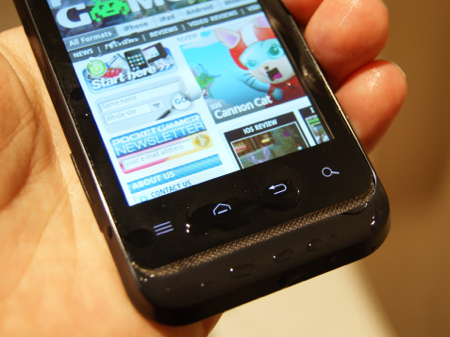 Motorola has even modified the lock screen so you can view upcoming appointments without unlocking, as well as swipe the unlock icon to load the camera immediately.

And this is where I actually noticed not one, but two things about the Defy Mini that are different from the Defy and Defy+. The first of these is the dedicated camera button, while the second is the front-facing camera (which captures 0.3-megapixel images). On the original models, you can only fire up the camera by clicking on the camera app, or setting the phone to launch the camera when double-tapping the home button.

With a dedicated button, plus the quick lock screen access, you can definitely snap images more easily and rapidly on the Defy Mini, but with the lower resolution and the axing of Motorola's own camera interface (in favour of the standard Google no-frills version), your photos are always going to look worse. 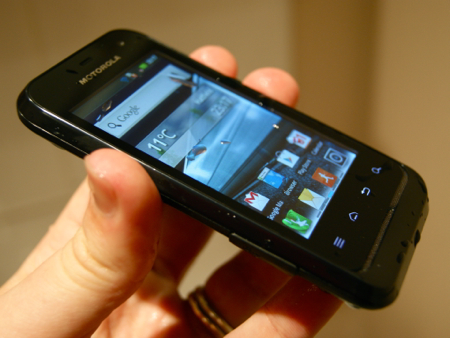 Seen but not heard

To finish off my review, I must point out that the internal speaker is extremely disappointing in comparison once again to the Defy+'s. Motorola usually installs high-quality speakers that enhance music and movie playback, as well as handsfree voice communication, but not here. The speaker is small and tinny, and yet another unnecessary compromise.

If you're still not put off, it's only fair to mention that the same social and activity graph widgets, introduced on the Motoluxe, are present here. These populate themselves automatically, giving you fast access to contacts you engage with regularly, or the apps you use most.

Good as these widgets are, it's not enough to change the fact that the Defy Mini is about a year too late. It should have been the model released before the Defy came along; not the other way around.

Bearing in mind the disappointing (but nowhere near as bad) Motoluxe, Motorola needs to up the specs for its low- to mid-range portfolio, and fast.

The only thing that is 'mini' about the Defy Mini is the display. When placed side by side with a Defy or Defy+, you can see it's actually a bigger phone. 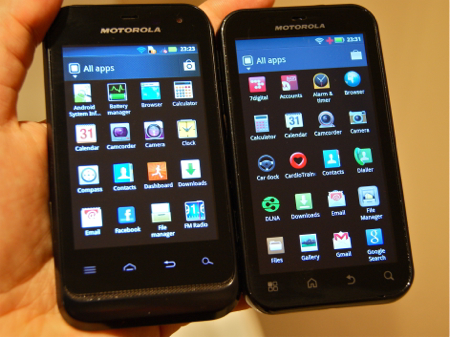 All Defy models will happily go for a swim in shallow water, for up to 30 minutes. 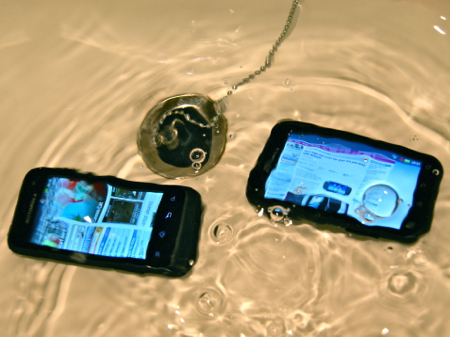 The standard Android camera interface on the Defy Mini is no match for the more advanced version on the Defy and Defy+. 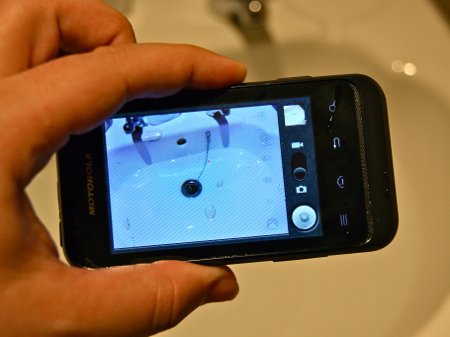 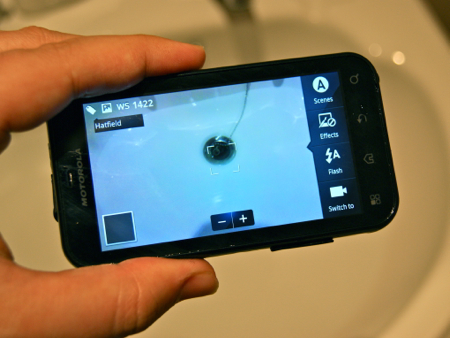 A couple of years ago, this might have been a reasonable offering, with its added dust / water / shock protection. But, it's far too late to be taken seriously now. What's more, it's actually bigger than the original Defy models
By Jonathan Morris
| May 17, 2012 |
Mobile
SEE COMMENTS