It's lift-off for Angry Birds. Having smashed up everything on Earth, Rovio's physics-led phenomenon has catapulted into the final frontier with this cosmic-themed follow-up.

It's the fourth game in the Angry Birds series and marks a complete overhaul in just about every aspect. The game - which is available on iPhone, iPad, Android, PC, and Mac - features new birds, new levels, and even all-new physics.

But a few fundamental elements have stayed the same: You're still catapulting birds at egg-thieving pigs, the game is still chock-full of secrets for you to hunt down, and mastering it will still require our comprehensive guide.

So read on for all the tips, video walkthroughs, hidden item locations, and bird profiles you'll ever need.

Just like the original Angry Birds, this space-themed follow-up depicts a war of bird-versus-pig. In each level it is your job to catapult these kamikaze birds into the pigs's towers, knocking down their houses and defeating the green swines inside.

To play, you need to hold your finger on the bird in the catapult, then drag your finger backwards to build up power. In Angry Birds Space, you can aim your shot by watching the dotted-line trajectory. This lets you see exactly where your bird is going to go.

Then take your pinky off the screen to watch the bird soar through space and (hopefully) hit the pig's house on the right of the screen. To complete each level, you need to defeat all the pigs on the screen before running out of birds.

In Space, each planetoid has a gravitational influence depicted by a giant bubble. When inside this bubble, birds and objects will have their trajectories warped towards the gravity well. This lets you bend birds towards planets and shove objects into orbit. You'll need to take that into account before you fire a bird.

High scores - Getting the maximum three stars on each stage requires a high score. You'll want to cause damage, but be efficient. Unused birds net you an automatic 10,000 points each. Smashed objects give off small, but quickly accumulated points.

Special stuff - There are special objects - like sparkling space mushrooms - that give you lots of points when smashed. Incorporate those into your strategy to earn a higher score.

Get physical - Offset a structure's balance by attacking its weak points and foundation. Remember that some materials are sturdier than others. Wood is easier to smash through than concrete or glass.

Pinch and zoom - Make a reverse pinch gesture with your fingers to zoom out and see the entire battlefield on one screen. This lets you quickly see how far away your catapult is from the pig's base.

Trailblazing - Every bird leaves a trail of dust behind, meaning you can replicate (or slightly deviate from) previous throws without the tedious guesswork.

360 degrees - You don't always have to attack from left to right. By getting stuck in a planet's orbit, you can fire in reverse and swing around.

Dead weight - Wait until your previous bird disappears. If you hit your last bird's dazed body, your attack power will be significantly dampened.

Boy in a bubble - If a pig is floating in a bubble, pop it with a bird and the pig will freeze solid. Wait a few seconds and the icy swine will shatter. You can also shove a bubble pig off the screen to kill it.

Angry Birds Space features a revamped cast of characters. Most of your favourite birds are back with new powers, some older birds are long gone, and there's even an all-new bird to play with.

Despite his super-hero duds, Red is a plain old projectile bird just like the first game. When tapped, he will slightly adjust his course to zero-in on piggies.

This is a kamikaze bird which will rocket at super speeds when you tap on the screen. Your tap makes a purple target, which the bird will dart towards.

Despite its greatly increased velocity, the Lazer bird still won't do much damage to materials like stone and glass. It will rip through wood like it's wet paper, though, allowing you to quickly attack enemies buried deep within a structure.

As always, this is a caustic bird, which explodes when you tap the screen. It creates shockwaves, destroying close blocks and birds, and causing objects to fly through space.

The birds blow up in their own time, but if you tap, you can explode them instantly. Remember, these guys are so heavy that they'll destroy even a large chunk of stone in just one hit.

His new power lets him burn up any combustible materials (wood, essentially) in his blast radius.

Just like in every other Angry Birds, this bird splits into three when you tap the screen.

In Space, the Blue Birds are particularly effective against ice. They'll rip through frozen water with ease.

This big boy is a cosmic wrecking ball. A pot-bellied evolution of the classic red starter, Terence rips through wood and glass like butter, and can take out concrete without too much bother either.

He has the destructive power of the Black bird, just without the explosive finale. His giant size makes it tough to squeeze into tight corners, but he can topple entire structures just by wiping out the bottom foundations.

An all-new bird, specifically made for Angry Birds Space. This guy makes anything he touches turn into ice. A few seconds after he makes contact with a material, he'll explode into a cold cloud that freezes anything nearby. You can expedite that process by tapping the screen.

He works best with Blue Birds (and the game almost always gives you a Blue directly after an Ice bird) because the Blue can smash ice easily. Use them together to cause the most destruction.

To get the most out of this blow-up bird, fire him into a tiny crevice or gap. Then, when he inflates he'll forcibly push everything around him, toppling massive structures in the process.

How to Use - The Space Eagle is an interesting character. For one, this destructive beast helps you skip a particularly difficult level.

Tap the icon, and a sardine can will appear in the slingshot. Fire this into the pigs's fortress and a wormhole will appear. A massive space eagle will shoot out of it, destroying everything nearby. If you pop all the pigs, you'll unlock the next level. 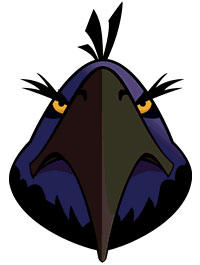 But there's also a secondary goal. Wreck as much of the stage as possible and you'll be given a percentage for total damage caused.

If you score 100 per cent, a little feather will appear over the level's icon on the stage select screen.

How to buy - You'll get 3 Space Eagle tokens for free, and you'll also earn a few tokens for events like defeating boss characters.

But once those are used up, you'll have to shell out real world money to get more. Here's how much they cost:

To buy them, tap on the Space Eagle icon when you run out. A menu will pop up. Tap the quantity you wish to buy and you'll be asked to type in your iTunes password. Do that and you'll have some more tokens to use.

Tip - You can smash up some of the stage beforehand by launching a few normal birds. Or, keep some birds safe as you will get bonus feather points for every bird you didn't launch.

Tip - The sardine can isn't very powerful, so it will just bounce off harder materials like stone.

In the fourth major update to Angry Birds Space, Rovio introduced power-ups. You can use this extraterrestrial arsenal to get a leg up in the battle against the piggies.

Here's how each one works. 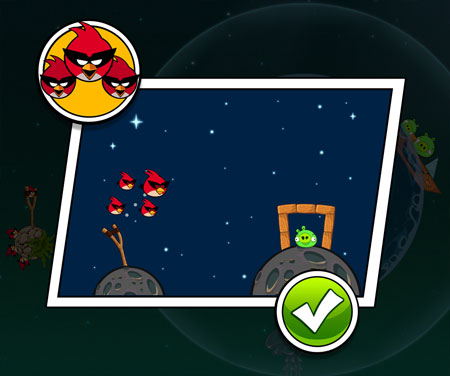 When this power-up is active, your current bird will be joined by a small fleet of tiny replicas to help out in battle. 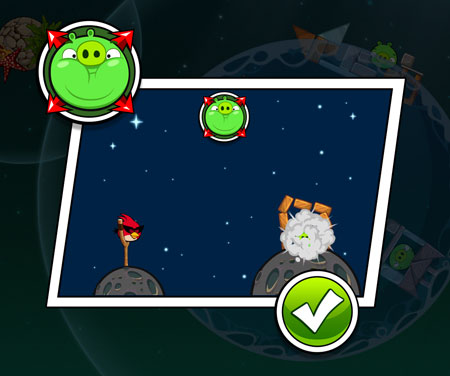 This power-up causes a number of pigs to inflate like balloons. If they are trapped inside a small enclosure, they'll pop. Like balloons. 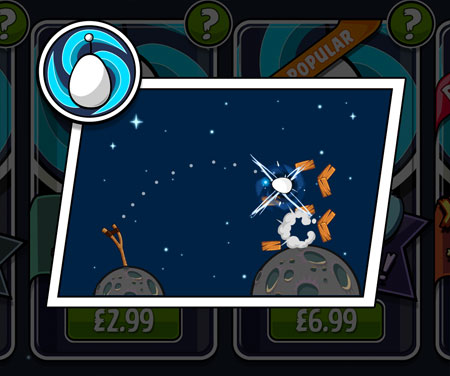 Use this power-up, and your bird will turn into a space egg. When this egg lands, it will make a powerful vortex that sucks any nearby pigs and building blocks into its gaping maw.

Remember: you can only use one of each power-up during a level attempt. Also, you only have a limited number of each power-up. So, if you run out, you'll need to buy more.

You can buy them with in-app purchases. Each power-up can be purchased in packs, ranging from £1.49 to £13.99. You can also buy a goodie bag with all three, at the same price points.

In Angry Birds Space, levels are packaged into planets like Pig Bang and Cold Cuts. Click on an icon to go to that planet's page, where you'll find information, video walkthroughs to every level and boss strategies. 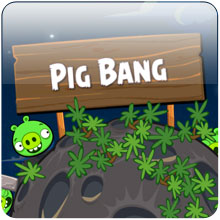 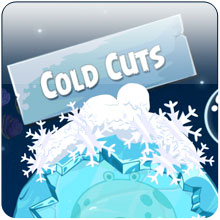 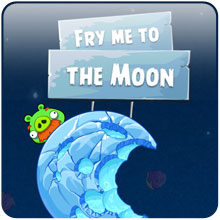 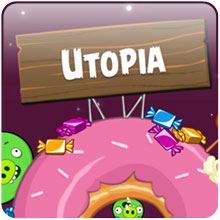 Fry Me to the Moon - Utopia 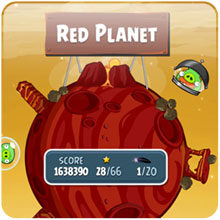 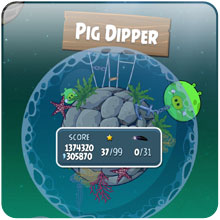 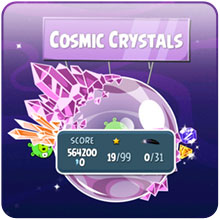 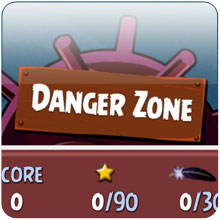 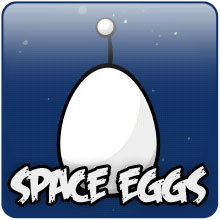 In some levels, you'll spot a special eggsteroid. If you smash them open with a bird, a wormhole will appear, which takes you - mid-stage - to a special bonus level.

You can always play these levels again by tapping the Eggsteroid planet on the stage select screen.

Click here for our eggsteroid guide, where we'll tell you which levels hide golden eggs, show you where the shiny blighters

are hiding, and then explain how to beat the bonus level you've just unlocked.

This page also covers the Martian rovers, which replace Golden Eggsteroids on the Red Planet level pack. Find out how to find the rovers, and beat their bonus levels, inside.

Plus, this page will cover the NASA spacecraft, which replace Golden Eggsteroids on the Beak Impact chapter. You'll find out where to find these classic interplanetary explorers.

Grab yourself some Angry Birds games & gifts at our Amazon store.

Want more? Check out our 19 other Angry Birds Space tips, guides and walkthroughs!

Fat Princess: Piece of Cake is a match-three RPG tie-in that's in soft launch in Canada for iPad and iPhone