The danger of an Angry Birds sequel was always that it would feel like just another expansion. Rovio's content drip feed has kept the original avian flinger at or around the top of the charts since its release, but for a sequel to make its mark it needs to do something different.

To find that extra spark, Rovio has gone back to basics. In fact, it's retreated to the fundamental building blocks of the universe.

Gravity lies at the core of this new bird-hurling extravaganza, and while Angry Birds Space is certainly a snappy name this is more about the interstellar objects than the inky blackness that surrounds them.

Mechanically, not much has changed. You're still using a catapult to fire your disgruntled feathered ammunition in the direction of some egg stealing pigs, and tapping on the screen still engages different birds' super powers.

But now the action takes place across planets and asteroids, rather than the flat land of the original. Each of these planetary bodies has its own gravity field, represented by a halo of white that extends around it.

Getting caught in these fields will drag your bird towards the cause of the space time distortion, which opens up whole new avenues of gameplay possibility.

Now you're thinking with space-time distortions

Soon you'll be slingshotting around moons, using their gravitational pull to assault a pig structure from behind or careening into smaller objects to bash them into the unwary snouted thieves that lurk on the planet below.

Intricate chain reactions that nudge debris into the gravity well of a planet are joyous to behold, leaving you urging that final lump of space junk to get sucked down and wreak its destruction on the last pig standing.

There are boss battles, too, which see you crashing your birds into TNT and loose rocks to try and hit the King of the pigs as he scrambles around in his Dr Robotnik-style walker contraptions.

The newest bird, which freezes obstacles it comes into contact with, fits into your aviary nicely. Levels are expertly designed, with multiple paths of attack, and gold stars awarded for the precision of the destruction that you unleash.

In space, everyone can hear you chirp

There are some missteps, though. Space Eagles are items that you collect in-game or buy as in-app purchases which create warp holes in the levels, sucking any nearby pigs to oblivion. Compared to the intricacies of the rest of the game, they feel a little tacked-on - a get out of jail card that's not really necessary.

And on smaller screens, the controls can be a little twitchy as well, and sometimes taking your finger off the screen to fire a shot registers as enough of a movement to send your hapless bird floating off into the abyss.

60 levels are included from the get-go, with a super hard add-on available to buy for the masochistic. And there are regular free updates promised too.

Angry Birds Space is a worthy addition to Rovio's ever-expanding empire. It's not revolutionary - its biggest ideas are borrowed from some of the first games ever made - but it manages to recapture the destructive thrill that made the original so essential, while neatly avoiding the trap of repetition. 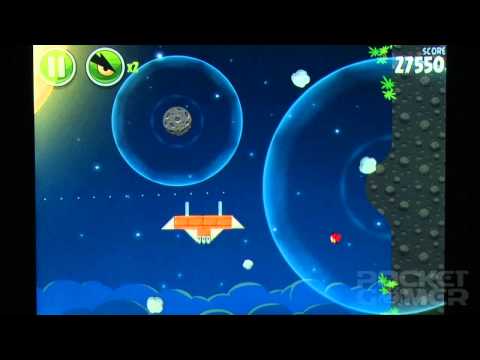 Want more? Check out our 70 other Angry Birds Space articles!

One small catapult for a bird, one adequately sized leap for Rovio's world-beating series, Angry Birds Space is as much fun as its predecessor, and adds enough new concepts to keep even the hardiest fans entertained
By Harry Slater
| Mar 22, 2012 |
iOS + Android
Find out more about Angry Birds Space

Movie adaptation The Hunger Games: Girl on Fire sprints onto iPhone and iPad