The long history of the platforming genre is littered with games that don't make sense. Hedgehogs aren't fast, bandicoots don't wear trousers, and Italian plumbers are rarely called in to retrieve kidnapped princesses.

This trend for incongruity has been maintained by iOS developers, who've treated us to platformers that turn the birth of jazz into a time-slowing leap-a-thon and feature pizza delivery boys who take pride in delivering pizzas.

Now we can add Super Lemonade Factory to that list. It's a game that uses the economic aftermath of the second world war as a backdrop, and tasks you with traversing its titular lemonade factory in order to secure your job as manager. French revolution?

You play as Liselot and Andre, a pair of newlyweds pulled away from their honeymoon by the impending death of Andre's father. Andre is set to inherit the family fizzy drink business, but he needs to learn the ropes first.

That rope-learning doesn't involve the creation of any sugary beverages, but rather working your way through 36 increasingly difficult levels to earn the respect and support of the people who work in the factory.

You'll need to swap between Andre and Iselot to complete your task, swiping across the screen to do so. Iselot can push crates, talk to people, and perform double-jumps (as all French women could after the war), whereas Andre can smash packing boxes and give his wife a piggyback.

On-screen arrows move you left and right, with a pair of buttons letting you jump and perform a character's special ability. Each level is designed as a gentle puzzle that requires you to combine the pair's efforts if you want to succeed.

While getting both Liselot and Andre to the exit will move you on to the next level, completists will want to collect the bottles that are hidden around the factory and talk to the various workers.

Finding all the bottles unlocks Hardcore mode, which turns the relatively sedate levels into feverish nightmares full of split second leaps and deadly spikes. Speaking to people, all of whom will kill you if they touch you, gives you an insight into the running of the factory and the bizarre personalities of its employees.

All fizz, no pop

Everything is wrapped up in a twee, pixellated package that fits its strange subject matter perfectly. The character art is dripping with retro charm, and the only misstep is a slightly out of place chiptune soundtrack that feels at odds with the rest of the presentation.

In spite of its intriguing look, the game never quite manages to spark into life, and samey level design doesn't help. You'll have polished the easy ones off in an hour or so, and the lack of surprises is telling.

Super Lemonade Factory is a lot of fun while it lasts, and the character-swapping mechanic adds an interesting layer of puzzling into the mix. It's just a shame that, even with all of its quirkiness, it can't quite push on with its ideas and build a more interesting final product. 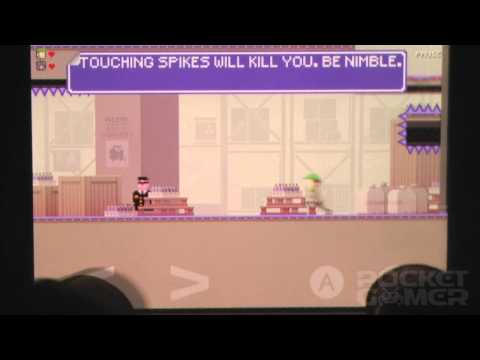 Come and get your drinks as Super Lemonade Factory goes free