Forget the pizza part of the equation for a minute - it’s irrelevant. Actually, while you’re at it, forget the skeleton part too.

Sure, Pizza Vs. Skeletons features a colossal pin-wheeling dough ball and a troop of undead antagonists, but they’re mere daft dressing on a mini-game collection that’s build around a simple, elegant, and dizzily entertaining core.

Tap the screen and pizza jumps. Tap again and it crunches to the ground, usually in a blaze of broken bone.

It’s satisfyingly tactile and wonderfully responsive - easily offering one of the best implementations of tilt-controls we’ve seen on iOS.

It’s got an irresistibly chaotic charm as you hurtle violently across the game’s 100-odd stages. Developer Riverman Media has crafted an array of delightfully bizarre mini-games around its wonderfully tactile setup - frequently surprising in their creativity, yet rarely overcomplicating the game’s robust core.

In one level, you’ll be smashing through waves of skeletons in a mildly strategic take on the side-scrolling beat-‘em-up. Next, you’ll be thundering over trenches scouting for puppies or careening down snow-covered mountains with skeletal skiers in tow.

No matter what deranged objective Pizza Vs. Skeletons belches up, though, its finely tuned tumbling ensures it’s always an absolute blast.

And any game that rewards your hard-earned victories with a chance to turn your bog-standard pizza into a cowboy hat-wearing doughnut with vampire teeth and fairy wings is okay with us.

That sublime sense of absurdity is bolstered immeasurably by Pizza Vs. Skeletons’s stellar presentation.

It’s a visual treat, with sumptuously detailed and appropriately off-kilter artwork - and its looks are ably matched by a catchy soundtrack that’s as schizophrenic as the rest of the game. 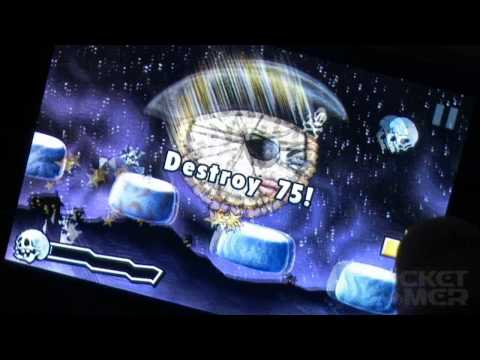 Play Lume, SpaceChem, and the rest of the IGF nominees for free on your Android-powered device via OnLive

Pizza Vs. Skeletons receives ten new levels, goes on sale for 69p/99c until May 7th