With Near, Sony has baked social networking right into the Vita. Wherever you are, you can see who's playing games around you, and then connect and share with them.

The built-in application, which uses the touchscreen, is simple and intuitive to navigate, and offers an easy way to keep in touch with your Near updates, which are organised into three categories: Friends, Out and About, and Discoveries.

Friends is a running commentary on the activities of everyone on your Friends list. As well as telling you what Trophies you've earned, this list keeps you apprised of the games you've installed and played. There's even a record of online activity, such as races or matches, scores, times, and more.

Every time you log your location with Near, which can be done manually or automatically, the Out and About and Discoveries lists are updated.

Out and About is a rundown of the locations you've visited recently and how many players were in the area. For each, a cute radar view shows a selection of those players' avatars and their playing histories. 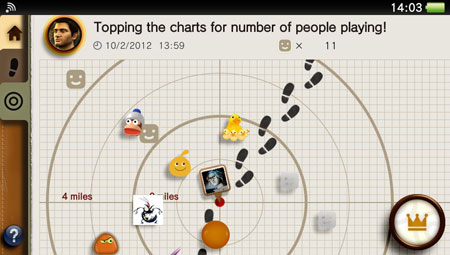 For Near, 'near' means within a kilometre. In Akihabara, Tokyo's geek Mecca, this equates to more than 2,000 players online nearby. The figure drops to fewer than a hundred in the still densely populated suburbs.

Game Goods and Players you've met are summarised under Discoveries. Downloadable Game Goods could be anything from ghost replays (in a game like Ridge Racer) to collectible items (like Rayman Origins) to costumes, depending on the game.

Players you've met are those you actually encountered in a game, rather than those who've simply been in your vicinity. Near shows how many times you've met each Player and gives a helpful compatibility rating.

At any time while browsing, if you see a game's icon you can tap to see the related Players' Voice pages. This is where everyone can view and share their emotions.

Going further than a single Like or Star, the system lets you choose up to three from a handful of feelings. Touch My Katamari, for example, is 35 per cent Funny, while Everybody's Golf has a 30 per cent rating for both Exhilarating and Engrossing. Unfortunately for us whinging Poms, the choice is limited to positive vibes.

Sony is definitely aware of the creepy stalker potential with Near, so thankfully there are plenty of options for limiting the details that are shared with Friends and the wider world.

The best feature of Near is the way in which it's been integrated into the games, letting you find people to play with, share in-game items, and so on. Its integration is so seamless and comprehensive, in fact, that you may end up forgetting that there's a separate Near application at all.