Out next week: League of Evil 2, Beat Sneak Bandit, and more

We spend too much time in the past at Pocket Gamer. We talk incessantly about games that are already out, and coo nostalgically about the games of days gone by. It's about time we started looking ahead.

So, welcome to a new regular feature. Every Friday, we're going to finish off the week by looking ahead and previewing the best-looking iPhone and iPad games that are just over the horizon.

Next week is a showdown between two indie darlings. Hard-as-nails platformer League of Evil is getting a welcome sequel, while Scandinavian heartthrob Simogo is going to blow us away (again) with the ultra-funky Beat Sneak Bandit.

Note: Dates, prices, and features are subject to change at the whim of the developer and Apple's approval team.

League of Evil 2
By Ravenous Games, out on iPhone and iPad on February 16th 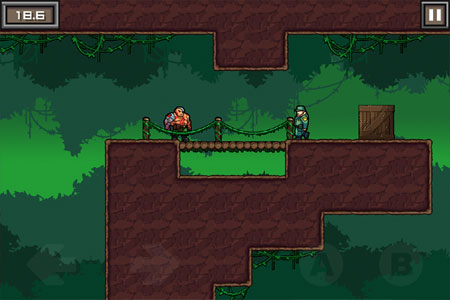 There's one very obvious difference between this game and its masochistic predecessor League of Evil. The latter's chunky pixel-art aesthetic has been ditched in favour of hand-drawn art, doodled by Elusive Ninja developer Bulletproof Outlaws.

But, despite that change, creator Ravenous Games promises that the real core of the game has been left intact. So, you can expect the same tight controls, that brutally hard gameplay that we loved (and sometimes hated), and those familiar bite-size stages.

Even the premise of the game is the same - a beefy half-metal super-soldier jumps about stages in an effort to punch malevolent scientists in the face. All the old enemies will make return appearances, too, including the G.I. Joe guys with pistols, and those annoying ninja blokes with laser swords.

There is plenty of fresh material, mind: new hazards like snakes, snow yetis, and electric floors; new areas like nuclear facilities, a desert, and a cityscape; and bosses. In all, there will be about 100 stages packed with new and old stuff that's trying to kill you.

The game will be a Universal app, and support the iCade arcade cabinet. Word is that the game will be just 69p when it hits the App Store on February 16th, as a special launch promotion.

Beat Sneak Bandit
By Simogo, out on iPhone and iPad on February 16th 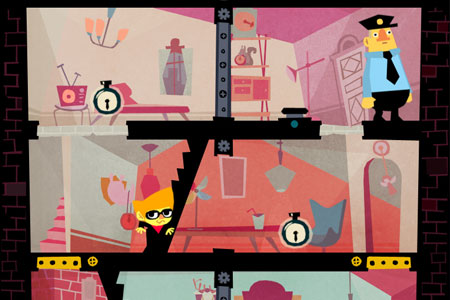 The Clockwork Mansion of Beat Sneak Bandit works like, well, clockwork. Spotlights click on and off to the beat, dopey guards plod backwards and forwards to a ceaseless rhythm, and trapdoors spring open once every bar.

This gives our eponymous hero - a vigilante tasked with saving the world's timepieces from Duke Clockface - a fighting chance of making it through the mansion unseen.

In each stage, you only need to tap the screen to make Bandit move. He'll automatically step forward, zip up stairs, and turn around when he comes to a wall. The catch is that you have to tap in time to the backing track's beat or Bandit won't budge.

Which means timing is absolutely critical in this game. Tap the screen out of sync and you could lose bonus points or even get seen by a guard, instantly ending the level. On the other hand, not observing the rhythmic pattern of trapdoors and spotlights can quickly lead to your downfall.

This is no easy game. But, once you get to grips with Beat Sneak Bandit, bounding through its most difficult levels with nothing more than a series of touchscreen taps carries a very satisfying thrill. And keeping your cool while surrounded by hazards offers a sense of tension that's familiar to any Metal Gear sneaker.

The whole thing is wrapped up in a darling art style (though, what else do you expect from the Scandinavian studio responsible for Bumpy Road) and, obviously, has great music. The whole package is fresh and fun: an easy recommendation.

Word Trick
By Outplay Entertainment, out on iPhone on February 16th 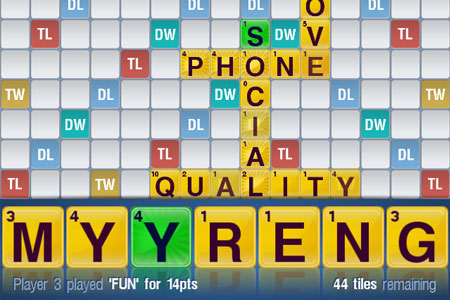 If two's company and three's a crowd, then what does that make four? Maybe Word Trick, a four-player version of Words With Friends, can help us find an answer.

It's Scrabble, essentially. You're given a random handful of letters, and it's your job to worm out words and then plop them on the board so that they intersect other tiles. I'm sure you don't need me to explain how Scrabble works, but it's too late: I just did.

Like Zynga's wordy word game, Word Trick has asynchronous play. That means: (1) you don't need to stick around while your opponent uhms and ahs about vowel placement; and (2) the game will nudge you with a push notification when it's your turn. You can have 21 separate games on the go, with pals (or random strangers) on Facebook or other iOS users.

The twist (or, trick, if you will) is that some tiles are coloured green, and you'll get bonus points when you use them in adjacent spaces. This adds an extra layer of depth to the regular Scrabble experience: on top of finding ways to intersect words, and harnessing triple word score bonuses.

Word Trick has been rather popular on Facebook, but you'll be able to grab it on iPhone from next week. There'll be a free ad-supported version, and an premium edition with no adverts for 69p.