Year of the Dragon: The Angry Birds Seasons guide to Chinese New Year

The latest update celebrates the Chinese New Year, where more than one billion people get the date shockingly wrong. Rovio has decked out 15 levels with Chinese symbols like fireworks (that spiral off and explode when hit), lanterns, and pigs in fetching rice hats.

You also get access to the destructive Mighty Eagle - now Mighty Dragon, fittingly enough - for free and a good old Golden Egg. Read on for clues to beating every level, making use of the dragon, and finding that pesky egg.

The Mighty Eagle usually costs you 69p / 99c, but its Chinese New Year counterpart - the fearsome Mighty Dragon - is given away free with this pack of 15 stages. There are two ways to use it.

The Dragon can help you skip levels by essentially dropping into the level and wiping out nearly everything on-screen. This is really helpful if you're stuck on a level, but there are two caveats: your shameful skipping shows up on the level screen, and you can only call the Dragon once per hour.

Top tip: Set Angry Birds Seasons to send push notifications (go to the main 'Settings' app of your iOS device, under 'Notifications'. Let the game send you alerts, even on the Lock screen) and the game will alert you when the Dragon is available.

The Dragon will also show up when you complete a stage and go back in. This offers up a second way to play: how much of the level can you destroy with the Dragon? Use the birds to smash away as much debris as possible, then tap the eye icon in the top left.

Your catapult will have a fish token in it. Fire it into the middle of the stage and the Dragon will swoop in and cause chaos. You'll be graded on how much destruction you cause. If you earn a perfect score (a.k.a. 100 per cent), a fish icon appears on the level select.

There's only one Golden Egg to hunt down in Year of the Dragon. It's in the final stage, though, so you'll need to work hard to get it. Once it's yours, an egg will appear on the screen to the right of this season's level list. Tap it to play a fun bonus level. 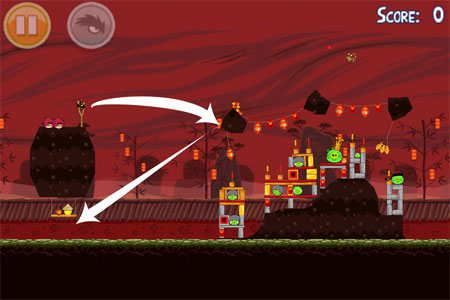 The Golden Egg is easily visible. It's on display, right beneath the catapult platform. Problem is that the floating rock which holds your bird-flinger is so big it stops you from getting a good shot. We need to take a different approach.

Fire a bird (the huge, red Big Brother birds are bounciest) at the left-most part of the pigs' fortress, so it rebounds off and bounces into the egg. It will take a few goes to get it, but you've got three different birds to try with each time.

It will, more likely than not, take a number of goes to get this right. It's perhaps more luck than skill, but keep at it and the egg will be yours eventually. 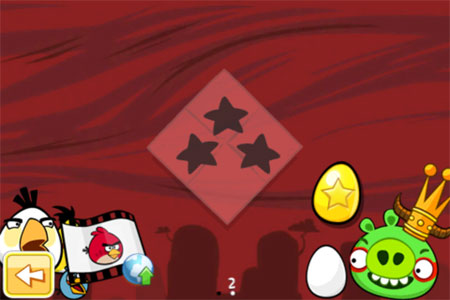 To get this egg, you'll need to earn three stars on all stages in the Year of the Dragon theme for Angry Birds Seasons. Good luck!