Sony is clearly going after the hardcore with its PlayStation Vita. Everything about it is designed to bring the experience of home console gaming into a portable.

Its ambition to please hardcore gamers is perhaps most evident in the presence of its two analogue thumbsticks. Proper thumbsticks, too - not the ghastly nub that blighted the PSP.

While a lot smaller than the sticks on a PS3 controller, they're no less accurate. They're also a lighter touch - very little effort is needed to move them and they're very sensitive. Just don't try pushing down on them, because there's no L3 or R3 like on the PS3's DualShock controller.

The D-pad and the traditional set of four PlayStation buttons are considerably smaller than the PSP's controls, but they're still comfortable to use. There's plenty of space between them, and they have a solid, clicky feel.

Buttons that were below the screen on the PSP have moved. The PS button is now on the left, and Start and Select are to the right of the screen, just below the thumbsticks. They sit flush with the flat front of the Vita, so there's little chance of accidental presses during frantic gaming. 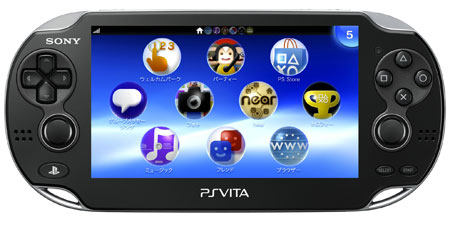 The shoulder buttons are the familiarly wobbly clear plastic from the PSP. The only differences are that they're slightly greyer and have been rounded off to fit the 'super oval' shape.

In a style reminiscent of some smartphones, the flat face of the Vita is surrounded by a metallic ribbon. In the bottom corners this forms eyelets, presumably for attaching straps.

Along the top of the unit are the circular volume buttons, which wouldn't look out of place on an iPhone, and a similarly sturdy power button. Between these, a pair of port covers pull out and spring about in a way that PSP owners will recognise. One hides a slot for the new Vita game cards, and the other hides a cleverly named Accessory Port.

The new charging and connection port is on the bottom in the centre, just next to a headphone jack. Just behind these are the mic and another bendy port cover securing the memory card.

Hewn from a single piece of flat, shiny plastic, the Vita is dominated by its 5-inch screen. All of its wondrous OLED 960x544 pixels are clear, bright, sharp, and pop with colour, even under bright lights.

It's still no match for direct sunlight, however, so you'll probably want to find some shade on a sunny day.

One slight concern is the position of the stereo speakers, just next to the thumbsticks. When playing, idle thumbs occasionally come to rest over the speakers, blocking the sound.

Most of the rear is taken up by the touch panel, which is decorated with rows of tiny circles, squares, triangles, and crosses. The touch panel is almost too sensitive, requiring only a feather-light touch to activate it. It's also able to discern between light and heavy taps.

Large textured dimples rather near the left and right edges seem to suggest that fingers should be placed there, but even small hands are likely to find it more natural to stretch out onto the touch panel.

Pocket Gamer's Vita, fully laden with a memory card and a game, weighs 283g. That's almost 100g more than the PSP, but it's comfortable to hold and feels solid and more expensive than its plasticky predecessor.

Sony has cut no corners on the inside, miraculously cramming in a quad-core ARM Cortex processor. That's one more core than an Xbox 360. And the 512MB RAM is twice that of the PS3. This extra power brings features like cross-game chat and full access to the menu, settings, and other applications without your having to quit your game.

It's also more than enough to keep fast-paced racers speeding along smoothly, characters looking handsome, and to create lighting and other visual effects usually preserved for the big screen.

The rechargeable, and unremoveable, 2100mAh battery is advertised as lasting four to six hours depending on conditions. In a real-world test, we played Uncharted: Golden Abyss from a full charge and the Vita shut itself down four hours and 17 minutes later. Not too shabby, although brightness was at the lowest setting and all of the wireless functions were switched off. A full charge takes around an hour and a half.

Another unique Sony experience is finding that your new console has no internal memory. Most games won't even load without a memory card installed, so picking one up is compulsory.

Fortunately, after just a few weeks on sale in Japan even big-name retailers have dropped the prices of these proprietary cards by ten per cent or more. We wouldn't be surprised if the Vita memory cards hit UK shores at more palatable price points.

In terms of photography, the Vita won't be replacing your camera with its front- and rear-facing 0.3-megapixel cameras. Both video and still shots are dismally drab and wishy-washy on the bright OLED screen.

The cameras are primarily for use with the console's augmented reality features, in tandem with Sixaxis motion controls. Of course, these vary from game to game, but the gloomy camera images often starkly contrast with the bright, cheerful game graphics.

There are two models of Vita available - one with both 3G and wi-fi connectivity, and one with wi-fi only. 3G data connectivity will be provided by Vodafone in the UK, with pricing yet to be announced.

The wireless connection is used to connect to the PlayStation Network, for online play, chat, and access to the PSN Store. The Vita won't make phone calls, even if connected to 3G.

The Vita can also use Bluetooth to connect to headphones or microphones. It isn't compatible with other devices, like keyboards or phones, so there's no cheeky tethering.

If you've ever used a smartphone, the LiveArea OS will be instantly familiar - just more cheerful. Navigation is achieved only via the touchscreen. Forgoing boring flat tiles or icons, the home screen is populated by colourful bubbles. These bubbles lead to LiveAreas, rather than directly to apps or games, and the transition is smooth and quick.

On a LiveArea screen you'll find links to any websites, DLC, manuals, and updates, if available. They also tie in to PSN, showing updates of your progress through the game, including trophies gained. If your friends have been playing the same game, their updates will appear too. Fortunately for privacy advocates, there's the option to limit or stop sharing info.

You can run most other applications while your game remains paused in the background. Disappointingly, you can't pop over to the web browser mid-play.

Overall, the Vita is well polished and works wonderfully smoothly, but there are still some teething issues. Pocket Gamer's Vita has crashed while in standby and refused to switch on no fewer than four times in two weeks. In different situations, with or without a game, while plugged in or not.

No doubt Sony will eventually issue an update to solve this issue, but before it does it ought to stop denying that it's happening.

The success of any console is going to depend on the software that's available. The extraordinary popularity of the Monster Hunter series has buoyed sales of the PSP in Japan.

Clearly Sony is trying to bring other big franchises to the Vita in the hope of finding that secret recipe for success in the West, too.

PSP veterans LittleBigPlanet and WipeOut are returning. New kid on the block Uncharted has made an excellent first impression. And let's not forget that there's a large catalogue of downloadable PSP games that are compatible with the Vita, too.

Sony has created a cutting-edge gaming platform with the Vita. Thanks to some fantastic launch titles it has already proven itself more than capable of delivering a home console-like experience.

The jury may be out on whether there's still a market for a device like the Vita, but - teething problems notwithstanding - there's no denying the sheer quality of the machine and its software.

The Vita is an amazing piece of kit. A beauty on the outside, but an absolute beast within. Seeing such performance in so tiny a package will blow you away.
By Alan Purvis
| Jan 18, 2012 |
PS Vita