Indie is what I need

If you want to put your finger on the pulse of the indie gaming scene, there's no better barometer than the Independent Games Festival's annual awards.

Each year the judges pick out top games from small developers, focusing on imaginative titles with experimental ideas and off-beat, arty vibes.

Nothing quite sums up the year in indie like the IGF's finalist run-down.

While most of the games are made for Mac and PC, a few iOS titles have managed to sneak in. Either under the official "Best Mobile Game" category or, boldly enough, into the main categories with all the "proper" PC indies we pretend we've played.

"Spelunky? Sure! Love it! Is there an iPad version coming out?"

Being the curious cats that we are, we decided to investigate the iPhone and iPad games amongst the IGF's finalists - playing those that are out and looking at the upcoming ones to pick the ten best mobile games on the list.

Pocket Gamer extends the best of luck to all the iOS indies up for an award. Show those rotten PC developers how it's done.

The winners will be announced at a ceremony at the Game Developers Conference in early March. 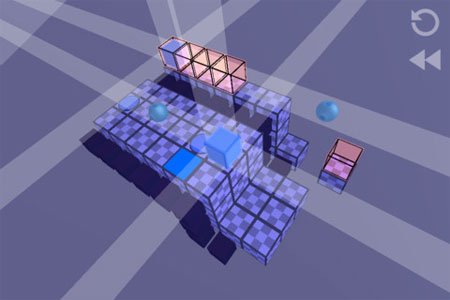 (Finalist - Excellence in Design)
By Increpare - Buy on iPhone and iPad

If the name suggests something friendly, the game most certainly is not. This often counter-intuitive puzzler bends the rules and has a most nasty disregard for comfortable, real-world physics.

You're a square that flip flops along abstract cubes, batting spheres into boxes. Easy enough, until you start exploring the third dimension and begin fiddling with bizarro-gravity. It's deviously hard, but you won't stop until the level's complete. 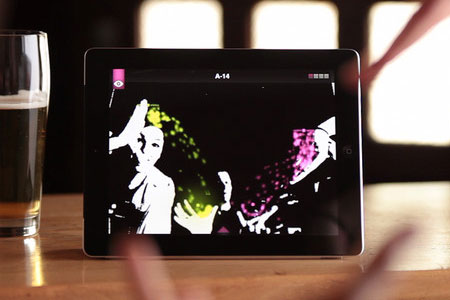 An augmented-reality puzzler that uses your body as the play space. The iPad's front-facing camera turns you or your cat into blocky, abstract art. You then use your limbs (or cat) as ways to redirect falling liquid into coloured buckets.

It works best as a party game, with as many players as you can possibly position in front of an iOS device. Then by working together, squabbling and punching each other in the neck you might just beat the stage at hand. 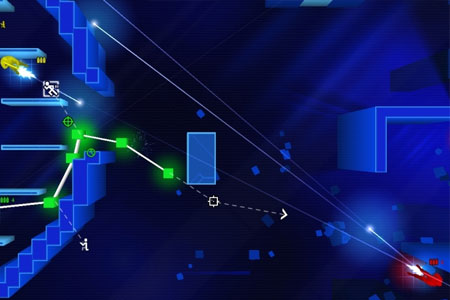 This tactical epic strictly refuses to be pigeonholed into a recognisable genre. It's not exactly turn-based but it's not real-time either. You and your opponent plan your next move at the same time, and then both sides will play out those choices simultaneously.

This means you can't watch what your opponent just did and react accordingly. You need to guess how your opponent might react, stop yourself from playing into their hand and use bluffs to outwit enemies. It's a wholly unique take on tactics.

It's set in a near-future city, and is drenched in cool blues and punctuated by primary neon hues. A backing track of feisty electronica music orchestrates those multiplayer skirmishes and a full singleplayer campaign. 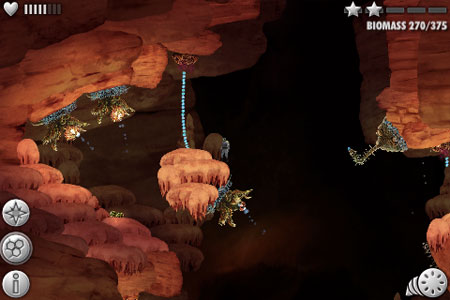 We've been waiting for a follow-up to the artful and elegant Spider. Here it is, with Tiger Style's campy 70's sci-fi platformer Waking Mars (nee Lost Mars - since changed to divert any trademark lawyers who might be snooping about).

Billed as an "action-gardening adventure", Mars is about an explorer who makes contact with extraterrestrial life on the red planet. Using a sack-full of seeds he must cultivate an alien ecosystem and grow helpful puzzle-solving plants. 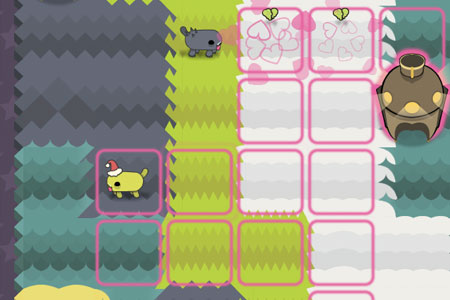 At first glance, Pugs Luv Beats might look like a time-wasting app you'd fiddle with on Facebook. Cute dogs bound about alien planets, dutifully growing beets until you've got enough veggies to buy more buildings, planets, costumes or hats. It's all about steady optimisation and patience.

But at first listen, it's obvious that Pugs is not your average FarmVille clone. Every action in the game - the pugs "luving" beats, the dogs stomping across grass or swimming through sea - makes a different noise.

In harmony these audio files come together to construct an organic, personal score to your cosmic beat farm. Pugs build a drum beat as they pad across grass, or make a harmonic chorus as they splash through water. By the end of the game you've made both a beet factory and a beat factory. 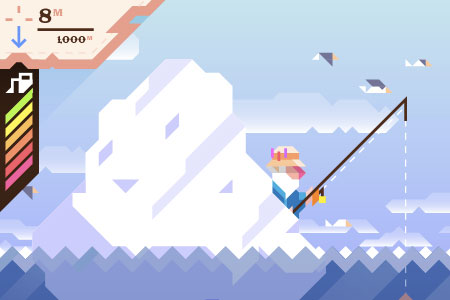 Here's how Ridiculous Fishing works. You cast your lure into the sea and carefully navigate it towards the ocean floor, weaving in and out of fish as you go. If you reach the bottom or snag a fish, the line stars whipping back towards the boat.

Now it's about catching fish rather than avoiding them. As you bounce back to the surface you want to nab as many marine animals as possible. Your angler man then tosses them all into the air and you shoot your catch with a shotgun. Make sense?

Its Flash predecessor - Radical Fishing - was wonderfully clever and its unscrupulous iOS clone - Ninja Fishing - was dangerously addictive. The final version should be the best yet. 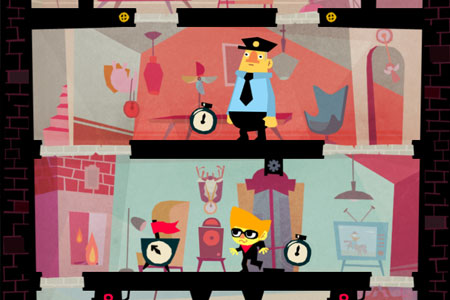 Charming Swedish developer Simogo knows the power of simple controls. A quick tweak of your finger helped you trip the circumference of an entire planet in Kosmo Spin, and one finger was all you needed to upset the ground in Bumpy Road.

Likewise, quick taps will get you through the mansions of Beat Sneak Bandit. But the rhythm and speed of those taps will decide whether our thief hero escapes or gets caught.

The entire mansion moves like clockwork with sliding doors, spotlights, and security guards working to an ever-present beat. You've got to feel the flow and work to the rhythm to beat the level unscathed. In our preview we called it "an incredibly polished, smart, and fun game." 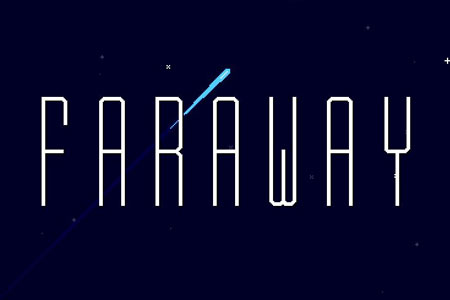 Playing as a speeding, runaway comet, you might think that control is out of your hands. And it is, for the most part. But by grabbing hold on nearby stars and getting trapped in their gravitational snare you can swing around in circles to throw yourself in new directions.

That's the way you get about in the procedurally-generated cosmos of Faraway, from the creator of Eliss. And you use this skill to draw constellations in the night sky - each of which you draw gives you more time and boosts your score.

A white arrow points to nearby clusters of stars. Once you plunge into the heart of a cluster you leave a trail behind, which you'll want to snag on stars to make beautiful constellations. If you touch your own trail, like Nokia time-sink Snake, you exit the cluster and whizz off to connect more stars... 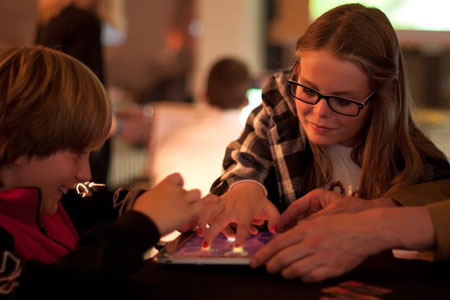 Depending on who you play with, Fingle could be a thrilling or a slightly awkward game. Best summed-up as Twister for your fingers, this is two-player iPad app about using all five pinkies to shunt squares into spaces.

As you navigate the board with another player, you'll often find yourselves touching skin and doing slightly suggestive gestures towards each other. So consider this a warning: don't invite your Gran to have a game of Fingle. 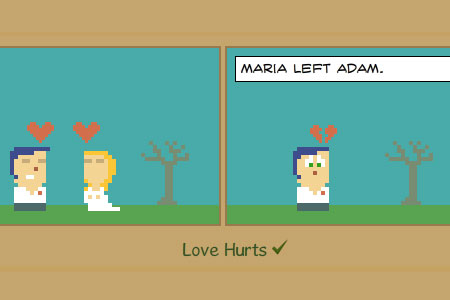 Arty indie dev Daniel Benmergui promises that Storyteller is "more gamey" than his previous releases, like Today I Die or I Wish I Were the Moon.

The game gives you some text below empty comic panels. You must use the icons below - people, props, grave stones, chests, and weapons - to illustrate the text and convey its meaning.

How the story plays out depends on who you place in each panel, the personalities of the characters, and new events that transpire. It's an experiment in causality, and while we can't fathom how it will work as an actual game, we can't wait to try it ourselves.

Best of the rest

Other iOS games in the IGF finalists include Amanita Design's Botanicula in Excellence in Visual Art and ASYNC Corp in Best Mobile Game.

The App Store honourable mentions were SpaceChem for the Grand Prize and Excellence in Design, and Hundreds, iBlast Moki 2, Temple Run, and Tentacles for Best Mobile Game.