The success of iPad has encouraged every OEM, whether mobile- or PC-based, to come up with its own version.

That no company - with the exception of online retailer Amazon - has come up with viable competition just demonstrates how difficult it is to juggle variables ranging from a device's technical specification to operating system, and app ecosystem to (especially) price to form a coherent package that will catch consumers' attention.

It's a lesson Canadian phone maker RIM has learnt hard with its BlackBerry PlayBook device, which originally priced from $499 / £399 for the 16GB version, has sold so badly the company had to write down almost $500 million in inventory costs.

But, that doesn't mean it's a bad tablet - just that the launch price was too high.

The first thing you'll notice about the PlayBook is its diminutive size. At 194 x 130mm (7.6 x 5.1 inches), it's on the small size - small enough to fit into your coat or jacket pocket - but the 1024x600 pixel capacitive screen is exceptionally clear and responsive, boasting four-finger multi-touch. 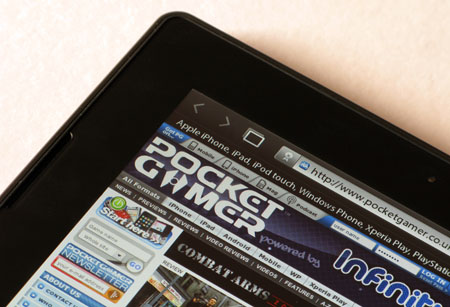 The Texas Instruments's 1GHz dual-core processor - including the PowerVR SGX540 as used in the Galaxy Tab and Nexus - powering the PlayBook ensures it's pretty speedy, with web browsing noticeably faster than other tablets.

And for a diminutive device, it's got a surprising heft to it. Not backbreaking by any means at 425g / 0.9lb, but combined with its 9.7mm- or 0.38-inch thickness, it gives it a sturdy bearing to complement its hard metal screen rim and tactile plastic-coated rear.

While this reviewer wasn't too keen on testing the limits too much (read: at all), it feels like the PlayBook could take plenty of punishment.

Its cameras can't be sniffed at either, with a 3-megapixel front facer for video calls and a 5-megapixel shooter at the rear, both of which can record 1080p video. The latter's quality is pretty good, with excellent automatic white balance and autofocus.

Completing the list of hardware features are the micro-HDMI output and mini-USB power slot (on the bottom edge) and the power button and a combined volume -/+ and play/pause button (on the top). Internally, there's also a six-axis gyroscope, magnetometer, and accelerometer. 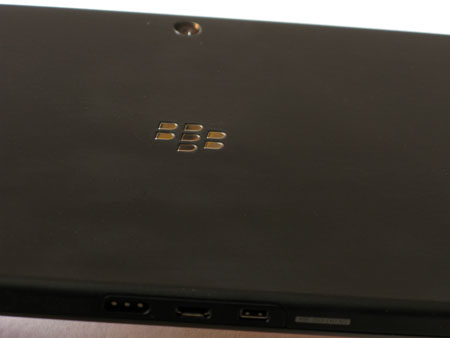 In terms of a well-integrated hardware package, the PlayBook ranks pretty high in the list of iPad wannabes.

Its real strength and weakness, however, lie in the operating system and user experience.

The first BlackBerry device to use what was called the QNX OS - now renamed as BlackBerry 10 - the PlayBook takes a different approach from iOS and Android.

One element that stands out is the touch-sensitive frame or bevel that surrounds the screen. You use this to gain access to new user interface elements, which makes the navigation of menus sleek and weirdly fun. 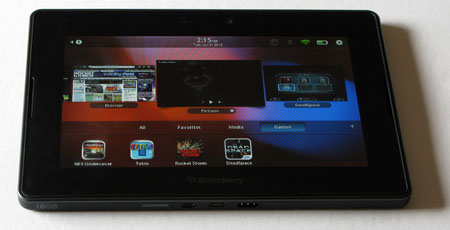 Indeed, if you go back to other tablets after any length of time with a PlayBook, you'll find yourself swiping from above the screen downwards wondering why the home menu hasn't been pulled down. Or why a swipe across your device from outside the frame through the carousel of live apps doesn't allow you to switch smoothly between them.

Yet, the big issue with BlackBerry 10 is that since it's a new operating system, few developers support it.

Of course, the BlackBerry App World store will enable you to download games and apps as they become available, but there's not a large range of content, even months after launch.

There's also Microsoft Office-compatible software, such as Word to Go and Slideshow to Go, which work well with the surprisingly responsive on-screen keyboard (it has great audio feedback, too).

It won't replace your netbook in terms of ease of typing, but it's much better than some of the virtual keyboards out there (we're looking at you, Apple).

Power BlackBerry users are still annoyed that the company's secure email and calendar features aren't supported as native apps, currently only available in conjunction with your BlackBerry smartphone via BlackBerry Bridge.

In this way, PlayBook is best viewed as a web device: certainly, the speed of its video streaming is exemplary, even with multiple streams going on at once.

In terms of performance, the biggest bugbear has to be the battery life. All the speed and swish on-screen genius does come at a price, as your PlayBook will drain pretty sharpish when in use.

For example, playing Need for Speed Undercover for an hour sees a charged battery down by a half. For gaming, you may find yourself hastily saving your in-game progress until the next plug socket presents itself. 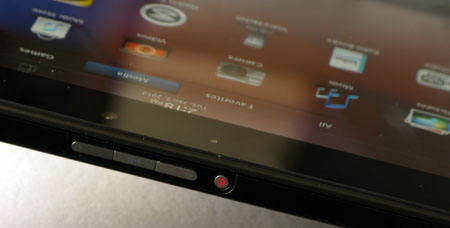 "Need for Speed, you say? What else is on offer?" Well to answer that: not much at all.

As well as the aforementioned racing sim, EA also provides a free version of Tetris.

Glance through BlackBerry App World and the number of high-profile games is limited to the likes of Dead Space and SimCityDeluxe, again from EA, N.O.V.A. 2 HD, Modern Combat 2, Asphalt 6 and Starfront: Collision from Gameloft, Angry Birds, and indie kid Machinarium.

Unity's porting software will underpin some more PlayBook games in future, though, including Samurai II and Battle Bears, with around 30 others planned.

It's nothing like as varied as Android or iOS, or even Windows Phone, and you'll pay a lot more for these games, too, with Angry Birds priced at $4.99 compared to 99c on other platforms, for example.

It's a shame, for a single playthrough of Dead Space drives home just how responsive the touchscreen is. That four-finger multi-touch comes into play immediately, meaning there are almost no moments of awkward touchscreen woes that you might experience elsewhere. 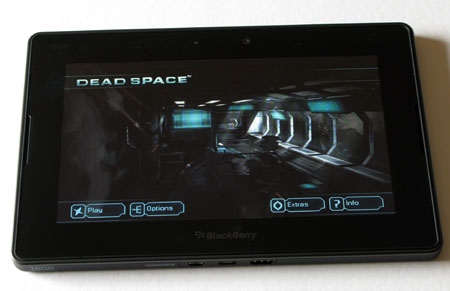 In conclusion, then, it's hard not to recommend the PlayBook as a tablet. It's fast, sleek, intuitive, and responsive. Speed of browsing and video streaming are great, and the ingenious touchscreen frame will change the way you think user interfaces should work.

Aside from a lack of menu customisation options and some battery niggles, there is little technically wrong with the PlayBook as a go-to net-browsing and video-watching device.

As a games device - or as an app device - the PlayBook currently falls well short due to the lack of content. It's a genuine shame, because the games that are available emphasise what a great tablet for gaming it could be if more developers supported it. 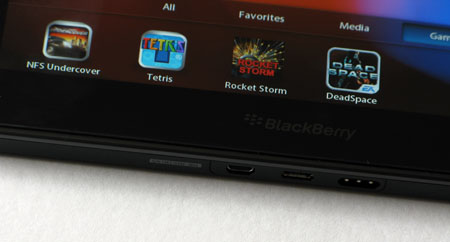 Of course, the other key reason is it hasn't sold very well at all is because it launched at too high a price.

RIM's recent decision to cut the price of all devices to $299 in North America during February, and from £169 for the 16GB in the UK is a step in the right direction. Perhaps, the growth of HTML5 as a web standard for games will also help it in terms of making more content available.

However, positioned somewhere between the market-leading iPad family and the cheap and cheerful $199 Kindle Fire (which incidentally is based on the PlayBook, although nothing like as full featured technically) - not to mention the serious corporate issues facing RIM - it's difficult to see how the BlackBerry PlayBook will find a long-term audience, despite its many strong points.

In terms of its hardware, the BlackBerry PlayBook is a very well designed tablet. The user experience is also very good, but it's let down by the lack of software
By Matt Sakuraoka-Gilman
| Jan 4, 2012 |
Blackberry