Every musician or actor has a project in his repertoire that goes sadly unappreciated. With David Bowie it’s the brilliant Buddha of Suburbia, while the Coen brothers’ Hudsucker Proxy remains a oft-overlooked celluloid gem.

For Sega’s Sonic The Hedgehog, it’s Sonic CD. Released in 1993 when the spiky blue mascot was just hitting his stride, it gained plenty of critical acclaim but sold poorly, thanks largely to the fact that it was exclusive to Sega’s commercially stillborn Mega CD system.

Although the game has seen ports for various formats over the years - including the PC and GameCube - it has always been one of those games that critics rave about but nobody actually plays. Until now, that is.

This enhanced mobile port not only incorporates the groundbreaking gameplay that made the Mega CD original such a blast, but also factors in various improvements and additions, the most obvious of which is a revised wide-screen aspect ratio that shows off more of the game’s lush 2D environments.

Like Sonic’s other 16-bit outings, Sonic CD is essentially a breakneck dash from the start of each level to the end. Each world is divided into three acts, the third of which sees you facing off against Dr Robotnik (or Dr Eggman, if you prefer to use his Japanese moniker) in one of his death-dealing contraptions.

Collecting rings not only allows you to boost your stock of lives (you get an additional one for every 100 you obtain), but it also offers your a degree of protection. As long as you have at least one ring, Sonic can take a hit without dying.

That rings a bell

Television monitors are dotted around each stage, and these award you bonus items, including a one-hit shield, super-speed boots, and temporary invincibility. Many of these TVs are off the beaten track, and this rewards exploration around the game’s impressively expansive levels.

And expansive they most certainly are. The original Sonic CD benefited greatly from the increased storage space offered by the compact disc medium, and the levels feel absolutely gigantic when compared to those in the first Sonic outing.

Despite the protagonist’s penchant of speed, the structure and pace of Sonic CD is deliberately slowed down to encourage players to search for secret sections and alternative routes. While it’s tempting to push Sonic in one direction until he reaches top speed, the layout of the levels actually impedes this approach.

Those of you who loved the speed of Sonic 1 and 2 may find this a bit disconcerting, but in fact it makes for a much deeper experience.

Instead of merely jamming the virtual D-pad in one direction in the hope that Sonic will coast to the goal unscathed, you’re forced to use your platforming skills to negotiate some cunningly designed obstacles.

Another massive change is the ability to travel through time. At various points in each level you’ll come across signs which read 'Past' and 'Future'. Flipping one of these and then running a top speed will cause Sonic to shift through time and space, which alters the look and feel of the level itself, as well as the kinds of enemies you face.

What’s more, if you find a robot generator in the past and destroy it, you can achieve a 'Good Future' in that particular stage. Doing this on all of the levels is easier said than done, and this offers a challenge that will keep you glued to your handset for many weeks to come.

The need for speed

The fact that we still have so much amazing content to cover is an indication of just how brilliant Sonic CD is.

No stone has been left unturned in this conversion: both the Japanese and American soundtracks are included (the former of which is vastly superior to the latter), the animated introduction sequence has been cleaned up from the grainy Mega CD original, and there’s even the option to unlock Sonic’s slightly irritating sidekick, Tails.

Even the game’s touchscreen controls are excellent, although this has much to do with the fact that only a single button is required to make Sonic jump and spin, so you don’t have to fret over where to tap your finger during tense moments.

A debate continues to rage in retro gaming circles about which Sonic game truly represents the character’s finest hour, and now that Sonic CD is finally available to the large audience it really deserves thousands more gamers will be able to form their own opinion on the subject. 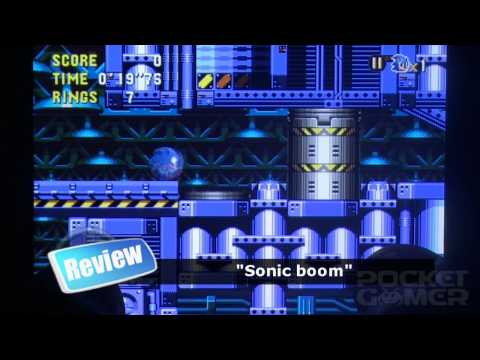 A faultless conversion of what is arguably Sonic’s most accomplished adventure, Sonic CD combines amazing presentation with a surprising degree of depth and playability. This peerless 2D platform escapade is a must for any self-respecting gamer
By Damien McFerran
| Dec 21, 2011 |
iOS + Android + Windows Phone
Find out more about Sonic CD

Sonic CD for iPhone, Android, and Windows Phone will include Tails as a playable character