Gone are the days when all you'd have is a choice between Sudoku or Tetris. On bada, there are plenty of different takes on traditional puzzley conventions available for you to to sample. 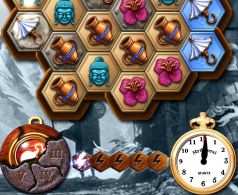 There's not a lot of logic to Azkend, and that's a good thing. There's never any explicit reasoning given as to why you're tasked with matching up lines of random items like shells, pots, and umbrellas.

Said matching will change the colour of the tiles on the game grid, and once all the tiles are blue, you'll be given the chance to catch a treasure and finish the level. Run out of time, though, and its back to square one. Or 'hexagon one', as it were.

Azkend also contains a few hidden object sections, but what'll keep you coming back is its tight, polished gameplay, and its vivid visual design. That, and an intuitive and unobtrusive control system. 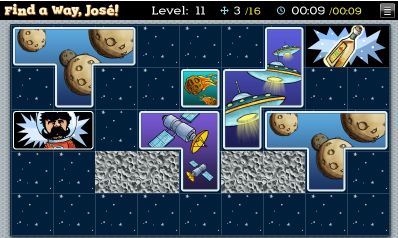 For those who like a bit of incentive in their puzzlers, Find a Way, Jose is thinking of you, since it pits a desperately hungover Mexican against sliding puzzles, all so that he may be reunited with his lost love (a bottle of tequila).

Aside from trivialising alcohol abuse, Find a Way, Jose packs 60 levels of tile-sliding action as you try to bring Jose closer to his liquid muse.

He'll laugh, sing, or break down into pathetic sobs of cold turkey misery depending on how well you do. And, no, his surname isn't 'Mourinho'. 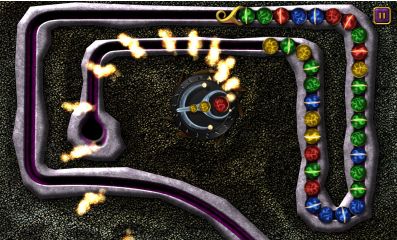 Finnish developer 10tons has forged an excellent reputation for producing highly polished puzzle games (see Joining Hands below for proof), and with Sparkle it doesn’t disappoint.

Sparkle is a port of a PC / Mac game, and the transition to a miniature touchscreen version hasn't diminished the quality one jot.

Like all the best puzzle games out there, the premise is simple to learn and ball-bustingly tricky to master. Match three balls of the same colour by tapping to fling, and they will disappear. If you take too long, the line of orbs will reach the end and it's Game Over. 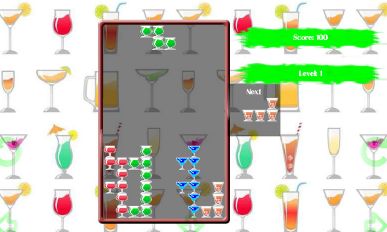 Russian Bar narrowly missed out on selection for the best bada pub games round-up, since the game's puzzley elements are what really grab your attention.

You'll have to match up the variously coloured drinks as they descend from above like an AA member's Tetris-infused hallucinations.

Matching up 12 drinks will cause them to explode and clear the way for more of the same. 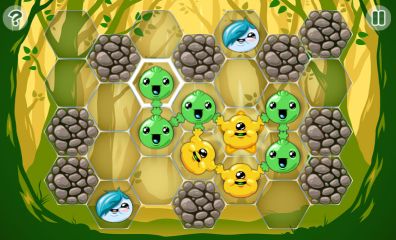 The Peablin heroes of Joining Hands may very well be the most adorable creatures conceived in any game ever.

That said, their propensity for getting all jumbled up when they should all be holding tightly to one another's hands creates a slight pickle (and forms the foundation for this grid-based game).

You're tasked with bringing those palms together by moving and rotating the Peablins around the grid to make sure they’re all in order.

Watch out for some idiosyncrasies among the Peablin population, though. For example, the 'Emo' Peablin, complete with obligatory floppy fringe, doesn't want to hold anyone's hand. Miserable little sod.