How US iTunes account holders can get Angry Birds, Cut the Rope, Fruit Ninja and Tiny Wings for free

Download some free apps and cash in with FreeMyApps

It used to be that companies could get you to download their iOS apps by giving you free stuff in the games you were already playing, only Apple banned all that sort of thing earlier in the year.

Problem was it worked so well that clever types have been working out a way to bring it back for iOS users outside of the App Store. (Of course, it's always been available for Android.)

One company getting back into the space recently was Tapjoy, which announced its consumer exchange program in early November.

Now, however, Fiksu - a US outfit that calls itself a user acquisition service - has launched something similar.

Currently only available for iPhone (obviously iPad too, if by default) and for people with US iTunes accounts, all you have to do is check out www.FreeMyApps.com on your iOS device using Safari.

You'll be asked to download a small piece of code so the site can check what you have installed, and then you get to download from a list of selected free apps from sponsors of the service. 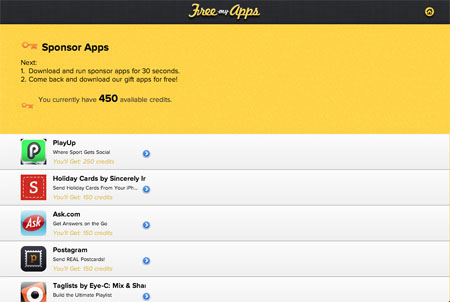 For each one you download, install and usefor 30 seconds - yes, they're counting - you're rewarded with credits. These can then be used to 'buy' paid games.

When we first checked out the service last week, there were 2,450 credits available to be downloaded via 12 apps. 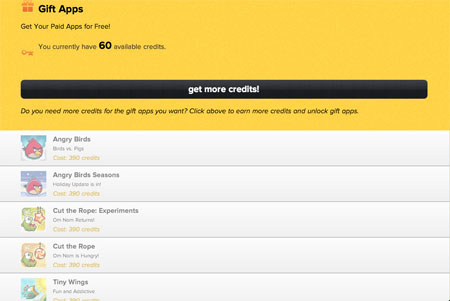 The check out system works using a gift code which is automatically inserted into your iTunes redeem box, but, at this time, it's limited to US iTunes accounts only.

It's expected the service will be rolled out to different countries, as well as Android during 2012. 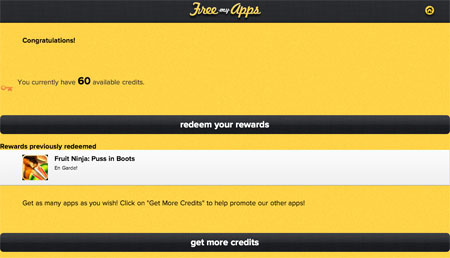 You can check it out via www.FreeMyApps.com, but remember although non-US users will gain credit for downloading apps, you can't 'buy' games unless you're logged into a US iTunes account.