In search of Windows Phone: Nokia's Lumia lighting up retail

If Microsoft had been looking for a glimpse into Windows Phone's first year on the shop shelves, a glance at Pocket Gamer back in October last year would have given the firm a rather heavy hint.

In the days before Windows Phone rolled out at retail, we took to the streets of Manchester to sample the platform's presence on the high street – or, as it turned out, lack of it.

Not only did the majority of shop workers in the UK's biggest mobile chains have no idea what the OS was - despite the first handsets being just days away - but even those who did seemed intent on getting us to buy an Android instead, complete with bizarre assurances that, Microsoft and Google's various misgivings aside, Xbox Live would "more than likely" come to the platform at some point in the future.

No-one, it seemed, could get excited about Microsoft's OS.

Fast-forward 13 months, and we decided on a repeat trip. With Nokia's first Windows Phone – the Lumia 800 – having hit the shelves on November 16th, it seemed right to check in with Microsoft's big hope in the run-up to Christmas.

Things couldn't have been more different.

Indeed, the one and only letdown on the high street this time around was O2. Last year, the operator was the only retailer that not only knew about Windows Phone, but was also fully clued up as to which handsets would be in store and for what price.

Nokia's Lumia 800 was strangely absent from Manchester's two O2 stores during our revisit, and closer inspection reveals it's not for sale on the company's website either. In fact, O2 appears to have cleared its decks of Windows Phone almost entirely, with only the now year-old HTC Mozart 7 on its books.

For now, at least, the company appears to have pulled support for Microsoft's platform, almost on the quiet.

It's an odd move given that the rest of its competitors are now mad for Nokia's latest handset.

Leading the line is Phones 4U. Not only are there huge, dedicated TV screens both in shop windows and in-store pushing Lumia, but also demo units prominently displayed and – most importantly of all – staff keen to sell the phone.

Indeed, in Manchester's main Phones 4U store – one of three we visited – I was positively leapt upon. The handset was "selling very well", I was told, with someone buying one in store at that very moment. 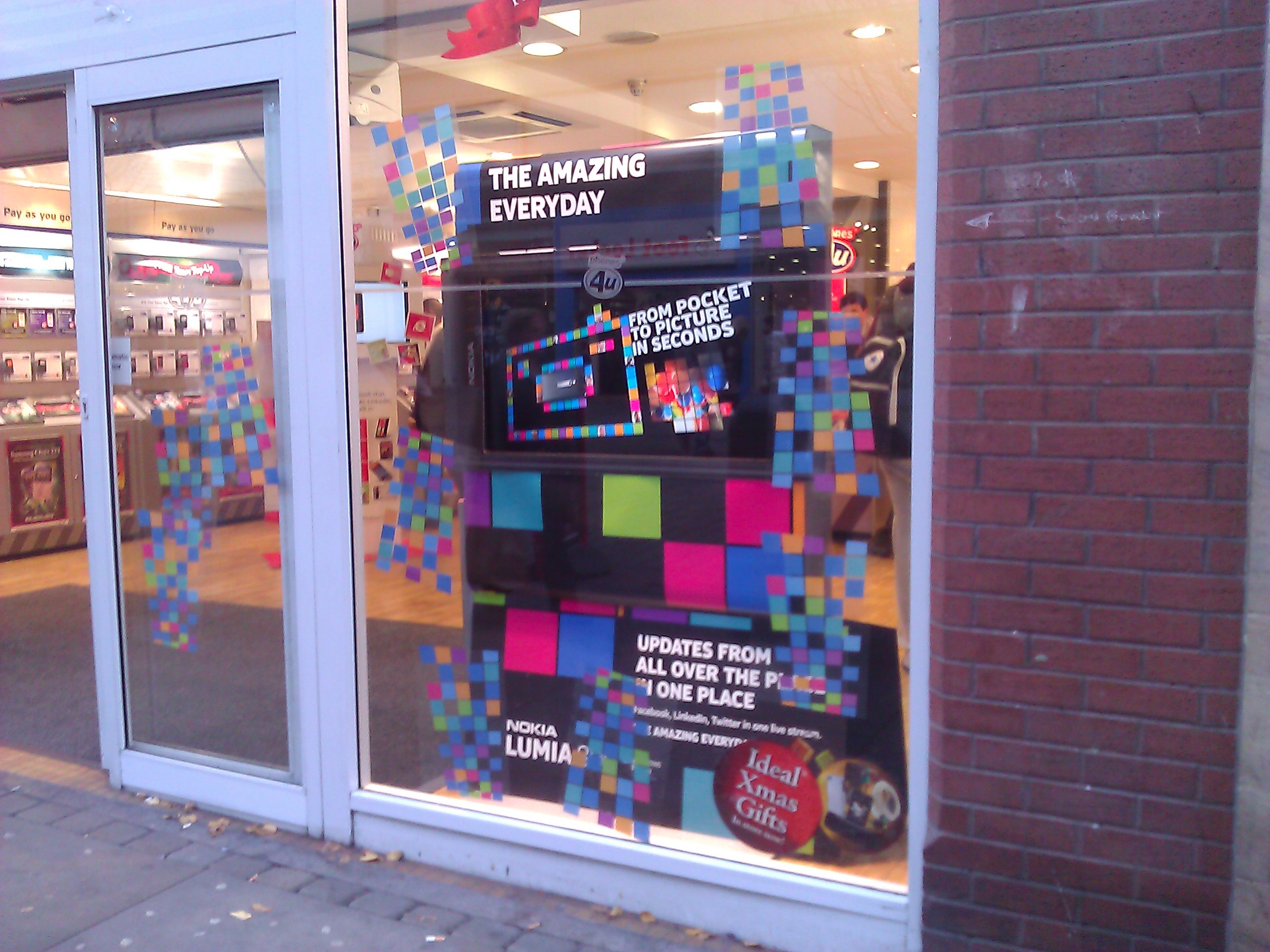 It was in this very branch a year ago that the first of many attendants attempted to drop an Android in our hands. Now, not only was the assistant fully clued up about all the platform's features, but he was also pushing it as the store's big new thing.

Yes, even ahead of iPhone 4S. Both in terms of Phones 4U and - as a close second, Orange - Nokia's new handset had more in-store promo behind it than Apple's latest – arguably a sign both of the effortless presence iPhone already has, but also the renewed faith Lumia 800 has given retail in Windows Phone.

As stated, Orange outlets – two visited during this trip – are pushing Lumia hard. Not only was it giving away Xbox 360s and displaying some rather large shop window posters, but staff were actually stood outside the store in branded Nokia t-shirts, reflecting the tab-based approach of the handset's ad campaigns. 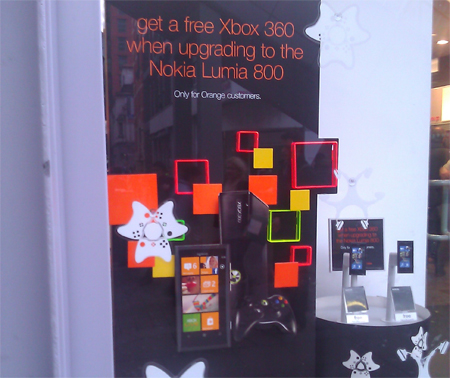 Again, Lumia was also afforded a dedicated promo spot in the store itself, and when I asked when the cyan model would be available – officially due to launch on November 28th – the shop attendant talked me through the ability to "fully customise" the colour of the phone's live tiles, despite not being entirely sure when other colours would launch, if at all.

In fact, that was the one weak point all the stores suffered from – all had black Lumia 800s in stock, but there was massive confusion as to when the cyan and pink versions would ship.

Many, like the second Phones 4U outlet, wrongly suggested the cyan edition was "for display models only", while Carphone Warehouse – which actually has both black and cyan listed as available on in-store marketing material – didn't think a launch was forthcoming.

T-Mobile's reply was probably the most inventive. "If we were going to sell it, it would have been here from day one," I was told, before the shop attendant added, "besides, it's company policy for T-Mobile only to sell phones that are black. Or pink."

The assistant in Three's main outlet went to the trouble of checking on the firm's computers for a cyan release – to no avail – while Vodafone, which had the least in-store promo of any of the major stores, was equally clueless. 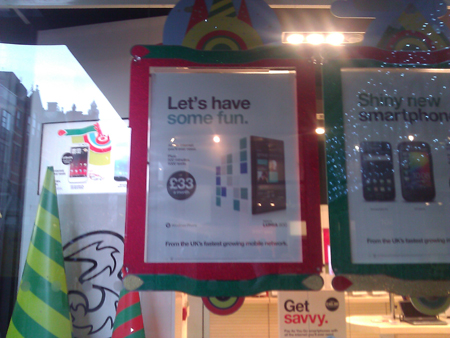 Even here, however, it's pleasing to report that the news is mainly positive.

The top feature in Vodafone's bi-monthly magazine is focused on Lumia 800, and every single attendant I spoke to – barring O2 – not knew exactly what the phone was (even when I simply referred to it as "the Nokia". Some led me towards it before I even said anything. 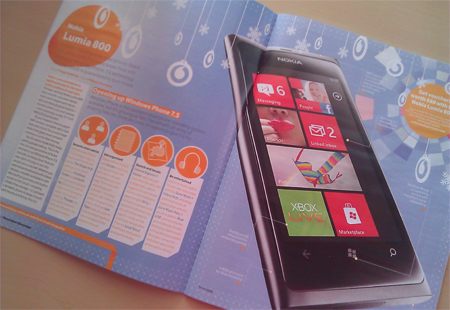 I was also party to one customer being diverted away from the N8 towards the Lumia 800 in Manchester's main Carphone Warehouse in the Arndale Centre.

The girl in question, I overheard, wanted the N8 for its 12MP camera, but was happy to pick up the Lumia instead – despite it only boasting a 8MP camera – because, after playing around with the display unit, she "just really, really liked it".

It all suggests Lumia 800 is doing rather better at the tills than its Windows Phone predecessors managed a year ago at launch.

Indeed, we've even heard word from a source working at a large Vodafone outlet in one of the UK's major cities that, to date, Nokia's latest is currently outselling both Samsung's Galaxy S II and the HTC Sensation. 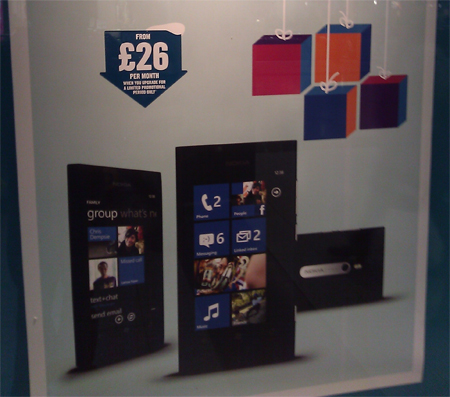 Perhaps the most interesting aspect of Lumia 800's launch will be the impact it has on Windows Phone devices from Nokia's rivals.

A couple of shops – one Phones 4U outlet in particular – even seemed to be pushing the ridiculously massive 4.7-inch HTC Titan as the Lumia 800's 'bigger brother', as it were, placing demo units next to each other.

But it's the Nokia name, rather than Windows Phone, that shops are selling Lumia 800 on.

That's the word on all the shop assistants' lips, and almost all of the in-store branding talks of 'Nokia' and 'Lumia' rather than 'Windows Phone'. The Finnish firm might have taken a risk backing Microsoft's platform, but a quick sample of the high street action proves Nokia is still a major force to be reckoned with on UK shop shelves.

Take a peek at The Dark Knight Rises Nokia Lumia 800