The second coming or a very naughty boy?

There's never been any doubt in my mind that Nokia makes the best mobile hardware.

In the face of iOS, Android, and then Windows Phone, Symbian just wasn't up to it, which is why Nokia's finally handed all its future Symbian development over to Accenture, and adopted Windows Phone for its smartphones.

The best of both worlds, it doesn't have to worry about OSs, services and apps, and can focus on what it does best - making great mobile hardware.

Which brings us to the Lumia 800 (previously codenamed SeaRay).

Physically, it's a Windows Phone version of Nokia's beautiful N9 hardware, minus the MeeGo OS and plus a new side mounted camera shutter button, and the usual three Windows Phone buttons.

This means it comes in the same single piece injection-molded plastic shell - no access to internals or battery here - which is very subtly pinched at each end; echoing the shape of the N8 perhaps. 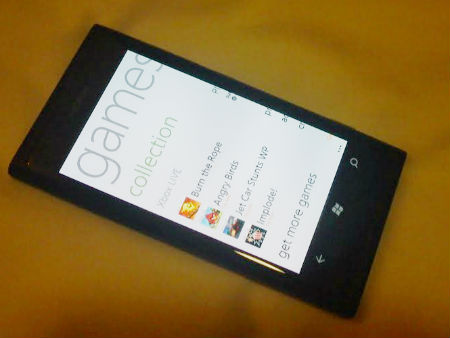 The matt finish is excellent, providing a surface that's warmer to the touch than a metal case but much more sophisticated than the case of the Sony Ericsson Xperia Play I'm currently running. It also marks less than metal cases.

Size-wise, the Lumia 800 is much the same plan dimensions as the Xperia Play, with a 3.7-inch 'ClearBlack' AMOLED 480x800 pixel touchscreen, although, of course, it's much, much thinner. 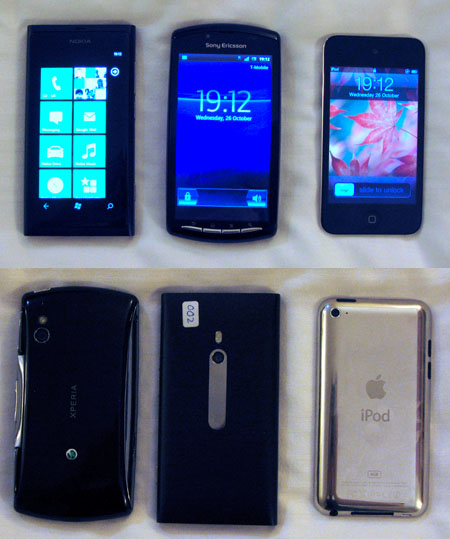 Indeed, it's surprisingly similar to a fourth generation iPod touch (my only other comparison point at present), being somewhat thicker and around a centimeter longer.

Other details. There are three physical silver metal buttons on the righthand side: a volume rocker at the top; the power/wake up button beneath; and the camera shutter button towards the base.

In the pre-release version of the phone I'm demoing for a couple of days, the camera button is a little loose, which means the phone rattles when you shake it, but I assume that's an initial production issue. Certainly, it makes the phone sound cheap, and I can’t believe Nokia would accept it for production models. 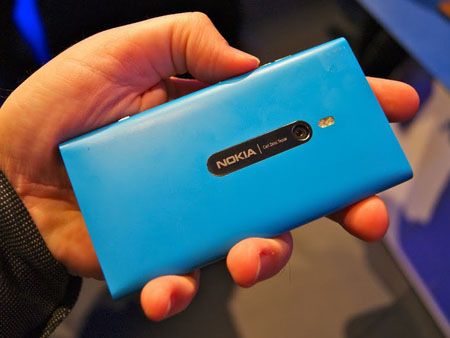 As for the back, the 8MP Carl Zeiss lens camera with the two unit flash are mounted flush to the plastic surface, with the lens mounted in a metal encasement. Interestingly, they are both located on the middle of the device, so you're unlikely to get your fingers in the way, as with the iPhone .

The only other breaks in the Lumia 800's smoothness are at the case's top and bottom. The bottom has been drilled with tiny holes to create an audio break, while the top has a headphone jack socket, a press down and release cover for the mini-USB power socket, and a neatly designed slide-out mini-SIM frame, which is delight to use, if likely to be lost if you're not careful.

Cleverly, though, it's locked in place by its own mechanism plus the USB cover, which needs to be opened in order to gain access to the SIM.

The bottom line is that, physically, the Lumia 800 is an impressively beautiful thing to hold. 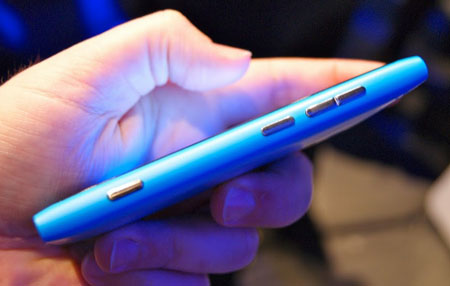 Indeed, such is the attention to detail and resources that Nokia has lavished on the design that the screen even has some sort of special nano resistant coating - it was explained at Nokia World - that means you smear it less with your fingers' grease when you touch it.

It's not all about the looks, however.

While I don't have time to get too deeply into the Lumia 800's operation as a gaming device, or even a mobile device, it appears to be no slouch.

Like all Windows Phones, it runs a Qualcomm Snapdragon chip, clocked at 1.4GHz and using the same Adreno 205 GPU that's in the Xperia Play. This is pretty much as good as a smartphone gets at the moment, aside from the likes of the custom chip solutions such as those found in the Galaxy S II or iPhone 4S.

OS-wise, it runs Windows Phone 7.5 (Mango) of course, which is the first version of the OS to enable games to run at 60fps, as Fruit Ninja developer Halfbrick informed me today. The original Windows Phone 7 locked the refresh rate to 30fps for some reason. 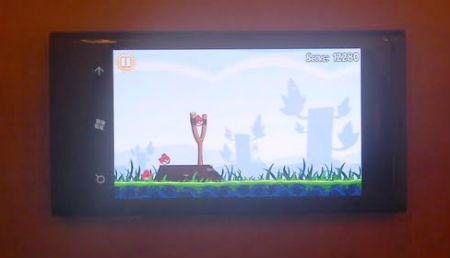 When combined together, in the general tasks I've been trying out, Lumia 800 is extremely quick, offering a very smooth UI when performing the usual scrolling and swiping, while games - I tried Burn the Rope, Jet Car Stunts WP and Angry Birds - worked just as you'd expect them to.

Indeed, the only thing that's missing is an NFC chip, which seems to be because it's not supported in Windows Phone yet as Nokia is pushing it madly in its Symbian devices.

I was also less than convinced by the camera, although I know you need to play around it in different light conditions and using different settings to get a good idea of how well it works. However, it seems not as good as the Nokia N8, or iPhone 4 or even Xperia Play.

But those and the loose shutter button aside, it seems that with the Windows Phone-powered Lumia 800, Nokia is well on its way back to the top of the best mobile hardware - and more importantly the best smartphone hardware - charts.

Certainly, I'll be looking to make it my first Windows Phone when it's released in six key European countries in November.

Take a peek at The Dark Knight Rises Nokia Lumia 800