Hands-on with the Motorola RAZR

We've already written about the return of the iconic RAZR, and we've now been able to get some hands-on time with Motorola's brand new smartphone and its accessories.

The Motorola RAZR is impressive enough in itself, thanks to its slimline (7.1mm) design and a bright 4.3-inch AMOLED display, but it's also pretty tough. With a Gorilla Glass front screen, Kevlar fibre rear cover, and 'splash guard' coating to protect the internal components from the rain or spilt water, it's a smartphone built to last. 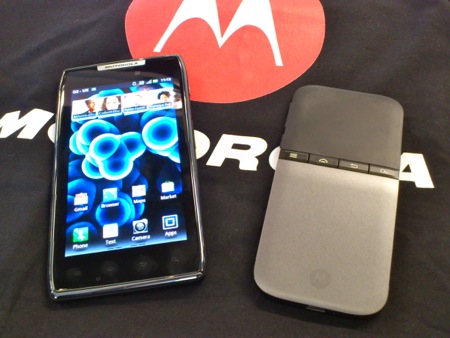 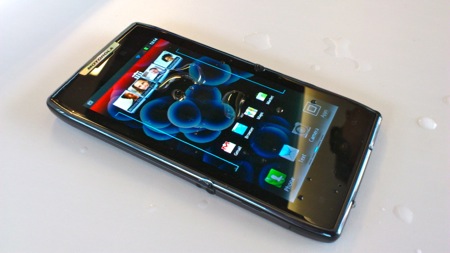 Although it's not shipping with the latest Android OS (Ice Cream Sandwich, or V4), an update is promised for the first half of 2012. In the meantime, there are plenty of accessories to accompany and RAZR when it goes on sale at the start of November.

It's all about the extras

Just like the Motorola ATRIX, the RAZR has a number of enhancements that come into play when you connect the phone to an HD television or one of the laptop docks.

There's a Webtop mode, which gives you a full Firebox browser and widgets. There's a multimedia player that lets you enjoy music, film, and photos. There are keyboards, mice, and a cool 'Smart Controller'. Motorola has everything covered. 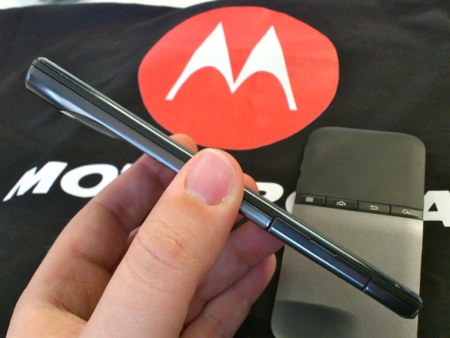 The RAZR is powered by a 1.2GHz dual-core processor with 1GB of RAM and a large AMOLED screen displaying 960x540 pixels. The only disappointment is the use of a PenTile matrix, which means missing out on pixels compared to a traditional screen.

It's the same as the ATRIX, but you can only really notice when you look at the screen very close-up - something that isn't really required given the high-resolution.

On the back of the phone is an 8-megapixel camera with f/2.4 aperture lens, capable of recording video at full 1080p. For enhanced audio, the phone comes with not one, not two, but three microphones. One is used for ordinary voice calls, while the others work to capture stereo sound and helping reduce background noise when you're on the phone. 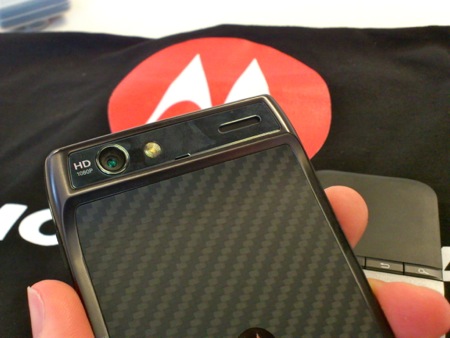 Despite the slim design, the Motorola RAZR also includes a 1,780mAh battery. However, a bigger battery isn't the only thing Motorola saw fit to include to improve battery life. Why not reduce power consumption at the same time? To do this, Motorola has developed a new app called 'Smart Actions', which can help squeeze every last bit of power from the battery, although the app can also do a whole lot more.

Smart Actions doesn't merely work like a third-party power-saving app, turning off GPS, wi-fi, and lowering the brightness to save power. It also lets you set events using a huge range of parameters, from what time of day it is and where you are (determined via GPS or a wi-fi network you're connected to) to what accessories are connected, including headphones or a charger. 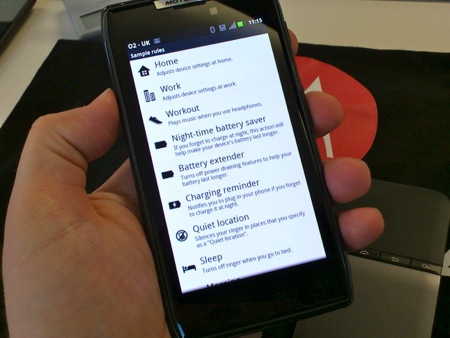 Thanks to this pick-and-mix approach, the options are virtually limitless and incredibly easy to control by sliding features left and right to enable or disable them.

One example might be what happens when you connect a pair of headphones. If it's the afternoon, when you usually go to the gym, it can fire up the music player. In the morning, it can load an audio reader app. You can set GPS to auto-disable while you're at home, and wi-fi to switch off when you leave for work and back on again when you arrive.

Perhaps the most useful feature is being able to set actions to run only for certain periods, so if you put the phone in Flight Mode overnight to save power you won't be wondering by mid-afternoon why you haven't had any calls.

Another new application created by Motorola, following the acquisition of ZumoCast, is the somewhat unimaginatively named 'MotoCast'. By simply installing a small host application on any PC or Mac you can share the content of selected folders over the internet and access them using your RAZR. 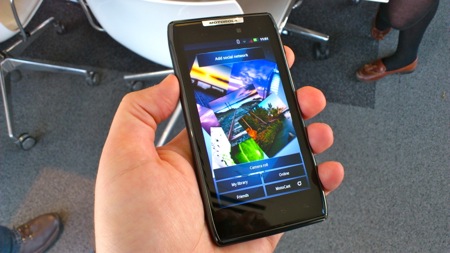 For anyone with a home computer connected to the net 24/7 it's a totally free alternative to the range of cloud-based services now on offer. MotoCast works with music, video, and pictures, and also supports all of the main audio and video codecs. Motorola will roll out MotoCast on future handsets, but seems unprepared to introduce it for existing models.

Anyone for some Ice Cream Sandwich?

The RAZR ships with Android 2.3.5 on it, but there are a few features of Ice Cream Sandwich in the RAZR already, given how Motorola already contributes quite a lot to the Android platform. 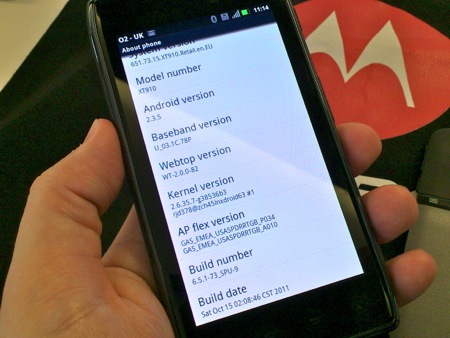 The new homescreen, for example, already has the newer grid system first seen on Android 3 (Honeycomb), as well as improved scalable widgets. We'll have to wait until we get the final review samples to discover what else is new on the phone, but this should compensate slightly for what could be a fairly long wait for the Android 4 update.

The Webtop software has been updated to include a newer version of Firefox and widget support. Each new LapDock also has improved power management options, so you can control which battery gets charged first when connected to the mains. 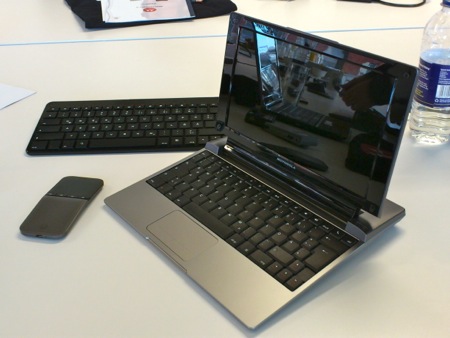 Motorola is yet to announce prices for the accessories, but the LapDock 100 is designed to be cheaper than the original model designed for the ATRIX. The LapDock 500 (not pictured) introduces newer features, and a larger screen.

Each LapDock will work with the RAZR and future models, but not the original ATRIX.

And finally... the Smart Controller gets a mention. Again.

Once again, we have to finish by mentioning the wonderful Smart Controller accessory. The good news is that we were told today that this cool accessory will work with any smartphone or tablet that supports the Bluetooth HID profile. Now we know exactly what to put on our letters to Santa. 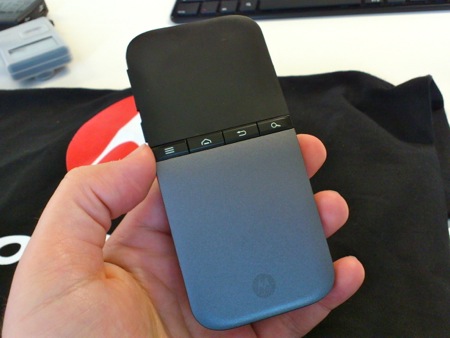 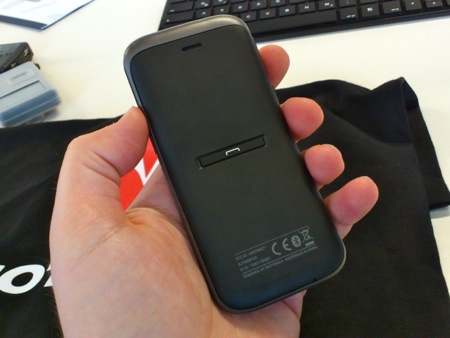 Besides this accessory, the other options are as follows: 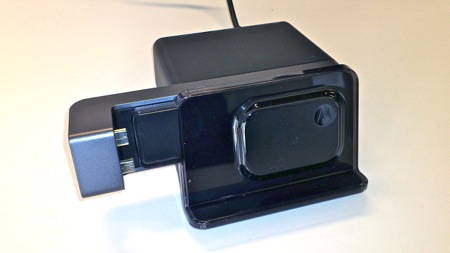