Well you're in luck, because Rovio Mobile has bundled the iconic images of numerous yearly hols - from Halloween to the Chinese Mooncake Festival - into a bonus batch of Angry Birds levels.

But, shockingly enough, the Earth has revolved around the Sun and we're right back to where we started: in the run-up to yet another Halloween. But instead of plumping for less mainstream October events (like JesusWeen), Rovio's decided to take a second swing at the concept.

So when you load up the app you'll now have the option of playing last year's levels, or "Seasons 2012", where new, seasonal levels will appear. That's exactly where you'll find Ham'o'Ween, 30 new levels, a fresh golden egg and lots of spooky skeletons.

Developer Rovio and some ardent Angry Birds Seasons fanatics have posted videos of every level, showing off the best strategies to beat the stages, grab the golden eggs and score three stars.

If you're stuck on a particularly tough stage, just watch the pros in action at the links below.

There's only one golden egg to find in Ham'o'Ween. It's not particularly well hidden, but it is tricky to grab. Finding it will net you a fun bonus stage to play, so read on and find out how to unlock it, pronto. 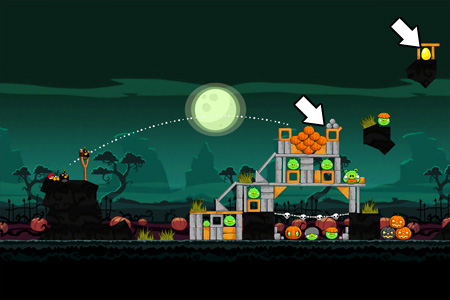 Golden Egg 1 (Level 2-2)
Okay, here's the deal. The egg is hiding in a little shed high above the action (pinch and zoom to see it), but you don't have any birds that are able to fly up and grab it. Bummer.

But there is a handy pile of rocks on top of the fortress, to the right of a big bucket of pumpkins. Lodge a black bird into the pumpkin pile, detonate his internal bomb and hopefully - if you're lucky - the little rocks will fling up and hit the egg.

It will, more likely than not, take a number of goes to get this right. It's more luck than skill, but keep at and the egg will be yours eventually. 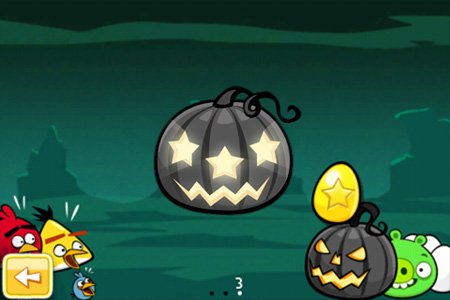 Golden Egg 2
To get this egg you'll need to earn three stars on all stages in the Ham'o'ween theme for Angry Birds Seasons. Good luck!

Spider Jack out now on Android, Contre Jour and Roll in the Hole out soon