By Chris Schilling
| Oct 24, 2011
iOS
|
Bike Baron
Get Bike Baron on...
Find out more about Bike Baron
Available on: iOS

When a game 'borrows' elements from two different titles, does it still count as a clone? Either way, Bike Baron is three parts Trials HD to one part Joe Danger, and it barely has an original bone in its body.

That it owes so much to those games leaves a slightly sour taste in the mouth, but taken purely on its own merits Bike Baron is an undeniably enjoyable way to waste a weekend.

While many clones pale in comparison with their inspirations, developer Mountain Sheep gets the crucial stuff mostly right: restarts are instantaneous, controls are solid, and the physics are almost perfect. Duke of hazards

As with Trials HD, Bike Baron is a side-scrolling ride through a series of increasingly testing obstacle courses over four different difficulty levels.

Each stage is a collection of ramps, bumps, and loops with explosive barrels scattered throughout. Hit a barrel or strike any other object or surface at the wrong angle and the titular racer will catapult from his ride.

In truth, collisions are wildly exaggerated, with the slightest brush against scenery at low speed enough to see your ragdoll rider cartwheel violently as his bike blows up. Barrier to progress

It’s also inconsistent at times – one level starts with a low barrier that you’ll sometimes be able to accelerate through and sometimes instantly crash into.

These moments of frustration aside, Bike Baron nails what makes Trials HD so addictive. Admittedly, those who found that game too tough will find plenty to swear at here.

But the instant restarts sooth the pain of repeat defeat, and there’s a strong sense of progression – you always seem to get that bit further each time, with tracks gradually becoming lodged into your muscle memory. Button masters

Mountain Sheep can’t quite recapture the brilliance of button and stick controls, but it has a bloody good go. Compare the touch-based controls to this week’s Flip Riders and the difference is night and day.

Each level has a checkpoint or three, meaning you're likely to get to the end with perseverance.

That said, to earn the three stars available on each stage you’ll often need to do so without crashing. Other objectives ask you to collect all the coins along the course. Or complete a certain number of flips en route to the 'finish' line – probably the most fun of all the challenges. Coin dropped

Such tasks are fine on Easy difficulty, but they become tricky even on Medium. By the time you reach Hard, some of the coins are placed in near-impossible places.

These tweaks to the formula are a double-edged sword. In Trials HD replay value came from trying to refine your times. Here you often need to take less-than-optimal routes to nab all coins or perform enough flips.

It’s a good idea in one sense, but some challenges are so exacting that it can be irritating to finish a stage with an incredible time and still fall short of three-star glory. Star power

That said, it’s possible to use stars gained from early stages to unlock the rest. It’s a neat touch that means most players will be able to see the final stages without being forced to jump through hoops (literally) to get there.

With solid presentation and slick, smooth graphics, Bike Baron is one of the best clones we’ve ever played, proving horribly addictive despite – or perhaps because of - its high difficulty level. 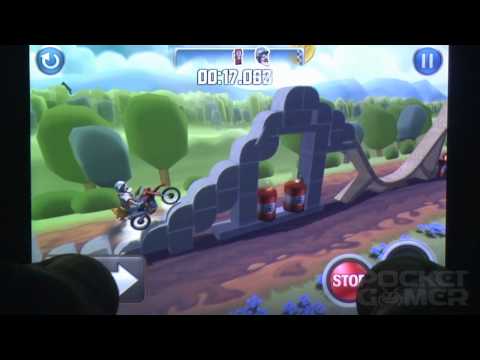 It owes much to Trials HD, but Bike Baron is one of the most addictive iOS games around
By Chris Schilling
| Oct 24, 2011 |
iOS
Find out more about Bike Baron

iOS stunt racer Bike Baron to be updated with new levels, objects, and 'much more'