By Steve McCaskill
| Sep 20, 2011
iOS
|
Wildlings
Get Wildlings on...
Find out more about Wildlings
Available on: iOS

Tower defence games are a dime a dozen on the iPhone. While most concern themselves with battling dragons, besieging castles, or slaying zombies, Wildlings is a battle to save baby animals from dangerous predators.

Evil creatures have descended on an island in search of your babies, and it's your duty to fend them off and facilitate the Wildlings’ escape.

The plot may sound sinister, but Wildlings’s colourful cartoon visuals and effective one-touch controls are the basis for a more active, simplistic take on the genre. However, this accessibility comes at the expense of strategy, which may leave seasoned veterans wanting more.

The campaign features over 45 levels spread across an archipelago of islands, each of which has its own environment, Wildling species, and enemy creatures.

You take control of the adult Wildlings tasked with defending the nest from waves of oncoming predators. You only need to save one baby to complete the level, but if you want all three stars you'll need to them all alive and prevent the nest from being touched.

Predators have different Strength and Speed attributes, meaning that you will often have to decide which poses the greater threat. If an enemy reaches the nest it'll swipe a baby, which you can retrieve by killing the enemy before it exits the screen.

You can specify a target by tapping the screen, or by holding and drawing a line from a Wildling to an enemy. This is simple when you only have to control one Wildling, but becomes more difficult when you have several characters as Wildlings will automatically go to the nearest target.

New and more powerful enemies begin to appear as you plough through each island’s levels, but you're given stronger Wildlings to cope with them. Further improving your offensive capabilities are power-ups, which let you stun and kill opponents, making enemy waves more manageable.

These power-ups require the use of a certain number of Sun points, which are won through normal play. These are collected by tapping them, and any unused points at the end of a stage go towards a fund needed to unlock the bonus island.

On paper, Wildlings’s premise sounds rather menacing, but this is juxtaposed by simple but captivating one-touch gameplay and cartoon visuals. Environments such as forests and volcanos are vibrant and colourful, while enemies’ cutesy appearance belies the threat they pose

Levels are far from difficult to complete, but varied enemies and the challenge of achieving all three stars creates a compulsion to repeat levels.

This is fortunate, as the campaign is on the short side, consisting of just three islands and a bonus island. This problem is magnified by the fact that each island’s difficulty curve is self-contained as it introduces you to its unique enemies and power-ups.

Levels that are already brief and lenient to begin with become even easier with power-ups. The only deterrent is that they cost Sun points, which you need to unlock the final island, but when this can be done with an in-app purchase there appears to be no downside to using them except a financial penalty.

Wildlings’s aesthetics and simplicity are its greatest assets in a crowded market, ensuring that it's an enjoyable take on the tower defence genre despite its relative brevity and lack of depth. 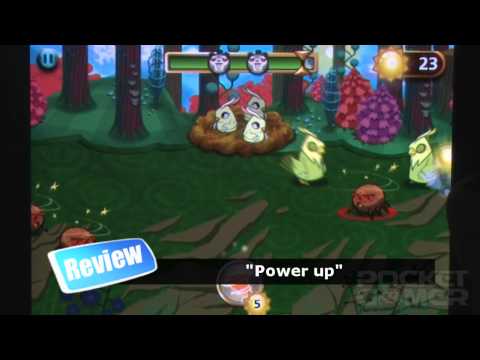 Wildlings is perfect for those who want a more active tower defence game without having to worry about too many variables, but others will find its lack of options frustrating
By Steve McCaskill
| Sep 20, 2011 |
iOS
Find out more about Wildlings