Some games make you think carefully about what you're going to do before you do it. You plan your strategy then execute your manoeuvres.

Other games rely on the speed of your reactions, forcing you into split-second decisions.

Between logic and action, it seems there lies a world of cubes, platforming, and terrible, infinite nothingness.

The game itself has a simple enough premise. You have to manoeuvre a cube through an isometric, angular landscape. You can roll the cube up walls one cube high, but other than that you're stuck on the ground.

The levels float in space, and one wrong move will send you plummeting to your cubey doom. In fact, for your first few runs, rolling into the endless oblivion of the galaxy will be a pretty regular occurrence.

There are gems scattered around the levels, and collecting these will speed up your cube's movement, as well as getting you better scores. Buttons you roll will change the level, and some blocks move of their own accord, pushing the unwary over the edge.

To start with, you'll try to take things steady, avoid risks, and make sure you get safely to the multicoloured flashing square that will warp you out of this level and onto the next. Then you'll get your score. It will probably be a D. Young people will laugh at your ineptitude.

You see, Edge Extended isn't just about getting to the end of the level, it's about getting there as quickly as you possibly can. Each of your tries is rated on a scale from D to S+.

So whilst there are only 44 levels to play your way through, you're going to have to try each of them more than once to get the best ratings.

The gameplay is slick and addictive, with a choice of control methods to suit your play style, but the real strength of Edge Extended lies in its superlative design. Levels are ingenious, twisted, and fiendish creations that will test the quickness of your fingers and your brain cells.

The icing on Edge Extended's cake is its presentation. It's a crisp, stylised title, with stark lines and a retro-futuristic look that's immediately recognisable. The music too, is a joy, and sets off the on-screen action perfectly.

Edge Extended manages to be every bit as enjoyable as its predecessor. Whilst it's not so revolutionary the second time around, the extra content on offer here, and the extra layer of polish that's been lovingly applied, make for a game that looks and plays better than most things on the App Store.

Mobigame has managed, once again, to fuse together an enjoyable puzzle game and a perfectly paced platformer. Add to that pitch-perfect execution and a wonderful art style and it's hard to stop pouring praise onto Edge Extended. 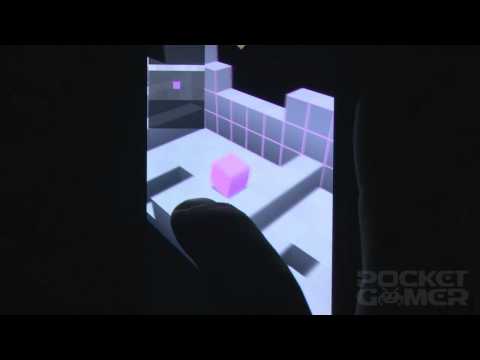 A brilliant second outing in the Edge series, brimming with good ideas, and polished to a remarkable sheen
By Harry Slater
| Aug 29, 2011 |
iOS + Android
Find out more about Edge Extended