Gamescom '11: Hands-off with OnLive on iPad

OnLive can’t possibly work. The system, based on streaming everything to a machine with the OnLive client installed, is sheer madness.

If I can’t even run a multiplayer race in Real Racing 2 on my 10Mbps cable line without at least one car stuttering, how on earth could a PC game stream successfully to an iPad?

Yet, it’s hard to come away from a demo of the service in action without being at least slightly impressed - nay, very impressed.

Indeed, the service may well usher in a new age of mobile / console / PC crossover not yet experienced in the gaming world. If it can produce the goods outside the showrooms, that is.

But I’ve leaped ahead of myself. OnLive, for those not in the know, is a service that uses your host machine merely as a display and input device, while the games themselves are streamed from (what is presumably) a huge server farm located at various points around the world.

To look at it another way, it effectively allows you to play games like Just Cause 2 and Split/Second on a tablet at speeds and detail levels far exceeding your device’s graphical capabilities.

Indeed, those two particular games were demonstrated to us running flawlessly on an iPad 2 at Gamescom (see below), with controls handled via OnLive’s own joypad, which slightly resembles the design of the original Xbox ‘fat’ controllers.

Given the relatively taxing amount of information that needs to be sent back and forth between tablet and server, it was surprising to learn that OnLive is estimated to require just a 1Mbps connection to handle such streaming.

This is in sharp contrast to the more demanding 4Mbps required for HDTV activities, although OnLive's needs are still too great for anything less than a 4G / wi-fi connection when on the move.

What’s even more impressive, however, is all the extra features OnLive packs into that stream: not only does it include a simple friends list and store, but it also contains a series of features that could only really be possible through a streaming service.

Features such as the Brag channel, which allows you to see thousands of clips of players doing ‘something cool’ in the various games.

Brag Clips can be recorded at any point during a game by hitting a button. This automatically captures the previous 10 seconds of footage, so there’s no need to line up and desperately try to recreate an hilarious / awesome moment of skill as with normal recordings.

Another neat element of OnLive is the ability to leap into other people’s games and watch them play live - something users of the OnLive Viewer app will have already seen in action.

You can then join in on voice chats (if you like) or rate them as they play, although the more shy among you can always disable others leaping into your game if you wish to.

OnLive isn’t a madman’s dream - it does work. It’s also slowly gathering up support from publishers, with both Dues Ex: Human Revolution and Batman: Arkham City launching on the service alongside their retail release.

Whether it’ll work consistently and smoothly enough to truly turn your tablet or (later) smartphone into a games console is another matter entirely, but we’ll no doubt find out when the service launches on September 22nd in the UK, and in Europe a little later.

And as promised, here's a video of Split/Second running on an iPad via the OnLive service. 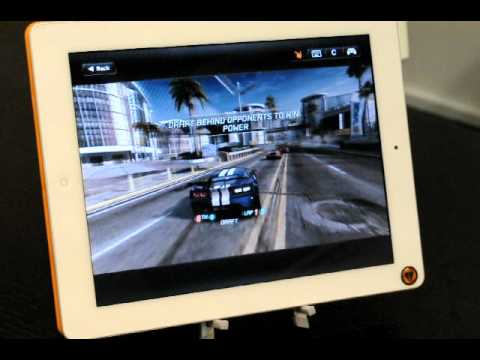