Exclusive: The making of... an Angry Birds level

On the iPhone, there are now over 600 stages for smash-hit, fowl-flinging puzzler Angry Birds.

That means between the game's inauspicious launch in December 2009 and the latest content pack in July, the series has been updated on average with one new level per day since going on sale.

That seems like a Herculean undertaking. So, how exactly does Finnish game developer Rovio make every level? What's the design process that's led to this bumper collection of levels for Angry Birds addicts to play through?

Pocket Gamer spoke to Angry Birds level designer Arttu Mäki to find out the six-step (and ultra-secret) process to making a new stage for the multi-million selling game.

The angry birds have long migrated away from the grassy knoll of the app's opening stages. In the year and a bit since they hit the scene, Rovio's clan of disgruntled birds has gone underground, explored the jungle, taken to the skies, hit the beach, and landed on the moon.

"When making a new level, new ideas are often inspired by the theme and setting for the episode," Mäki says. "We're always looking for new ways to bring the theme to life with levels that actually represent something."

Sometimes, it's even topical.

On July 8th, to commemorate the last ever blast off of the space shuttle, the aggravated avians enjoyed a special level in space, with the pigs commandeering a lunar lander. Made of wood and stone. And a banana.

Some of the game's first birds. Subsequent updates, and the release of Rio, introduced Blue, Jewel, the chunky Big Brother Bird, and the Mighty Eagle.

Surprisingly enough, Rovio chooses its birds before its buildings. After coming up with a suitable theme, the studio starts the process by deciding upon a handful of birds from its bouncy, speedy, scattering, explosive, egg-dropping, boomerang cast.

"It's important to keep the game fresh with bird selections," Mäki says. "When designing a new update, we want to introduce the whole flock of birds, so that everyone gets to see their favourite one."

"Otherwise we might end up with every level packed full of our favourite, the White Bird."

Pocket Gamer, on the other hand, doesn't have an outright favourite -an informal poll of the editorial staff initially resulted in the Black Bird getting the nod, but the discussion soon descended into bickering and name calling.

Now is the opportunity to flex those creative muscles and turn a few blocks of wood, stone, and glass into an architectural wonder to house the game's emerald green piggy wigs.

Choosing the block types used and their location is largely determined by the birds chosen for that stage. "You don't want to end up with a rock level with a selection of Red Birds," Mäki explains.

Stages aren't designed by committee. While artists and programmers will contribute to the 'bigger picture' with visuals and new gameplay ideas, "Level design in this case is always done by one individual."

Step 4 - Decide on the star ratings 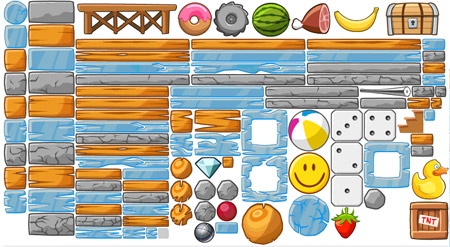 An incomplete toolkit for making an Angry Birds level. At least the all-important duck is there.

"We spend more time developing and tweaking the ratings than building the level. It's a very important part of the development process," Mäki tells us. "Deciding on the ratings is the final part of level building and is actually the most taxing process."

In Angry Birds, netting the prestigious three-star award (and all the bonus levels, Game Center achievements, and fawning women that follow) is dependent on earning a high score, causing untold destruction, and saving the odd bird from kamikaze suicide.

"These star ratings are the results of extensive playtesting by the designers," Mäki says. "It's usually an average from a score that can be achieved with a certain skill shot or method. It's a challenging process to nail down which specific score should earn you all three stars."

Then, a YouTube video emerges of an Angry Birds savant earning a multi-million point score by slyly launching a single Yellow Bird into a tiny crevice, like Luke Skywalker at the end of Star Wars.

"We're always surprised by the creative new ways the Angry Birds fan community comes up with to achieve all the stars," the Finnish developer says.

According to the developer, "designers are tweaking and adjusting the level, adding star ratings, and overall making sure everything works," every step of the way.

Once they're happy with the level, though, the burden is passed to a separate group of guys and gals in quality assurance. "These hard-working guys find even the tiniest of problems and report them back to us. In total, 5-10 different people test the level multiple times."

These days, it's not enough to test the game on an iPhone and call it a day. As the smash hit has ballooned into the realm of Android, Windows Phone 7, iPad, various Android tablets, and Freeview boxes, each device and operating system must be thoroughly tested.

Even after the levels have been released, it's not over. Rovio recently went back and tweaked a bunch of older levels to make them easier. "These levels were proving to be too challenging for a number of players, so we decided to tweak some of them."

"We're always trying to improve the experience for everyone, and this round of level fixes is part of that process." 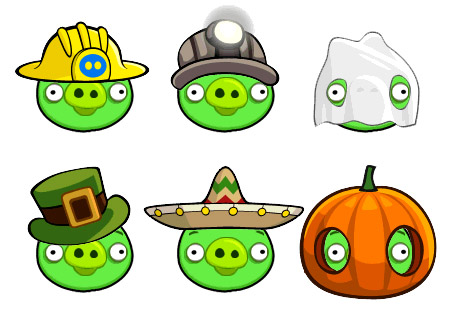 Some Angry Birds levels hide golden eggs (or golden fruit, if you're playing movie tie-in Rio) for you to hunt down and collect. They're a shiny cherry on the top, designed for the most ardent players (or followers of our strategy guide) to find.

"We want to have fun with these," Mäki says. "Sometimes they're obvious, but in some cases they're completely nuts and fun to figure out. The main goal is to have them placed in the levels so that you can't get them during the normal play."

"We always encourage people to come back to older levels and find all the hidden collectibles."

Want more? Check out our 18 other Angry Birds features!