In this country at least, golf is considered by many to be an elitist sport due to the prohibitive cost of equipment and excessive green fees.

But this latest instalment in the popular Let’s Golf! series attempts to ensure that the sport’s virtual counterpart does not attract a similar reputation. So it's free.

Or rather, it's free with in-app purchases, and while its freemium structure works in places it risks alienating fans of the traditional Let's Golf! experience.
Fore!

You start by customising a cartoonish character whose appearance, skills, and equipment can be altered and developed.

You can use your character on six fictional courses located in exotic locations like the pyramids of Egypt and the Milky Way. Courses are colourful and richly detailed, with lush greens and fairways.

Strokeplay and Matchplay (duels) are possible on all 18 holes of each course, and there are 18 challenges available. A maximum of three stars are awarded depending on your performance, with each hole or challenge unlocked once you've achieved at least one on the previous hole.

XP is acquired in all modes of play and improves your custom character's level, which in turn improves stats, unlocks courses, and unlocks new equipment in the shop. XP can be earned simply by playing a hole, with more awarded for feats such as pars, birdies, and eagles.

The control scheme hasn't changed significantly from previous iterations. Once you've selected a club you aim your shot by touching the sides of the screen. Strokes are initiated by touching a golf ball on the bottom-right of the screen, while power and accuracy are determined by a meter.

Pay as you go

Let’s Golf! 3 is very similar to its predecessors in terms of how it looks and plays. What's radically different is its freemium structure, and in particular the energy system.

Playing a hole requires you to use one unit of energy, which is restored over time or through normal play. Energy is replenished at the rate of one unit per hour, and waiting for the clock to reset is perhaps one of the most tedious exercises you're ever likely to undertake in a game.

The most efficient way of acquiring energy is by using the in-game cash, which can also be won in the game by proficient players but is more easily acquired via in-app purchases.

If you're unable to do either of these, then Let’s Golf! 3 can turn into an extremely frustrating waiting game.

Although this payment structure means that everyone can play an excellent golf game for free, it also runs the risk of alienating its core audience. An option to purchase the game outright would have appeased those fans.

Let’s Golf! 3 plays as well as ever, but the absence of significant new features and the introduction of the obstructive energy system ensure that it's a disjointed experience likely to appeal only to those with serious amounts of time or money. 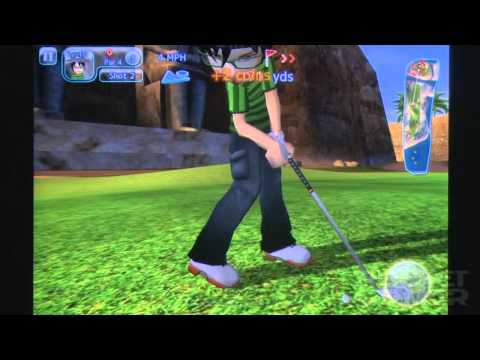 Let’s Golf! 3 plays and looks fantastic, but its use of in-app purchases and its energy system means it borders on unplayable for those without bottomless pockets
By Steve McCaskill
| Aug 15, 2011 |
iOS + Android
Find out more about Let's Golf! 3

It's Groundhog Day for Gameloft as Let's Golf! 3 heads to iOS and Android