Ransacked and crippled cities do not look beautiful, as anyone living in the UK this week will testify. So why is it that Anomaly Warzone Earth’s burnt-out rendition of Baghdad in the near future looks so utterly gorgeous?

Just having pretty graphics alone doesn’t make a game worth its asking price, however, so it’s a good job Anomaly has the brains to back up its exquisitely crafted reverse-tower defence levels.

As with all tower defence games, each of the 15 Campaign levels across the ravaged city features a convoy of units snaking their way down a set path in an attempt to bypass the tower-based defences and reach a target area (a base or special unit, normally).

Unlike every other tower defence game - you’re the one attacking.

Before each level starts, you’re shown your starting position and where you need to go, given an objective by generic English Army Man (which varies between escorting ground and air units, blowing up specific turrets, and taking down large installations), and a handful of dollars to buy APCs, rocket launchers, tanks, plasma throwers (pardon?), and other goodies.

Your troops are hopelessly outnumbered and outgunned, though, so to help you make your way safely to the end you also get four different types of special bonuses to deploy once the action gets underway, ranging from healing powers and decoy targets to powerful airstrikes and sneaky smoke screens.

Before that happens, the all-important planning takes place. By tapping on intersections, you can alter the route your men take through the husk of the city - either avoiding heavily defended avenues or striking a path straight through them.

Why would the latter be useful? Because each turret destroyed has a strong chance of dropping another of those aforementioned power-ups, each of which can turn the tide back in your favour if deployed correctly. The easier route may actually lead to you running out of weapons to use, which normally spells trouble.

Also adding to the strategy is the fact that both the route and your troops can be altered, upgraded, and expanded upon at any point during the battle.

Short of healing drops but with a damaged tank leading the unit? No problem - place the APC first and upgrade its armour. About to be sucker-punched by a Behemoth turret? Drop down a decoy and pop the rockets at the front of the queue.

It’s this on-the-fly tactical gameplay that makes Anomaly so enthralling. The initial concept may be interesting on its own, but it’s the multiple approaches to each situation and the often tense and frantic firefights that erupt out of them that keep you glued to the screen.

Despite originally being a PC release, the controls feel completely suited to the touchscreen, especially on the iPad, where the increased screen estate also allows for the graphics to shine even brighter.

The Campaign is a decent length - clocking in at around three to four hours, but a three-tier difficulty and medal system do a good job of tempting you back for more.

Completing it isn’t the end, though - two more modes, Squad Assault (a wave-based version of the game) and Commander Trials (complete the Campaign missions with different objectives), unlock once you’ve saved the planet from the alien menace.

Anomaly Warzone Earth is a strategy game that’s as beautiful as it is brainy, approachable as it is deep. It’s smooth, slick, and easy to play, yet capable of producing moments of real tension and panic from some cleverly designed missions and well-balanced units.

To put it another way, if you’re a strategy fan, you need this game. 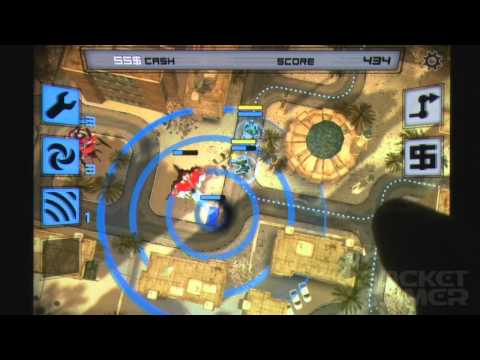 It's the Super Swinging Brothers

Infinity Field soon to be shooting up iPhone