No matter how HP might like to dress it up, there was only one target when the firm was drawing up the plans for its debut tablet: Apple's iPad.

Such is the rate of growth within the tablet market that it's perfectly possible most, if not all, of iPad's new rivals will make a healthy return without ever even shifting a fraction of the units Apple pushes out.

In other words, winning big in this market doesn't necessarily mean taking down iPad in the process.

Yet the combination of webOS 3.0's slick interface and the quality of the hardware itself (see our TouchPad review for details) means HP has served up what is potentially iPad's closest cousin to date.

PlayBook aside, it's the one alternative in which software and hardware meet in the middle, owing to HP's controlling hand in both regards.

Can it really serve as a viable alternative to iPad 2 on the shop shelves, though? When iOS 5 rolls out this autumn, is there a cat in hell's chance you'll utter the word 'TouchPad' when the prepubescent shop assistant at your local electronics store mumbles in your direction?

Undoubtedly, the one area where all of iPad's rivals – even those with access to Android Market – fall down in the face of the competition is the number of games available.

Even before picking up a TouchPad, it's clear the device's library isn't in the same league as iPad, given that no tablet is.

Nonetheless, the number of tablet-specific games on HP's App Catalog at launch came in at past the 100 mark, and that doesn't include the thousands of Palm Pre titles that also run on TouchPad by default.

Impressively, HP has also managed to source a number of big names from day one – both Angry Birds HD and Angry Birds Rio HD are likely to be essential purchases for many consumers come purchase. 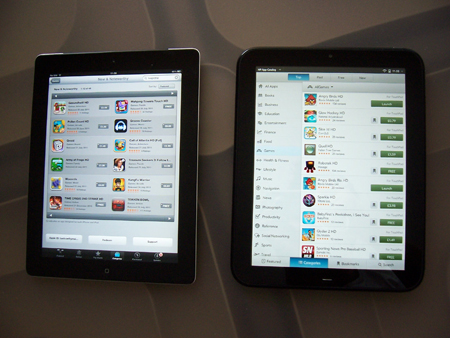 If the number of games available for a device is the crucial factor in determining your purchase decision – and given that you're reading a site called Pocket Gamer, chances are it is – then iPad 2 is your tablet of choice by some distance.

It's a controversial one, this. Have a quick fiddle with the demo pods down your local high street and you'll quickly come to the conclusion that, of the two, iPad 2 has the most to offer.

On a purely stats level, it's hard to argue: though iPad 2 and TouchPad sport the same 9.7-inch screen at 1024x768 resolution, HP's tablet comes with only one front-facing 1.3MP camera.

In contrast, iPad 2 has cameras both front and back - albeit the latter coming in at a more modest 0.7MP. 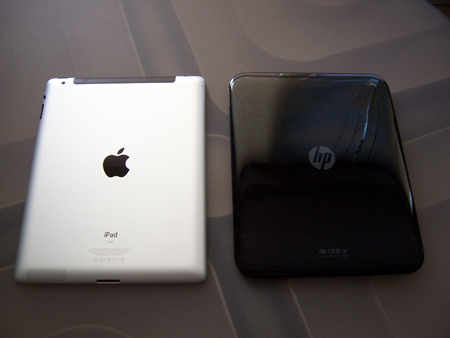 Apple's tablet also wins out in terms of storage. While TouchPad comes in 16GB and 32GB variants, it can't match the high-end 64GB model Apple currently shifts, not to mention the fact that HP currently only sells wi-fi only editions.

But, pure numbers aside, there's one crucial area where a day or two's use with both devices highlights HP's advantage: design.
Apple's iPad 2 is a thing of beauty. Even five months or so down the line its crisp thin form factor is still something to behold, and the lack of chunky buttons or any design intrusions whatsoever means it feels like the Lamborghini of the tablet market.

Problem is, like all sports cars, extended use proves it to be a less than practical setup.

TouchPad's extra weight and thickness actually prove to be an advantage. It feels sturdier and more secure in your hand.

That's partly down to device's curved back, which moulds itself to the shape of your hand in much the same pebble-like way as its smaller cousin, the Palm Pre 2. TouchPad is also something of a looker in its own right: rested on a Touchstone (HP's cable free charging device), it's arguable that TouchPad matches even iPad 2 for looks.

As such, while iPad 2 wins on stats alone, the more usable hardware of the two is TouchPad, making this one too close to call.

Given iOS 5 is nearing its due date, we saw fit to install the beta version of the OS on iPad 2 for the purposes of this comparison, if only because notifications in particular are one of the update's strong suits.

Indeed, there's a multitude of ways you can set up notifications for iOS 5 on iPad 2 – either en masse or for individual apps – but the most efficient way is for alerts to be displayed in the middle of the screen when the device is locked, with the most recent notification flashing away at the top.

From here you can either click on the individual tabs to go straight to the app in question or unlock the device and use the pull-down menu at the top of the screen to see a Facebook-style list of all your recent alerts.

Notifications now also no longer interrupt play should you be invested in a game. Rather than pausing the title in question and popping up in the middle of the screen, they slip into view along the very top bar, easily ignored if you so choose. 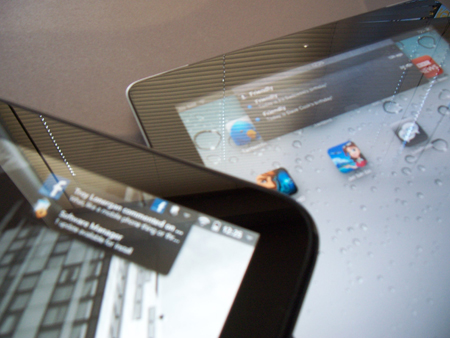 It's a notable improvement over the current system, but one that only brings iOS into line with the competition.

Notifications is an area where webOS has been outperforming Apple's platform for some time. As is now the case with iPad, TouchPad displays notifications in a handy list in the centre of the screen when locked off.

If the device is unlocked, all such notifications appear along the top bar automatically. You can either tap one to go to the app behind it, or dismiss it by swiping it away with your finger.

Aside from this, icons repeatedly appear along the top bar wherever you are in the OS, which keeps you in touch with your emails, Facebook, or Twitter app replies without the screen itself being impeded upon.
Like Palm handsets, TouchPad also has a white light hidden behind the home button that will flash away should you receive a notification while the device is asleep, meaning you're always aware when someone is trying to get hold of you.

Essentially, however, both platforms offer what is largely the same notification system, albeit delivered in different styles.

One area where iOS 5 makes no noticeable strides, however, is multitasking. This happens to be one of webOS 3.0's signature moves, with apps loading up as separate tiles that can then be switched between with a stroke of a finger.

As well as looking pretty damn swish, said tiles – or, perhaps more accurately, pages – are grouped together per app, meaning tapping a link will result in the associated webpage being pinned to the app it came from.

Each app can then be closed down by swiping it away towards the top of the screen. It's a simple but slick approach that HP's rivals would do well to steal.

In comparison, iPad 2 sticks to the current iOS setup of lining up any apps in use in the bottom bar, accessed either by double-tapping the home key or swiping up with four fingers or more.

You can then close each one down by simply holding your finger on the app icon and hitting the 'x' in the corner. But it's an approach with limitations. 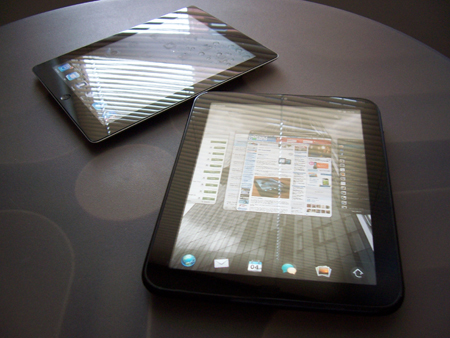 Namely, it's very easy to lose track of how many apps you have running at any one time.

Though Apple claims there's no need to ever close down any of the apps in question, we all know that if left long enough multiple titles the iPad 2 will suffer a drop in performance, and an app or two may even crash.

This is one area where iOS 5 could have done with reinventing the wheel. The current setup ultimately feels antiquated, and in no way compares to the 'full multitasking' model offered by TouchPad.

This will, perhaps, be the dividing line between most prospective TouchPad and iPad 2 consumers.

For better or worse, iOS offers the model most of us equate with a typical smartphone OS user interface – so much so that scores of Android skins attempt to ape it, as far as their lawyers will allow.

There's no denying that it's incredibly easy to grasp, too. The subtle upgrades Apple has rolled out update after update are continued in iOS 5, ensuring new features fit into the model we've become accustomed to.

As an aside, new initiatives such as iCloud also threaten to further bed existing iPhone or iPod touch users into the iOS family, making the purchase of an iPad 2 for many almost inevitable. 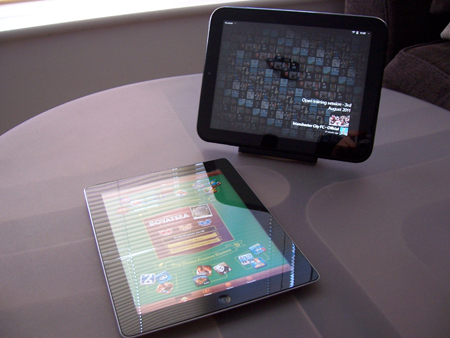 HP's webOS 3.0, however, feels like a close cousin. Palm always ensured webOS's approach would be familiar enough to those with experience of rival platforms, but the OS is not without notable traits of its own - notifications and multitasking being two of note.

As such, while it's hard to recommend any tablet other than iPad 2 for those with an iPhone in their pocket, TouchPad offers a better port of call for the rest than either the majority of Android-based devices on the market or BlackBerry's PlayBook.

TouchPad's gesture controls are a key selling point, allowing you to swipe upwards from the bottom of the device to pin an app to the dash, or close it by pushing it off the screen altogether.

It's an intuitive approach that has survived the leap from Palm's webOS handsets, matching the overall level of sheen HP has built in to every corner of TouchPad. Even the simplest of tasks - such as buying apps within HP App Catalog, or updating them in the Software Manager - become must-see events.

The first time you pick up an app, for instance, it's hard not to squeal with glee as the 'purchase' button itself turns into the title's download progress bar, all without having to dump you out of the marketplace.

Put simply, when it comes to attention to detail and sheer usability, both Apple and HP deserve major plaudits.

But if you think a score draw leaves you high and dry, fear not: there's a very simple way of working out which tablet is the best fit for you.

The points above are testaments to the quality of both devices. Dip your toe into either for a day or two and you'll find it hard not to fall hopelessly in love with both of them. 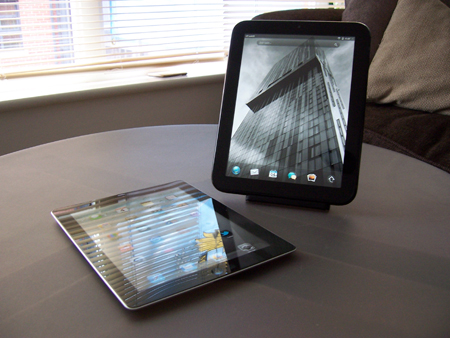 Both iPad 2 and TouchPad are extraordinary pieces of hardware that, unlike scores of other, cheaper tablets, know what their users are likely to use them for.

If, as will be the case with most people, you can only afford to pick up one, however, the question you need to ask yourself is this: do I want to buy a tablet that taps into the biggest ecosystem available, or do I want a device that manages to evolve the tablet form factor in a few significant ways?

If you want apps, apps, and more apps, then iPad 2 is the only option - not just when weighed against TouchPad, but as a general rule. The competition just can't compete.

For everyone else, TouchPad offers notable advantages over Apple's slate in terms of design and UI and, as such, is something of a rarity: a tablet that manages to step outside iPad 2's weighty shadow.