The update, which adds 15 new levels via the unlockable Iceopolis themed pack, also brings enhanced aiming controls and the much-requested quick restart feature, and is now available for the iPhone/iPod touch and separate iPad HD versions.

This brings the total level count to over 230, plus you can get an additional free level emailed to you each week.

In the spray shop

The other big change to the game is the addition of the in-game store. In conjunction, you now get rewarded with coins for each level you complete, as well as for playing at least one level daily for 10 days, and hooking up your game to Facebook. 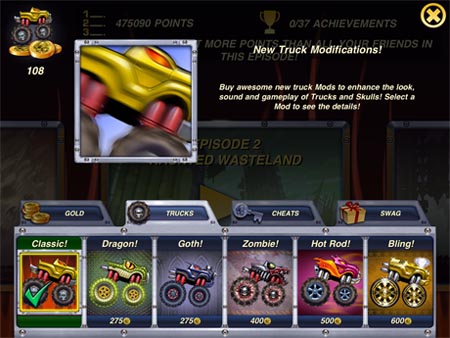 The point of the coins is they enable you to unlock new skins, voices/audio themes and abilities such as supercharged up speed, blood sucking abilities and extra damage for the various trucks, providing loads of replayability.

Other buyable options include cheat keys to unlock the six chapters and swag such as Truck & Skulls' wallpapers.

The bloks fall from four directions