Plant vs Zombies action figurine competition: We have a winner

Pocket Gamer's Plants vs Zombies action figurine competition has drawn to a close.

We had lots of entries - some funny, some gory, some funny and gory, and some just down-right imaginative.

Our winning entry is one of the latter - a 552 word essay which follows a zombie through television stardom, brain addiction, a James Bond cameo, and a pop concert in Beijing.

Check it out - along with some of the other entries - below.

"The zombie was trying to eat my brain, so I ran to my local citizens advice bureau, grabbed my Z218 zombie disciplinary form, and reported the zombie for malpractice at work, although this made working together for the next few weeks rather awkward the zombie eventually came to understand and we became friends.

"We stared seeing each other out of work hours and eventually ended up writing a stage show together based loosely on the life of the chuckle brothers. I played Paul he played Barry. The zombie gave up brains and ate low fat salads instead. He sorted his life out and spent his weekends doing charity work for save the kittens.

"The show eventually became hit, even featuring on Broadway. We enjoyed the celebrity lifestyle for a while and even produced a film together; “Chuckling Vision”. The zombie, now typecast as “Barry” was even auditioned as a replacement for Pierce Brosman as James Bond, the more experienced Daniel Craig got the part instead, but the gracious Barry was given a generous cameo role in Casino Royal.

"But soon enough the fame died down, the job offers dried up and the money ran out. Barry took it badly, he got in with the wrong crowds and got back on the brains. We lost contact for a number of years. With my royalties from the film I started up my own business creating Genetically Modified plants that defended customers lawns from trespassers. Unfortunately, I was forced to drop the product on health and safety grounds.

"As time passed I became more and more concerned of the well-being of Barry, I put up flyers in local catteries and brain surgeries but nothing. By this time I was working in my own tricycle factory which I’d built with the last of my royalties in an effort to create jobs for disadvantaged zombies in the area and perhaps establish contact with Barry. On a business trip to one of the suppliers in China by sheer luck I succeeded in my long term mission!

"I had inadvertently found Barry! It was on the radio I first heard him, he sounded older more travelled but it was defiantly him. I phoned the radio station immediately and after a huge struggle with the language barrier they eventually arranged a meeting for me and Barry. We welcomed each other as old friends and after a lengthy discussion he offered me VIP tickets to his latest gig in Beijing.

"In the time I’d been out of contact Barry had pulled himself out of the gutter and set out trekking across china as a form of self discovery. One day whilst hiking Barry was singing to himself in his deep zombie groan. Villagers in a nearby settlement were so impressed buy his vocals they chased him down and took him to a talent spotter for China's state radio. The station was so impressed they gave him near unlimited airtime and arranged countless gigs for him.

"He released countless records “Eating plants,” “I like tricycles” “Riding ma dolphin” and many more. Barry became China’s most successful ever pop star. That record still exists today with over 1 billion fans. We stayed in contact and lately he tells me he’s hoping to break into the western record charts. I can only hope it goes well for him, I’ll keep you all posted."

"The zombie was trying to eat my brain, so I ran to my desk, grabbed my iPhone, and downloaded a copy of Plants vs Zombies which happened to be on sale. The zombie was instantly intrigued by the fun and addicting gameplay so we took turns playing and soon became great friends. Then I bashed him in the head with a spade while he was distracted."

"The zombie was trying to eat my brain, so I ran to my bookself, grabbed my enormous Walking Dead omnibus, and made him eat that while I made a run for the Pub."

"The zombie was trying to eat my brain, so I ran to my safe, grabbed my brain and stored it safely away. Unfortunately I forgot the combination because I don't have memory anymore."

"The zombie was trying to eat my brain, so I ran to my boudoir, grabbed my Bahn Hammer, a very large semi auto machine gun that can easily be toted around on my back, and my gas mask. I quickly turned around, putting on my gas mask and with all my might smashed in the brains of the zombie. Blood spewing everywhere and brain matter dripping from the hammer I turn to face the door, an onslaught of zombies pouring in."

Thanks for all of your entries. 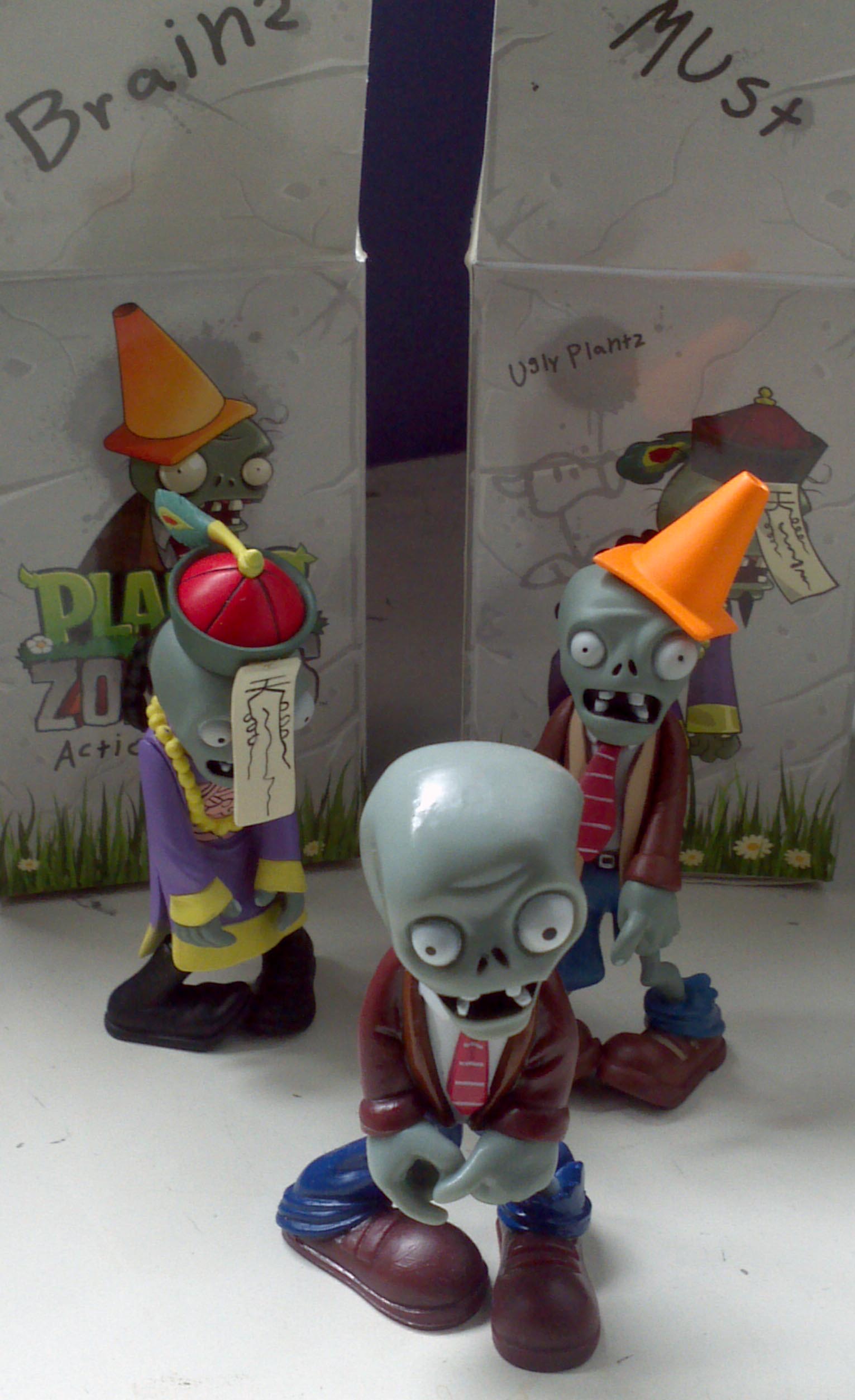 Want more? Check out our 29 other Plants vs Zombies news stories!

10 minutes of The Legend of Zelda: Ocarina of Time 3D