Welcome back to the Friday Five, a weekly round-up of the best in iPhone gaming. Every week we hold our breath, plunge into the murky depths of iTunes, and - six or seven hours later - come back ashore with some gems to share with the world.

This week our eagle-eyed contributors have spotted a new football game, more musical fun from Cipher Prime, and a crazy game where your holiday snaps become impromptu platformer levels.

If you've got a new game coming out and you'd like us to cover it on the Friday Five, send us an email. Contact details for the entire team can be found here. 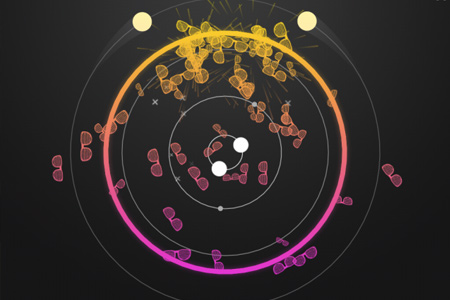 This gorgeous new music game for iPad comes from Auditorium creator Cipher Prime - a developer that is quite adept at turning orchestral, ambient tunescapes into compulsive rhythm games.

The latest is Pulse: Volume One, which opts for Guitar Hero-style screen tapping instead of the brain-scratching puzzles of Auditorium. The note field is warped into a circle, and pulses rhythmically from the centre like clockwork. Your job is to tap the dots that appear when the pulses pass.

Sounds easy enough, and if you pull it off, then your awkward tablet-tapping should turn into a beautiful symphony of chords and beats. But as the songs get faster and more complicated, you'll need to use all your pinkies and the iPad's multitouch screen to beat the song. Uncoordinated finger fumblers should look away now. 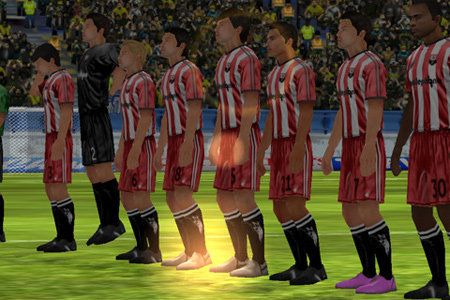 Further proving itself to be the king of mobile footy, Oxford-based Exient has released an all-new soccer game that enters the field jam packed with features, modes, and options.

You can manage a dream team of favourite players and customise their home and away kits, or upload audacious dribbles and outrageous goals directly to YouTube without leaving the app. Oh, and you can play a game of football, as well.

There's a full career mode with endless tournaments, competitions, and teams to beat, plus multiplayer for local and online kickabouts. It's also one of the best looking sports games on the App Store with gorgeous Retina display visuals and more than 60 unique celebrations. We'll have a full review up soon. 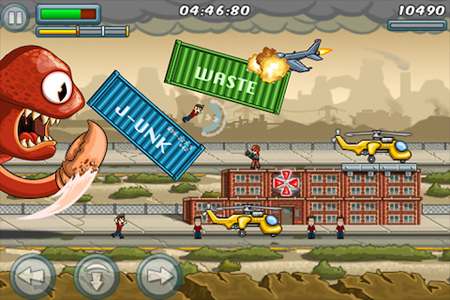 The mysterious Destructopus is a peaceful mollusc. He usually snoozes on the sea bed for centuries. But once he's rudely awoken by greedy oil industrialists, he surfaces to find the once-green Earth replaced by a polluted, hollow husk of a planet.

So, it's time for some sweet ethical justice in this epic, destructive action game from GlitchSoft. The angry octo takes matters into his own hands, using powerful attacks to clamp down on consumerism, snuff out toxic energy sources, save endangered animals, and cut out deforestation.

You've got four terrains to trample and 25 different enemies to squish with your unlockable set of powers. But it's not about all that. It's much simpler. As one iTunes commentator so eloquently puts it, "it's fun to just see stuff blowup on the go." 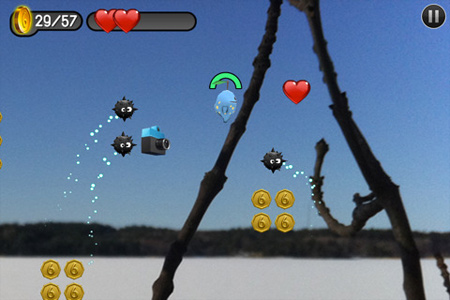 If you think you've seen everything that iPhone developers have to offer, don't. This unique game for iPhone and iPad turns your amateur snapshots into level backdrops, instantly turning a room, tree, or favourite bodily part into platforms for Picazzo.

You play a little blue guy - yep, that fellow Picazzo again - who can flutter his wings and fly about, and has to grab all the coins in the stages while avoiding nasty, spiky black things.

Simply take a snap with your device's camera and some clever image-sniffing algorithms will automatically turn lines and blocks into things your character can stand on. You can then go into the level editor and do some DIY design if you wish.

Finally, you can share your levels amongst other Piclings players. There's no LittleBigPlanet-esque database, but you can email a JPG of the stage to your buddies, or chuck it up on your Flickr account. 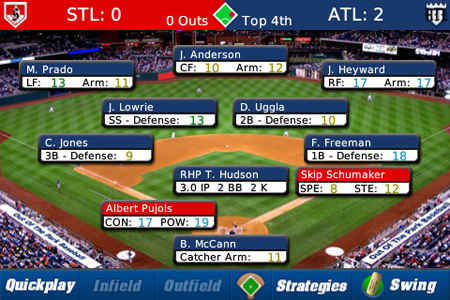 If you've ever dreamed of managing your own baseball team (and who hasn't?), this is the strategic sim for the job. Since its debut in 1998, it's been the game that baseball junkies - including statisticians, journalists, and even players - swear by.

The feature-filled app lets you choose from current MLB teams, historical players from as early as 1923, or your own dynasty of sluggers, built from scratch. Then it's time to hit the pitch, load your bases, and hit some home runs.

Well, you don't actually get to hit any balls, of course. It's a management game, meaning you'll spend as much time on the pitch as you do coding character algorithms in Game Dev Story. But if watching stats, tweaking teams, and micro-managing every player on the bench sounds like fun, then this is the app for you. Fore!