Happy Birthday to us: Pocket Gamer is 5 years old

Funny how time flies. It was five years ago today that the lights at Pocket Gamer Towers came on and the first wave of elite journalists chose their desks and started reporting on the world of portable gaming.

We've also followed the PlayStation Phone from its rumoured conception all the way back in 2006 to its official confirmation (as the Xperia Play) earlier this year. And we'll be at the birth later this month.

We've charted the rise, fall, rise, and final fall of Nokia's well-meaning N-Gage platform, the amusing Gizmondo episode, the death of the Game Boy, and of course the arrival of Apple's iPhone and the wave of competitors this quantum leap incited, the most successful of which is Google's ubiquitous Android platform.

In the last year we've documented the rise of an altogether new portable (though not strictly 'pocket') gaming platform, once again created by Apple: the tablet.

The iPad had the tablet market to itself when it arrived a year ago, but when the incrementally better iPad 2 arrives later this month (tomorrow in the US, 25th in the UK) it'll be competing with Samsung's Galaxy Tab, the Motorola Xoom, and a host of other tablets all vying to knock Apple off the throne.

Of course, these paragraphs barely skim the contents page of the abridgement of portable gaming's story over the last few years. The revolutionary impact of the App Store alone could provide material enough to fill a book.

And it doesn't stop. Four of the devices described above – the 3DS, the iPad 2, the Xperia Play, and the NGP – aren't even out yet. Nor is the inevitable iPhone 5, the fifth-generation iPod touch, and dozens of tablets, including rumoured efforts from Sony and Microsoft.

So we can't stand here and reminisce all day. There's work to do.

Later today and over the next few days we'll be bringing you a couple of highly amusing and edifying features looking back on the last five years and various other titbits of great editorial interest.

Stay tuned, and wish us happy birthday. If you like, you can even send a present. 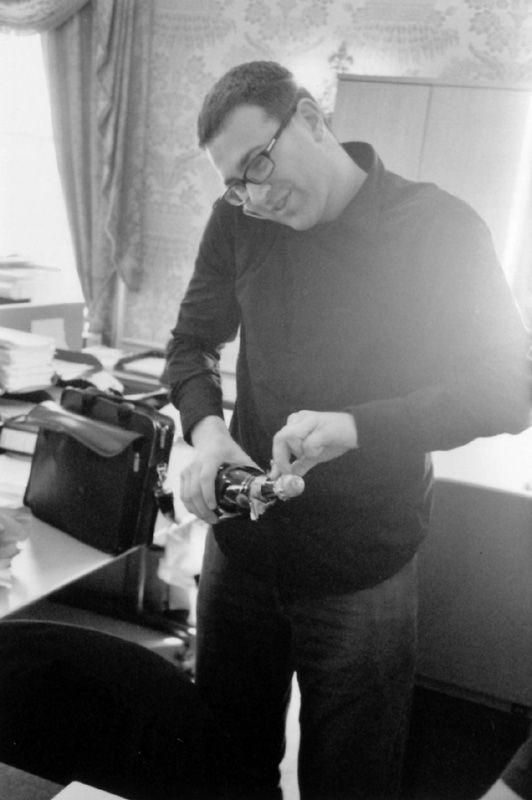 Managing director Chris James uncorks the Champagne on the day of Pocket Gamer's launch. Those of Mr James's acquaintance will recognise the familiar phone-on-shoulder posture.