When Apple created a market that previously didn’t exist with its million-selling iPad, it was only a matter of time before rival manufacturers caught the smell of impressive profits and pushed out their own tablet challengers.

Samsung’s Android-powered Galaxy Tab is seen by many as the only real competition for Apple right now, and this assumption isn’t without basis.

Android has long been the thorn in Apple’s side in the smartphone arena. It should come as no surprise to learn that it’s shaping up to be the same story in the fledgling tablet market.

However, taking into account the higher retail price than the entry-level iPad model and Google’s disastrous admission that Android won’t be ‘tablet-ready’ until the launch of Honeycomb (Android 3.0 to you and me), is the Galaxy Tab even worth investigation? Join us as we attempt to find out. 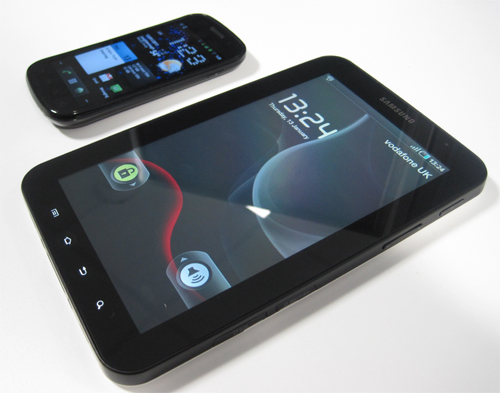 The most striking difference between the two products is screen size – the iPad boasts a 9.7-inch screen while the Galaxy Tab opts for a smaller 7-inch display. This might not sound like a massive disparity on paper, but when placed side-by-side the iPad positively dwarfs Samsung’s device.

You may instantly assume this is a bad thing – especially if you’ve listen to Steve Jobs, who last year proclaimed that 7-inch tablets were ‘dead on arrival’ – but it really isn’t. In fact, cradling the Galaxy Tab in your hand arguably feels more comfortable and natural than the iPad.

The smaller size also results in lower overall weight, and the dimensions make it easy to grip the Galaxy Tab with one hand while interacting with the other. The trade-off is obviously a less impressive screen, but you’d be surprised at how quickly this becomes a non-issue.

While the Galaxy Tab lacks the iPad’s imposing build quality, it’s hardly what you’d describe as a cheap-feeling piece of electronic hardware. There’s a pleasing amount of heft and the glossy white back grants a degree of understated class.

Add in two cameras – one for standard image/video capture and one for video calling – as well as a MicroSD card slot for expanding the already impressive 16GB (32GB on the more expensive version) of on-board storage, and you begin to see why the Galaxy Tab costs more than the most basic iPad.

It’s also important to remember that this device comes with a SIM card slot and can be used to make calls, send text messages and download data over a cellular connection – activities that cannot be done on the bog-standard iPad. 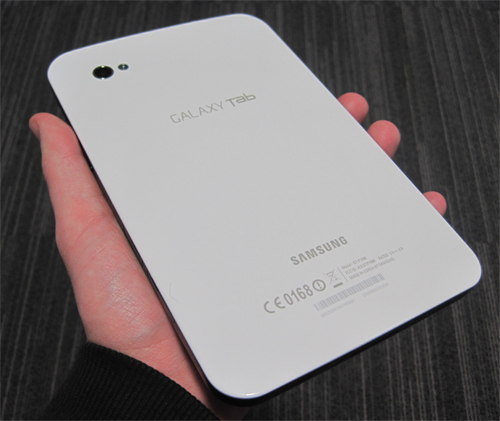 The Galaxy Tab is running Android 2.2 – also known by the codename ‘Froyo’ – which means it’s lagging behind the current curve of Google OS updates. The Samsung-built Nexus S is rocking 2.3, and the soon-to-be-released Motorola Xoom tablet will mark the worldwide debut of 3.0 – the first Android operating system to be tailored specifically for tablets.

While it’s true that the experience rendered by this device is very close to that seen on a standard Android phone running the same OS, there are enough differences to make it feel like a different product.

Firstly, Samsung has included a suite of its own apps which are designed exclusively with the tablet format in mind. These include an e-book reader and a vastly improved email client that boasts Outlook-style reading panes – something that's very welcome when you consider that Google’s current Gmail app doesn’t support such a feature yet.

Of course, with this being an Android device, existing users can sign in using their Google account and quickly port over their existing contacts, applications, and other synchronised data. This is especially useful if you intend to use the Galaxy Tab alongside your existing Android handset.

Samsung has also bundled its own app store with the Galaxy Tab, although the execution and integration is a little clumsy. When you first try to download and install a program, you’re presented with an error message that informs you that the device is configured to block non-Android Market installations.

While veteran Android users will be able to circumvent this issue quickly and easily by visiting the appropriate section of the settings menu, it’s a stumbling block that is likely to dent the confidence of newcomers. 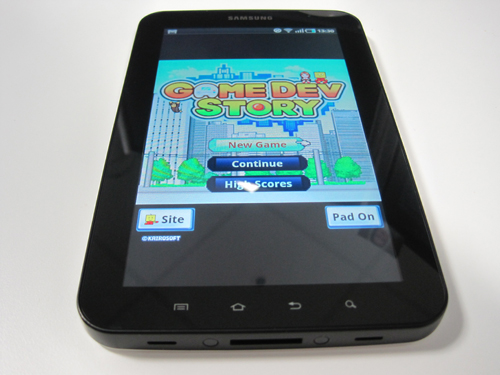 Once you do get things moving, you’re assured quite a smooth and pleasant experience. Although the Galaxy Tab’s 1GHz Hummingbird processor and 512MB of RAM are reasonably modest by today’s smartphone standards, the performance of the device is admirable - even when multi-tasking with several apps running simultaneously.

Apps that are coded to use the full potential of the Galaxy Tab’s screen look positively sumptuous, quashing all fears you may have had about 7-inches not being big enough (oo-er).

However, those apps which aren’t tailored to accommodate the increased display size are presented with ugly borders and function exactly as they would on a standard Android phone.

This is disappointing, but thankfully it’s becoming less and less of a problem as developers duly update their apps to suit. 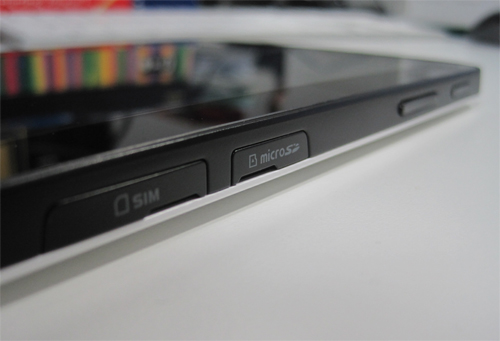 Although the Galaxy Tab impresses when it comes to browsing the web, reading books, watching YouTube videos, and running Flash, it really comes into its own when you use it as a gaming device.

The Android Market is getting more and more quality games every week, and titles like Fruit Ninja and Angry Birds look absolutely stunning on the Galaxy Tab’s 7-inch LCD screen. The additional room allows more scope for sweeping finger gestures, and HD-ready games such as N.O.V.A. HD and Asphalt 5 look as sharp as a knife.

In many cases, games feel liberated when played on Samsung’s tablet, almost as if they were waiting for a bigger screen to come along to allow them to fulfil their true potential. Needless to say, going back to playing on a standard phone feels hideously cramped. 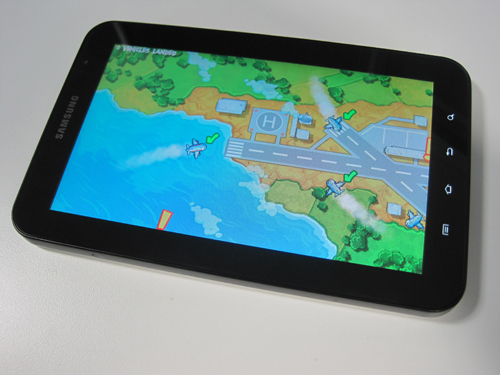 There’s no denying that of all the pretenders to the iPad’s crown, the Galaxy Tab is effortlessly the most impressive. Although its operating system is based on software that was built for phones rather than tablets, it performs wonderfully, offering an entertainment experience that is a world apart from the comparatively tiny screen of your mobile handset.

Whether or not you should take the plunge and spend five hundred sheets on this device is largely down to how bothered you are about being on the bleeding edge of technology.

There’s no guarantee that Android 3.0 will be coming to the Galaxy Tab, and the impending launch of the Motorola Xoom – as well as the rumoured announcement of the Galaxy Tab 2 – might be enough to dissuade prospective purchasers.

However, that’s the future - the Galaxy Tab is here and now, and as it stands it’s a brilliant alternative to Apple’s market leader.

Google’s Android platform once again proves itself as a viable alternative to Apple’s iOS, with this iPad rival packing in an astonishing amount of functionality into its arguably more convenient frame. As a first-gen Android tablet, this is a thoroughly encouraging achievement
By Damien McFerran
| Jan 13, 2011 |
Android