For celebrators who usually find an Apple-stamped product or two under their Christmas tree each year, this year will undoubtedly be the best yet.

Put simply, we’ve never had it so good for iDevices. Not only have we seen the most significant leap in the quality and capabilities of the iPhone and iPod touch since their initial release, but we have a whole new class of device to consider into the bargain.

The iPad isn’t just a sexy slab of glass and metal – it’s a bold pioneer of a whole new way to consume media. Buy one of these suckers for someone and they’re likely to be quite fond of you, to put it mildly.

Here’s our round-up of which iDevices to get, which to avoid, and what accessories and games to kit them out with.

As hinted at in the intro, you should really be honing your Apple search parameters down to three devices – the iPhone, iPod touch and iPad.

Forget the Nano and the Classic – they’re a whole generation or two behind these svelte gadgets, and should only be considered if they’ve been specifically requested.

Here’s a run down of the three wise buys, each of which come bearing games, music and fun. 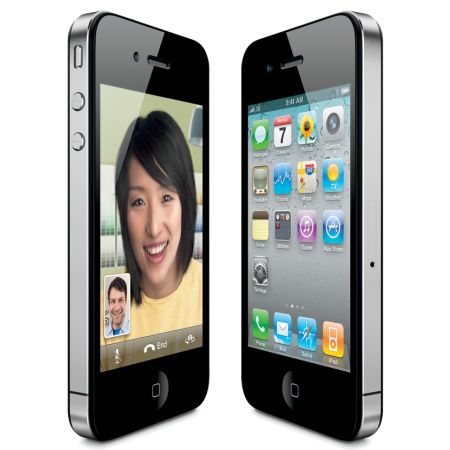 Apple’s iPhone range is single-handedly responsible for the touchscreen-accessed, app-driven smartphone experience that’s commonplace today. Launched at the end of June, the fourth iteration of the device is the best yet by some margin.

It’s got phenomenal technical prowess, as evidence by some of the games that are now being designed to stretch its legs (see below). It’s got a class-leading Retina display screen that allows for pin-sharp text. And, most strikingly of all, it’s bleedin’ gorgeous to look at and handle.

Forget all those hyped up news stories about faulty signals and death grips. There is an issue there, but it’s not the fatal flaw some would have you believe. If you’ve got the pennies, you can buy your loved one an iPhone 4 with confidence.

Avoid at all costs the iPhone 3GS. It’s not a bad device by any means, but the previous edition of the iPhone is still being sold brand new at a ridiculously premium price - just £80 less than the cheapest iPhone 4.

As the finest mobile phone money can buy, the iPhone 4 doesn’t come cheap. A cool £499 will get you the 16GB model from Apple (SIM-free), while you’ll have to pay a whole £100 more to double the memory to 32GB.

If you get it on contract you can expect to chop a sizeable chunk off that fee, usually on an 18 month contract – but bear in mind that would cause your receiver to miss out on the iPhone 5 entirely. Tesco offers 12 month iPhone contracts, which is probably the best deal all round. 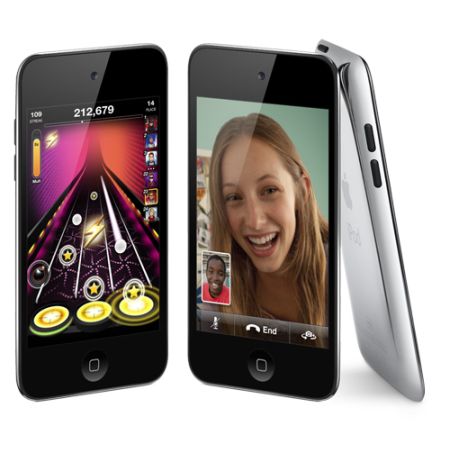 On the surface, the fourth-generation iPod touch sees the device getting even closer to the iPhone's feature list, although dig a little deeper and you’ll see that Apple has cut one or two corners.

Apple has finally added a camera to the iPod touch range, although it’s nowhere near up to the standard of the iPhone 4’s impressive snapper. In fact, it’s not much use for taking picturess at all, as it’s mainly intended for taking video and running the FaceTime video calling application.

The screen, too, isn’t quite as good as the iPhone 4’s (though it’s still brilliantly sharp), and the device only features half the RAM of its big brother.

In practical terms, though, none of that really matters. What matters is that you can get an iPhone 4-level device from just £167 on Amazon (for the 8GB model). If you want a little more room for your record collection, you can get the 32GB model for £223.10 or the 64GB model for £289.

If you know a person who wants a decent portable media player and is quite happy with their phone, don’t waste money on an iPhone 4. The iPod touch is a wafer-thin pocket marvel for a pretty reasonable price. 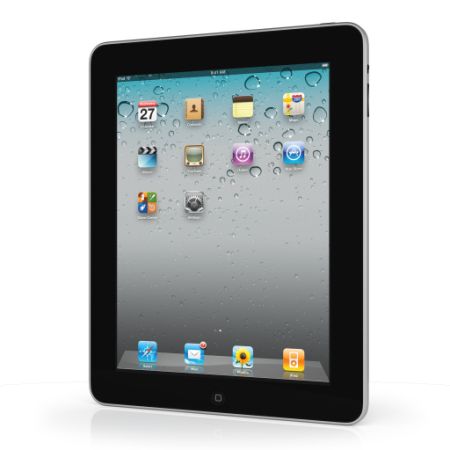 The iPad is an unusual device. Most people will know what role an iPod touch or an iPhone 4 will play in their lives - one’s essentially the latest step on the evolutionary ladder of the Walkman, the other’s a mobile phone. The iPad has no such lineage to help define it.

The tablet market is an all new one, sitting somewhere in between portable media players and netbooks, yet lacking the portability of the former and the flexibility of the latter.

That’s the detractors’ viewpoint of the iPad. If you’ve ever spent any length of time with one, you’ll likely feel completely differently about it.

You know those times when you’re lounging on the couch browsing the internet on your phone because you can’t be bothered to move to your computer, or to wait for your laptop to boot up? That’s the unique pocket of time the iPad enriches and makes its own.

Simple things like browsing the internet and booting up a video just feel better when they’re literally at your fingertips and at a comfortable viewing size. What’s more, many iOS games simply play better with the extra screen area afforded by Apple’s ten-incher.

There’s an extra consideration when buying your iPad. Not only do you have to decide how much storage space your want (16GB, 32GB or 64GB) but you also need to determine whether a 3G connection will be necessary.

Is the person likely to want to take their iPad out and about much? And if so, will they be using it in coffee shops (where there are usually wi-fi hotspots) or on public transport (where there usually aren’t)?

If you opt for a 3G model, you’ll need to purchase a micro-SIM and an accompanying data plan, for which your best bet is probably 3. The operator offers a 1GB monthly data allowance for £7.50 a month, or a generous 10GB plan for £15 a month.

The most important iDevice accessory of all is common to all three units – you simply have to buy a new set of earbuds. It’s especially essential for the iPad as it doesn’t ship with any, but those that come with the iPhone and iPod touch really aren’t much cop anyway.

While nothing beats a good set of headphones, for portability's sake we’d recommend investing in a decent set of squishy in-ear buds, which mould to the shape of your ear. This vital bit of rubberised tech forms a seal that improves bass and reduces noise-bleed.

We’ve already recommended them elsewhere, but Sennheiser really does make some excellent value earbuds. Check out the Sennheiser CX500s for around £17 on Play.

Also essential to each device is the means to buy games, music, and videos. It’s very simple – iTunes Gift Cards give you prepaid credit for use on iTunes. They come in £15, £25, or £50 amounts, and each sports a snazzy design. Head on over to Apple to purchase them.

It’s a shame to spoil the lovely clean lines of the iPhone 4, but the truth is those exposed screen edges make the device the most vulnerable iPhone yet. It’ll stand up to everyday use, but drop your £500 phone onto any kind of hard surface and you’ll be asking for trouble.

Adding a protective bumper provides some protection for the vulnerable bits while allowing the lovely glass back and front to shine forth. They also have the handy side effect of nullifying the much-hyped signal issue that occurs when you hold the device a certain way.

Apple has since stopped its offer of a free bumper, which was introduced to quell the antenna complaints. Buying this official solution will set you back an eye-watering £25, so you’re best of with one of the better unofficial alternatives, which can be had for a couple of quid on Amazon.

While you can get by without an iPhone case if you’re careful (and have a nice padded pocket set aside for it), an iPad case is absolutely essential. Thanks to its slightly prohibitive size you’ll be carting Apple’s wonder-tablet around in your bag, where it’ll be rattling around against keys and pens and metal Transformers pencil cases. Er, if you’re a kid, of course.

It’s worth investing in a decent one, whether that be at the stylish end of the scale like the Hard Graft examples espoused by our very own Jon Jordan, or the more functional (and cheaper) variety.

If you’re looking for the latter, give this TeckNet variety a spin at only £12.88 on Amazon. In addition to the excellent price it’s reasonably good-looking and doubles as an adjustable stand for the device.

The goal in this physics-based puzzler is to build a series of giant bridging structures out of sentient globules of goo. It’s only just been released on iPad some two years after its initial release on PC and Wii, but this iPad version is, according to developer 2D Boy, the best version “by far” thanks to the device’s touchscreen controls. £5.99 on iTunes.

As a technical showcase for the latest generation of iDevice, you can’t get any better than Infinity Blade. Built on the stunning Unreal Engine 3, ChAIR’s game features breathtaking graphics that you would more commonly associate with the console sitting under your TV.

It’s not just a pretty face, either – Infinity Blade is an enjoyable and absorbing action RPG in its own right. Rated 9+, £3.49 on iTunes.

One of the most enjoyable and technically accomplished racers on any iDevice, Reckless Racing makes brilliant use of the technology at its disposal.

That means slick 3D graphics and online multiplayer modes for all three of our recommended devices, and extra courses for the top-of-the-tree iPad. Rated 4+, 59p for iPhone and £2.99 for iPad versions on iTunes.

EA’s Mirror’s Edge is a slick platformer with immensely impressive production values. Like the other games on this list, Mirror’s Edge makes full use of each iDevice’s capabilities.

That means pin-sharp Retina display-optimised graphics for the iPhone 4 and iPod touch (4th gen) and a fantastic split-screen multiplayer mode for the iPad original. Rated 9+, both iPhone and iPad versions £2.99 on iTunes.

Rumour: Apple to start selling unlocked iPhone 4s in the US this week