We’ve got a fine mix of full games, freemium offerings, and lite tasters this week. The only unifying qualities are that they’re all free, and all very good.

We’ve got sports, doodles, and free-floating puzzlers. A couple stem from the ever-popular FreeAppADay initiative, while the others are simply afloat on the vast seas of the App Store.

One such app is our weekly Crap App pick, but we’ll do our best to scuttle it so it never reaches shore. Sorry, I’m not sure where the nautical analogy came from.

Neon Play ditches the full rules of pool in favour of a series of one-shot challenges. These get ever-more outrageous as you progress through the stages, starting with simple cuts and going through to elaborate multi-cushion shots.

There’s no set limit as to the number of shots you’re allowed. Rather, there’s a simple star system that rewards efficient play, but doesn’t punish you if you take 20 shots to hit that tricky double. All in all an addictive game that even non-Pool fans can enjoy.

Gameloft has just released a demo of the excellent sequel to Let’s Golf. Let’s Golf! 2 is a remarkably solid and fully featured golf game that, as Tracy noted in his 9/10 review, addresses virtually all of the issues that we had with the first game (which wasn’t bad itself).

It features the same brand of accessible, cartoony golf (admittedly ripped straight from the Everybody’s Golf series) as the original, but with an improved swing system and – praise be – online multiplayer.

Of course, that’s the full version. This free taster includes three holes taken for three very different courses, as well as a glimpse at the Mini-Game challenge mode. Well worth a look.

We Doodle
By ngmoco
Type Freemium

We’re big fans of Depict on Pocket Gamer, and We Doodle is an interesting rival.

It’s not as immediate as Makeshift Games’s effort, but there’s a bit more sophistication and flexibility to ngmoco’s take on online charades. For example, you need to type in the answers rather than picking from a multiple choice, which requires more effort, but opens up a much broader challenge.

I still prefer Depict’s effortless, honed charm, but anyone looking to move onto the next level of social sketching should check We Doodle out – especially as it’s free. You can purchase additional doodling supplies in-app.

Get We Doodle here.

When something original turns up in the overpopulated match-three puzzler genre, if makes us sit up and take notice. Chain Link Pro is just such a game.

Abandoning the rigid grids of most games in the genre, Chain Link Pro has you gathering up coloured blocks that are adrift in space, grouping them according to type and dragging these bundles to the swirling vortex at the centre of the screen.

The idea is to form the biggest chains possible while avoiding contact with other blocks. You also get bonus points for flicking the chains into the vortex from distance (there are some neat zero-gravity physics going on here).

With a fresh central premise, three nicely varied modes, OpenFeint integration and a whole stack of power-ups to unlocks, Chain Link Pro is one of those delightful surprises that the App Store throws our way from time to time. 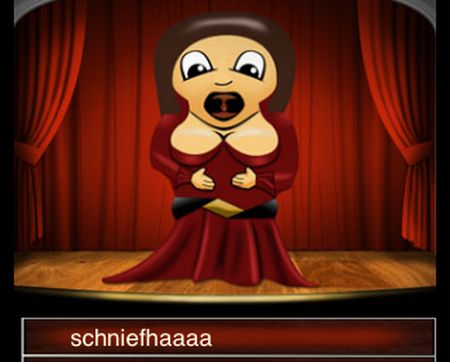 “A sigh, something humdrum,” begins the app description for iSigh. I’m afraid that oversells it a little, as “humdrum” at least suggests something fairly normal. iSigh is not just crap, it’s weird crap.

Presented with a couple of bizarre caricatures representing Opera and Theatre (and one that allows you to create your own), you then touch the figure to make it spout an inexplicable range of poorly recorded expressions. These include “ohmann” and, of course, the unforgettable “ah.”

Why? Apparently the developer is “creating laughs, amazement, antipathy and acceptance” with this app. They’re right on one count. I’m sure you can figure out which.

Who's That Flying?! PSP Minis trailer