For the second week in a row, the free offerings on the App Store are a little on the sparse side. What’s the matter, developers? Feeling the pinch?

Thankfully, the usual dependable sources of the FreeAppADay initiative and Backflip Studios are on hand to provide four tasty morsels of freeness. Hopefully we’ll see a few more efforts from other sources in the coming week.

Unfortunately (or is that fortunately?) there’s always a rich seam of digital excrement to draw from for the Crap Apps feature. This week’s example is as rancid as ever.

Isn’t it comforting to know that you can always rely on someone to create something awful?

The App Store’s saturated with Doodle Jump clones, but not many of them are as polished as Flight Doodle. The premise is familiar – get your little balloon as high as you can, passing the online ghosts of other users’ failed attempts along the way.

It’s not original, then, but there are a number of nice touches. The power-ups slowly transform your fragile blimp into a veritable weapon of mass destruction, effectively turning the game into a 2D shoot-‘em-up.

Then there’s the customisation element, which lets you sketch your own design onto your balloon. It needs optimising for older devices, but Flight Doodle is a decent addition to a crowded genre.

Triniti continues the fine form that sees its games cropping up regularly on the Trawler Report. Hell Flyer isn’t one of the better games we’ve seen from the developer, but it still knocks most free efforts into a cocked hat.

You play a daring stick-man type who must swing through an endless fiery cavern, latching onto hanging rocks with his bull whip.

The controls are a simple swipe-based affair, but the timing is very tricky – you need to account for the distance you’ll have fallen by the time your whip reaches its destination. One for those seeking a real (but accessible) challenge.

This faintly Tempest-like (YouTube it) shooter from the workaholics over at Backflip continues the App Store trend for all things retro and bleepy. It really could be a lost ‘80s shooter, if it weren’t for the OpenFeint integration and touchscreen controls.

You control a little space man who must scoot around a series of small planetoids, blasting the aggressive aliens who emerge from the craters in the middle.

It’s not among my favourite Backflip games – the touch controls are a little too fiddly - but Buganoids is still full of neat touches, like being able to shoot yourself (if you’re not careful) by running around to the other side of the planet in advance of your slow-moving missile.

The twin thumb controls work beautifully, allowing you to pop off clinical consecutive headshots with relative ease. This is complemented by some wickedly amusing between-level cutscenes that really nail the anti-cute tone.

It might not be the deepest game on the App Store, but Battle Bears is gleefully guilty pleasure. As part of the FreeAppADay initiative, it’s only available for a limited time. 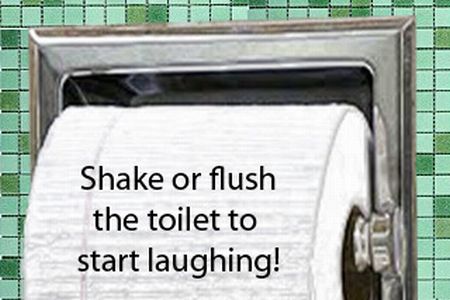 No, it’s not an illicit nightclub activities simulator that somehow slipped through the Apple censorship net. Toilet Tickles is even worse than that.

It’s a list of jokes, dressed up in a toilet theme. The justification for such a bizarre concept? I’ll let the developer explain that: “It's a known fact that laughing is stimulating and that the ideal place for reading is in the bathroom.”

No, I don’t see the logic in that either. Especially as the jokes are a) mostly unfunny, b) often in poor taste and, c) written appallingly. You’ll just have to get your toilet tickles some other way.

Where’s Wally? in Hollywood finds its way on Java mobiles