Since the Pandora project was unveiled way back in 2007, the US has elected its first black president, there has been a cataclysmic global recession, and the UK has seen a coalition government come to power for the first time in decades. It’s been a long wait.

When the team behind the Pandora announced the machine almost three years ago they probably didn’t fully understand what they were getting themselves into. The task they set themselves was almost Herculean in nature: to design and build the perfect handheld as well as creating its operating system, assembling it, and overseeing the global distribution.

It’s the kind of venture that only multinational mega-corporations are insane – and rich – enough to even contemplate, and predictably there have been several moments when the word “vapourware” was bandied around by members of the press, not to mention by the thousands of aggrieved punters who coughed up the entire asking price for the device before it had even entered production. 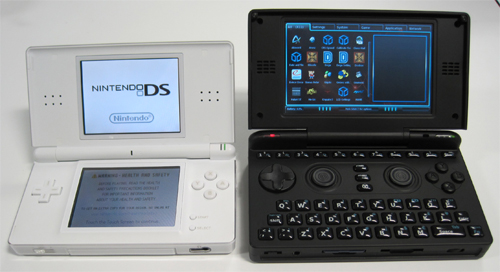 But this is all water under the bridge now. The Pandora is finally a solid reality and we know this because in our trembling hands we hold the only unit made available to the gaming press – and we’re going to lift the lid to find if the wait was really worth it.

At first sight the Pandora closely resembles a Nintendo DS Lite, albeit a little chunkier. It boasts a matte finish which ensures it won’t slip out of your hands at inopportune moments but also attracts unwelcome scratches and scuffs. It’s not a massive problem, and if you had the forethought to request an official Pandora carry case when you placed you pre-order back in 2008 then you can rest easy.

At 320g the Pandora is a heavy beast, although a lot of that weight is accounted for by the 4200 mAh rechargeable lithium polymer battery, which provides approximately ten hours of play time. This figure obviously fluctuates depending on what activity you’re engaged in.

The 4.3-inch screen is resistive touch display. Using the included stylus provides accurate input but you can also stab with an outstretched digit if you so wish. The clarity is acceptable for purpose but tasks such as surfing the web feel slightly awkward as most web pages are too large to fit comfortably within the Pandora’s 800x480 resolution display. 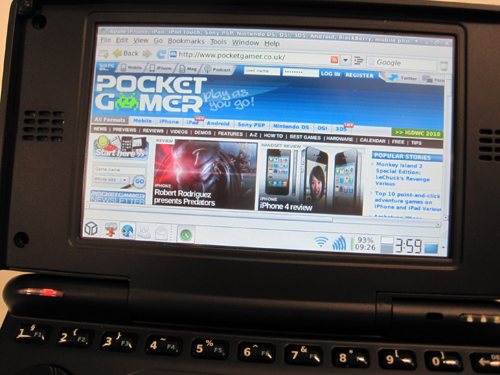 It would be fair to call the Pandora’s external design workmanlike: there’s nothing here to get the pulse racing but it’s hardly an eyesore.

Thankfully, it would seem that the creators decided to expend more effort on getting the physical interface of the machine absolutely spot-on because the Pandora’s control options are a real joy to behold.

Firstly, it boasts the best D-pad we’ve ever used on a portable device. Employing a similar design to that seen on Sega’s 16 and 32-bit home consoles, the pad grants a pleasing degree of travel and is soft without being too spongy. In short, you’ll not find a better equivalent on any mobile device.

In addition to digital control the Pandora also offers twin analogue nubs similar in design to that sported by the Sony PSP and the upcoming Nintendo 3DS. 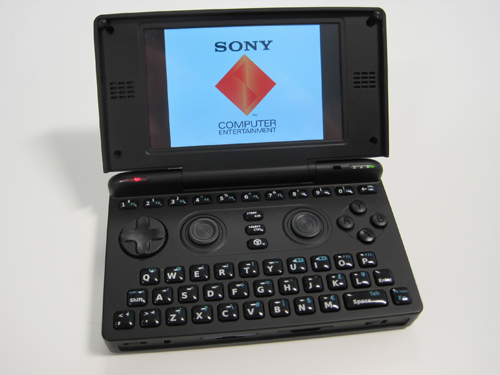 The 43-button QWERTY keyboard might seem like an encumbrance to begin with, but you only really notice the keyboard when you have to use it – and it comes in very handy indeed, especially when indulging in a spot of Amiga, Atari ST, and Spectrum emulation.

The Pandora runs on a version of the open source operating system Linux called Ångström. The default configuration offers up a full desktop environment, including a Windows-style Start Menu, file viewer, and toolbar at the bottom of the screen.

Using this setup it’s possible to customise almost every aspect of the device, essentially making the Pandora an ultra-mobile PC. If such dizzying freedom gives you a nose bleed you can opt for the simpler MiniMenu setup which is more akin to the OS seen on other open source consoles like the GP2X and Wiz. 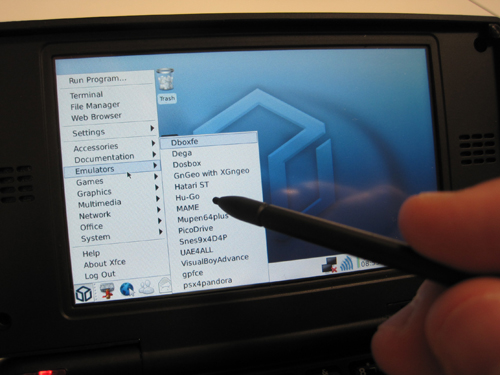 Out of the box the Pandora comes pre-installed with a web browser, Flash player, and other pieces of software. It’s possible to quickly connect to the web using the built-in wi-fi and there’s even an online repository of apps to download.

At the moment, this is done purely through the browser, but the Pandora team has hinted that an automated process is forthcoming, more along the lines of the iPhone’s App Store and Google’s Android Market.

For the vast majority of people the apps that will cause the most interest are the emulators. The Pandora is – hypothetically at least - capable of emulating every machine from the 128-bit Sega Dreamcast backwards.

Indeed, a video showing Dreamcast emulation running on a Pandora has been released and there are already programs available which allow you to play Sony PlayStation and Nintendo 64 games. 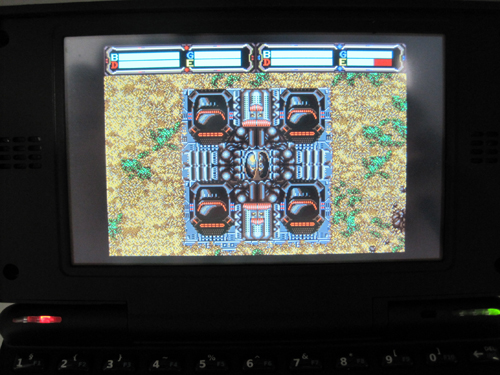 Compatibility is pretty low at present, and many of the games feature graphical or audio corruptions, but it’s early days yet – the bulk of the emulators currently available are actually quickly-ported variants of programs which already exist on other platforms.

The Pandora is essentially running unoptimised code using nothing but brute force, and as such it’s an impressive illustration of the machine’s raw power.

Going a little further backwards in the retro gaming timeline offers up more impressive results. The Mega Drive, SNES, Neo Geo, PC Engine, Master System, and NES are all replicated near-perfectly – something which wasn’t possible on the Wiz, the last great opensource handheld. There’s even a port of Quake III which plays like a dream on the twin analogue nubs.

Mimicking the performance of dusty old hardware isn’t the only trick up Pandora’s sleeve, though: homebrew and commercial games are a possibility and even now there are plenty of bedroom-coded titles which are worthy of inspection, one of the most notable being the brilliant Giana’s Return, the unofficial sequel to the infamous Super Mario clone Great Giana Sisters.

Couple this gaming power with the brilliant D-pad and you’ve got a machine which is likely to send hardcore players into gaming Nirvana, but it’s worth noting that like any piece of hardware the Pandora isn’t without its problems. 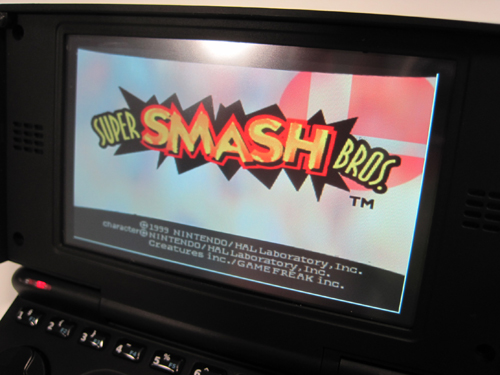 The massive potential of the device is also one of its key weaknesses – to get the most out of the Pandora requires several nights of experimentation, head-scratching, ROM-searching, and downloading of BIOS files and other tiresome tech-tasks.

This is not a machine you can merely purchase, charge up and then take outdoors - you’ll need to invest a large portion of your time to get it functioning exactly how you want it to.

Unsurprisingly, the grass-roots production process has thrown up some irksome issues, too. Some users have complained that they only have one functioning analogue nub while others have had problems with case quality or failing functionality, such as wi-fi refusing to connect.

To their credit, the Pandora team have redoubled their quality-control efforts and have made the bold assurance that anyone who experiences a problem with their machine is entitled to an exchange. What’s more, a constant stream of firmware “hot fixes” has been issued, rectifying many of the software issues which have arisen.

Such niggles are inevitable when you consider the humble background of the undertaking (lest we forget that the team are assembling the machines themselves by hand) and it’s positive to see that the people behind the project are so committed to pleasing their customers.

For the record our review unit has performed flawlessly the entire time we’ve had it. 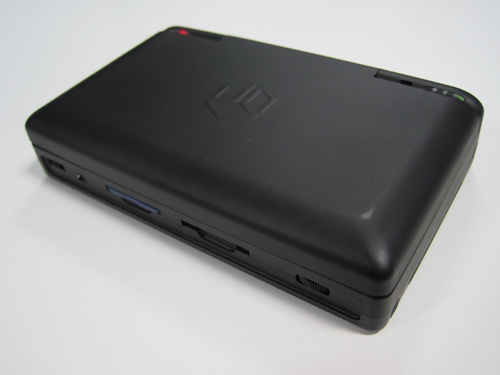 Asking people to drop over £200 on a machine which didn’t even exist was a bold move back in 2008, and God knows that the Pandora team have been through absolute hell to get make their dream a reality.

While the Pandora is no longer the most powerful mobile device available (many cutting-edge mobile phones possess more powerful CPU units now) it’s still one of the more technologically advanced gaming machines money can buy, and the fact that it can also be used to surf the net, compose emails, watch videos, and stay connected with friends via instant messaging only adds to the appeal.

Although some of the more demanding emulators currently available are fraught with performance issues it’s important to remember that the Pandora isn’t anywhere close to hitting its stride yet.

With only a handful of units out in the wild it will take a few more months of mass production before the level of coding support rises. The more people who have the system the more software will be created. It’s as simple as that.

For all of its benefits, the Pandora is not going to be a console that will find favour with everyone. Giving a device as complicated as this to a DS-loving pre-teen would naturally be a complete waste of £230, but if you’ve previously been tempted to step into the open source world by the flawed masterpieces that are the GP2X, Wiz, and Dingoo but have never plucked up the courage, then this is undoubtedly the best place to start.

Unquestionably a labour of love for its creators, the Pandora effortlessly blows away its open source rivals to offer up a truly intoxicating level of promise. The high price tag and increased demands on the user will ensure it never becomes mainstream but for those of you that value freedom and diversity in your mobile tech, this is what you’ve been waiting for
By Damien McFerran
| Jul 21, 2010 |
Mobile
SEE COMMENTS