As our research has shown, card and board games are one of the most popular categories for iPad launch games.

In that respect the news that indie developer Opetopic is bringing IsoCards - a multiplayer card game without any pre-programmed rules to the device - isn't a surprise.

Although the fact the new game will be free might raise some eyebrows.

Conceptually it's an interesting approach however, as the app is effectively a multi-touch gesture and physics-driven deck of cards that allows you to play whatever card game you want, although without any rules inbuilt into the app, it might prove a bit confusing to some people.

What's also significant is that way that different control schemes will be integrated.

As Opetopic's Brandon Williams points out on the company blog, "biggest problem with allowing multiple people play cards on the same device is preventing your opponents from seeing your cards".

This is has been handled as your cards are always dealt face down but you can cup your hand over them to get them to flip over. When you lift your hand, your cards will quickly flip back over.

Also well thought out - although not supported the initial launch iPad build - will be the option to connect to iPhones or iPod touches via Bluetooth, and transfer your cards to an individual device. 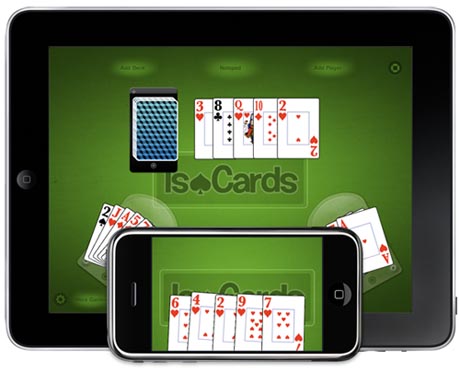 It's perhaps a bit of overkill compared to breaking out a deck of physical playing cards of course, but assuming it works, if nothing else, it will certainly be a neat technological trick.

Hands on with Fast & Furious: Adrenaline