The free iPhone game Trawler Report: Beneath a Steel Sky and Heavy Gunner give us a taste for dystopian futures

The UK prices for the iPad have just been leaked - are you still up for playing all your iPhone games on a big old tablet screen if you have to pay £400 for the privilege?

Thinking about it, the £389 the 16GB wi-fi edition of the iPad reportedly costs could be used to buy more than 650 59p games. As we’ve learnt, many of the iPhone’s best games cost 59p.

Even if you let the Trawler’s weekly picks soak up the cost of these 59p games, thereby saving you some cash, you’d have to endure more than two years of freebies to make the money needed to stump up the cash for the basic iPad. It’s enough to make you want to cry.

This week's Report will save you just under three quid if you let our picks replace 59p buys. Let’s get saving - it’s not long ‘til April.

Freemium titles are being released at full speed at the moment, and Car Control is HandyGames’s latest micro-transaction entry. You have to direct traffic, changing the type of junction at each road crossover with touchscreen gestures.

It’s no Flight Control casual classic, but the way you draw the junction types on the screen is a neat mechanic. The cars are painted in different colours, which indicate which exit they have to leave through.

The initial download includes the first pack of levels, with additional packs available to download from within Car Control.

Tropical Dreams 3D Free
By Digital Chocolate
Type Demo Wandering around snapping photos of people is frowned upon. People may not believe that their souls are snatched away when they’re photographed any longer, but they don’t half get antsy when you shove a lens in their face. Tropical Dreams 3D sees you grab an SLR and snap away, but in the sea rather than on the high street. In each level, you spy on the passing sealife, generally in search of a specific kind of fish to photograph. 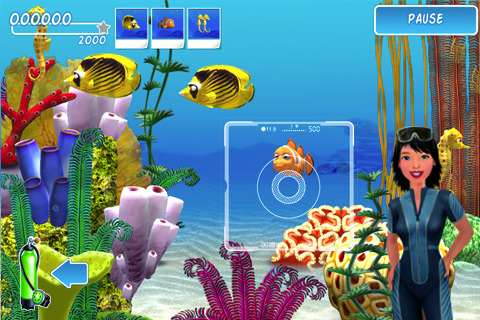 Riding a motorcycle is dangerous at the best of times, but factor-in uneven terrain and high speeds and it becomes positively perilous. Uphill Rush 2 is a trial biking-style game that tasks you with getting from one end of a level to the other, over numerous obstacles, jumps and crevasses.

You can lean forward and back on your bike to maintain balance, but with the default bike, which is a naff little scooter, this is easier said than done.

With a little patience and some careful throttle control, you’ll soon be sailing though. This free version lets you check out the first handful of levels, although we never made enough cash to upgrade to a half-decent bike. Sadly.

Heavy Gunner Free
By Com2Us
Type Demo The chances of you being able to one day step inside a tank and let loose with its cannon are pretty slim - they don’t let Tom, Dick, or Harry do that these days. Thankfully, Heavy Gunner puts you in the turret of a great big mechanised tank and lets you cause carnage.

The accelerometer controls the view of the turret, while two thumb-sticks move the reticules of your two massive guns around the screen. Other than that, you’re static - so there’s no actual movement to worry about.

Each mission asks you to blast a certain number of airborne enemies, or to survive for a certain period of time. After a couple of missions, you’ll have earned enough cash to upgrade your weapons and shields, too. Controlling your mech takes a bit of getting used to, but Heavy Gunner is worth checking out for its sheer carnage level.

Subscribe to Pocket Gamer on
Pick of the week Beneath a Steel Sky Lite+
By Revolution
Type Demo Not tried one of the classic point ‘n’ click adventures on iPhone. No Monkey Island or Broken Sword? Well, you can now check out Beneath a Steel Sky for free. It’s a comic adventure set in a world not unlike Philip K Dick’s dystopian future of Blade Runner.

The free version lets you check out the first chapter of the game, probably equating to the old 3.5-inch floppy disk demo you may have played back in 1994. Unlike the floppy edition, the iPhone version features full voice acting and all-new cut scenes.

Caution - if you experienced Beneath a Steel Sky all those years ago, this game may evoke dangerously powerful nostalgic feelings. You’ve been warned. 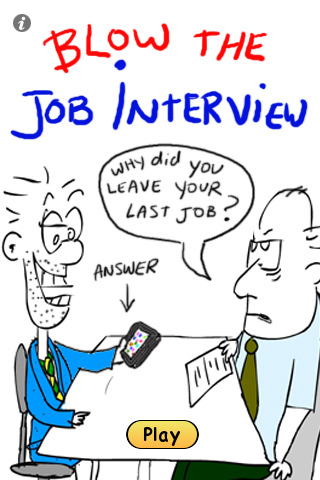 Soundboard apps are almost universally pointless, and quite often offensive. Blow the Job Interview is both, but it's also hilarious - make no mistake, though: this is a crap app.

It consists of six different lines of spoken words and phrases, which join together to form a reason why you were kicked out of your last job. You can make your own concoctions, but sometimes the funniest nonsense comes out when you hit the 'random' button.

One of our favourites: “The CEO fired me when I made diarrhoea at the company picnic.”

Yes, it’s horribly juvenile, and if it ever comes out with anything even close to any of your real-life experiences you should be thoroughly ashamed of yourself. Still, this crap app raised a smile.

The Pocket Gamer Awards 2010: The Finalists