Now that Gangster City has started pointing a Desert Eagle in my general direction, forcing me to dedicate time to it, you can understand why I was slightly reluctant to go back to Mafia Wars.

However, with the new Bangkok expansion out today, and the added enticement of being able to test the expansion prior to its release, I threw on my silk shirt and headed back into Zynga's gangster world.

Aside from more mafia dealings, I also opted to look at something more creative in the form of MyTown, developed by Broken Bulb, before delving back into the destructive world of Wild Ones. 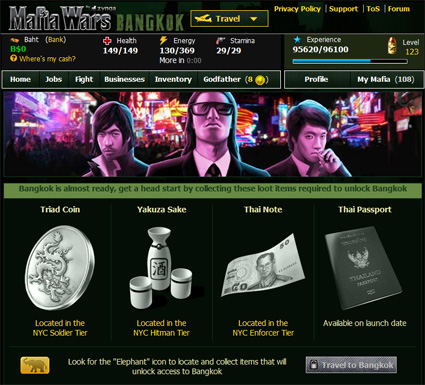 It's finally here: the anticipated new city Bangkok can be beta tested by the public.

First up are the themed items. Bangkok involves a Triad vs Yakuza feud, so the attire consists of knives and silk shirts. Then there are new businesses to run, bosses to kill, and many new jobs to complete.

According to Zynga, Bangkok is the first major city to offer something to both newer players and veterans who want a new challenge.

I assume this relates to the new Diamond level tier above Bronze, Silver and Gold, and the 'super powerful' (Zynga's words not mine) weapons you can unlock as well as what Zynga has called 'Dynamic Content Tuning' - difficulty that tailors to your level, basically.

Unlike other cities, you can choose to side with either the Yakuza or Triads in certain missions. Whichever side you choose will affect the other, so be careful. As far as I know, you can get differing businesses from each side but apparently it's possible to get both with some careful, 'agnostic' play.

According to Zynga, over 150 million jobs are done every day, so it must be doing something right. Beta testing started today so login, make sure you are level 18 and enjoy. 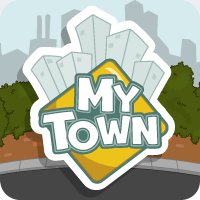 If you enjoy playing games like Sims 3000, My Town offers a more social experience in a similar vein. The objective is to build a thriving town, including the building of houses, roads, amenities, businesses, and most other buildings you can think of.

Doing so rewards you with experience to unlock more productive versions of each that generate yet more experience and coins, and so the cycle continues.

In the process you will hopefully build up a town that you and possibly your peers can be proud of, and the chance to enjoy a severely diminished social life.

My Town boasts an impressive array of buildings to choose from and level your way up to including hospitals and universities. Creating your own unique town is easily doable.

It also looks good, too. The user interface and graphics are simple but effective at conveying some life in your town without making it hard to find what you are looking for in and amongst many buildings.

As ever, this is another Facebook simulation that has a second currency that's used for certain facets of the game, like the expansion of your land. It's not totally necessary, but it sure does help if you invest some money into the proceedings.

Of course, if you are as tight with money as I am, it's unlikely you will - either way, though, you can still enjoy My Town.

A few features are works in progress, but the game is in the beta phase. Everything is labelled as beta on Facebook, of course, but at least it means the game will improve and those missing features will appear in time. Because of the way games like this work when it comes to revenue, extra content is guaranteed.

I probably sound like a stuck record, but My Town isn't anything new. It's a slightly modified take on a very successful, proven social game formula, and if you harbour a particular dislike for farming or running a gang then it's a great alternative. In some ways it may be more educational, too.

Summarising Wild Ones is pretty easy. It's Worms on Facebook, much like Crazy Planets, another game we gave the roundup treatment recently. For that reason, it's quite good.

Granted, Worms will always be best when it's actually Worms you're playing, but if something borrows the positives and doesn't mess the rest of the game up, in theory things should all be well.

Not heard of any of the Worms series? Well the idea is to survive against other worms all armed like yourself with bazookas, grenades, and other ingeniously destructive weapons in a turn-based deathmatch.

Because each turn is timed, you have to make quick decisions on your plan of action - and be warned: they're far from quick, agile creatures, so each second counts.

In terms of gameplay, Wild Ones is fun to play and not too dissimilar from the aforementioned Crazy Planets. Unlike Crazy Planets, however, Wild Ones allows you to battle up to four other players to the death, which is immensely amusing, and should satisfy any competitive streak.

And there's nothing quite like it when you manage to perfectly launch a grenade all the way across the map to someone who thought they were safe, and then gloating about it in chat like the mature adult you are.

The puppy, complete with a mean grimace, is the first pet you start out with. At level 3 another becomes available, and so on, so that levelling-up feels rewarding. It also allows more powerful weapons to be bought, and cash to made for making your pooch look the bees knees - two more good reasons to invest your time into the game.

Subscribe to Pocket Gamer on
I mentioned a while back how Facebook needed a true multiplayer experience, and for me this is how I envisioned it. Lobbying up with people is quick, and the game seems to match you with similar level enemies, which helps to keep things fair. Turns are quick, so you don't have to wait long for your go to come around again. All in all, Wild Ones is definitely one of the finer multiplayer offerings on Facebook, and even though it lives in the shadow of Team17's classic, and it doesn't allow you to build a town, plant seeds or run a business - it goes back to a golden time when games weren't a chore you felt you had to play. Farmville

I wont go into changes this week, so instead enjoy the Farmville parody that's been doing the rounds. 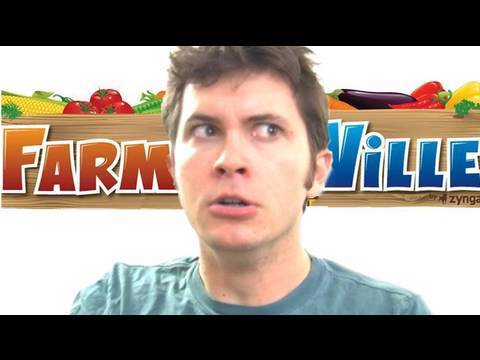 Subscribe to Pocket Gamer on
In other News
Data Club

Courtesy of the statistics people at App Data, here's another look at stats for Facebook gaming, taken today. Below is the number of daily active users (DAU).

Want to know the total number of users across all games each developer has? Here you go.

Robot Wars meets Match of the Day in SocCars