This is the tenth anniversary of the roundup, a feature that only last year was a twinkle in our editor's eye (at least that's what I thought I saw).

Over that time we have covered what we deemed to be of interest for you, our highly esteemed readers, in the ever-growing world of social gaming and will continue to do so over the coming months.

With every developer and their dog getting involved in the scene, it makes even more sense for coverage of this exciting area of gaming, and while the feature may evolve, its heart and soul will always remain the same: To let you know what's going on, and what's worth or not worth playing.

Here's to the next ten episodes.

Obviously dealing with social games news means I get to play a lot of them which should be a good thing, but to be honest things a lot of new games were getting a bit too similar; most titles refusing to stand out.

Games like Mafia Wars are enjoyable, don't get me wrong, but they lack 'oomph' for lack of a better word and if you have played one, it often feels like you have played them all.

Gangster City doesn't change the ingredients found in other Mafia games such as adding friends to have in your Family, or buying weapons and vehicles to improve your attributes, but it does add in a few ingredients of its own that makes the end dish all the more palatable, and unique.

Before you get to shoot anyone there's a cut-scene detailing the game's backstory. In short, your father has been shot and instead of forgiving them and trying to move on, your character decides that revenge is sweet, and retribution the only answer. 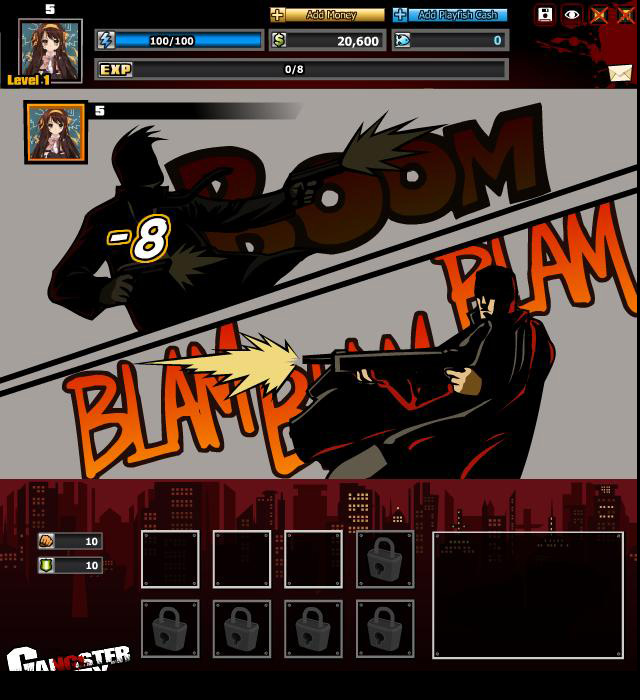 It's all done in a style that is reminiscent of the artwork from later Grand Theft Auto titles mixed with a comic book, which means the visuals are easy on the eyes. The accompanying voiceover of the main character (yourself) also goes down nicely.

OK so the voice acting is slightly cheesy but the comic book feel of Gangster City means it doesn't sound out of place, and how many other Facebook games can boast that sort of exuberant entrance?

Once up to speed on the family's misfortune, you get to take your first missions. Like in Mafia Wars you simply choose a mission, and the game does the fighting. The VS battle screen looks good, and numbers appear as you do damage but that's it.

It is more interesting to watch than a fight in Mafia Wars but not a lot. There are, however, a variety of other clips to view as well when undertaking missions that don't involve the use of guns, including the hot-wiring of a car. 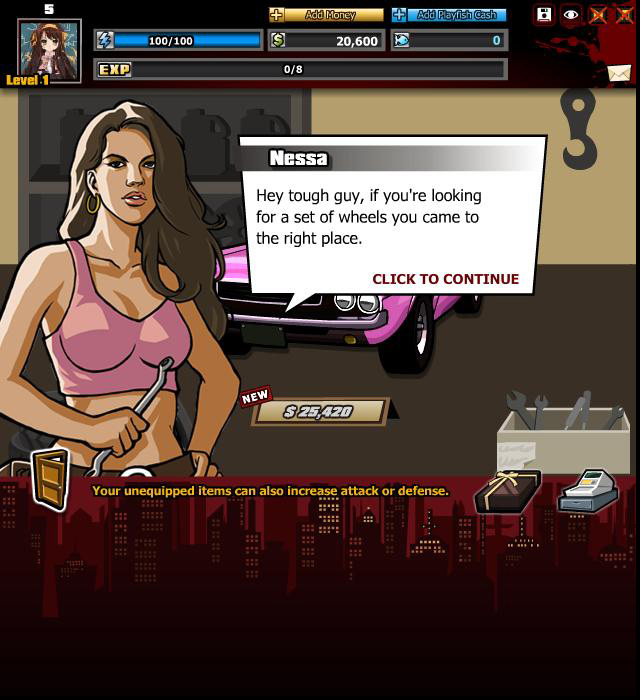 Completing missions takes away energy so you can only run so many missions a day. Each mission you complete provides you with money, experience and possibly a bonus which allows you to purchase and equip weapons, armour, vehicles and more.

Yes, you actually equip these things, so choose wisely until you unlock more slots.

Playfish cash can be bought and used for special items, which seem to be better performance-wise, but you can happily get by without. Still, if you like to make your mafia man a bit more pimp the option is there.

There are properties you can purchase too. Found on the map screen, these will give you a cash boost eight hours or so, and investing in them can raise the cash boost you receive. Again, nothing new here but Gangster City does make the properties feel a bit more important to you than in other games of this type.

It wouldn't be a social game without some use for friends, and Ganster City knows this. You can add friends to your family for bonuses, and they can even be assigned jobs to do for money or guard your properties. 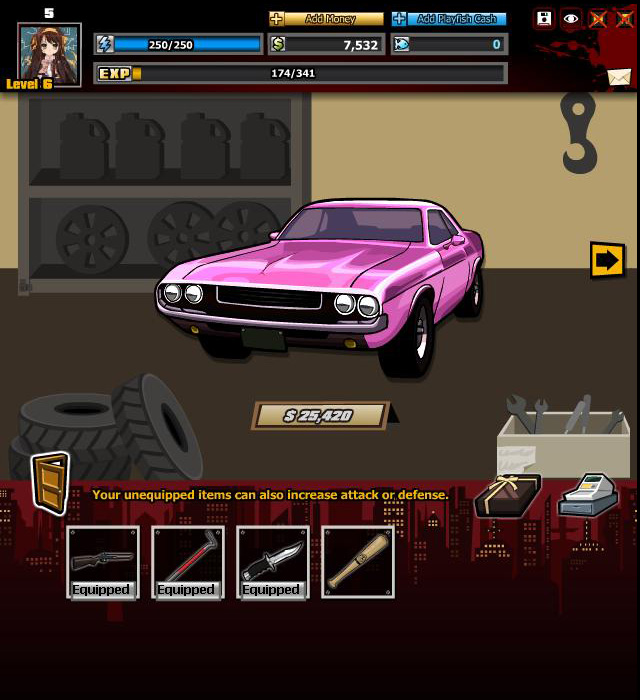 These are just some of the reasons why Gangster City feels more involving, and dare I say it, realistic.

What I mean by that is it's nice being able to choose what weapons and cars to use because even Tony Montana would struggle to carry 700 odd weapons and drive a dozen vehicles to a shootout.

Another unique feature is how the game deals with player versus player fighting. Instead of a big list, you pay for the privilege and the lists come in three forms; free list, weak list and rich list - each self explanatory.

Competing against other players allows you to rob money, so it's a great way to build up funds for that Strangler jeep you want.

Gangster City is really enjoyable, the level of effort clearly visible in the presentation of the game. It also has the substance to back it up. Longevity? Not sure, it's early days for my character, but if my early impressions are kept as positive as they are, we may just have a Mafia Wars killer on our hands.

Arcade games are great for short bursts of gaming, and while many are old and have the sort of graphics that can cause permanent retina damage, many are as addictive and enthralling as they were all those years ago.

Namco Bandai have decided that Facebook needs an App Store equivalent for mobile games like Pac-Man, and so it's became a reality, the difference being you can try out the games before you buy. Alongside the constantly eating hero are 17 other arcade games including Namco Arcade Golf, Inspector Gadget, Zoo Keeper and Galaxian.

The hope is that the store will help other mobile developers get their games noticed, and of course generate revenue.

If you are familiar with any of those or other games from Namco, then it should be a trip down memory lane - assuming you don't already own them.

For those who have never heard or played any of these games, you young whipper-snappers should probably head on over to try them out.

As if there weren't already enough simulation games on Facebook, another one has surfaced. Wait, come back. This one is slightly different; it's based on a garden.

OK so it isn't that far from that farm game by Zynga, but the emphasis is enough to make it a fresh challenge, and one that won't muddy your trousers or require weeding or any physical exertion whatsoever.

Developed by the appropriately named Tall Tree Games, the idea is to build a wondrous garden. To get there will include a lot of planting, watering and weeding. No one said it would be easy.

The stand-out feature of Garden World is that whilst many seeds can be brought from the store, some can only be obtained from cross-pollinating two plants. This adds a whole new depth to the game, and the simulation genre. It's definitely the best bit.

Graphically the game is green. Very green in fact - which you would expect. The flowers and grass look suitably appealing, and the user interface is laid out in a way that's easy to navigate. The only fault when it comes to looks is that it's going to be awfully familiar to anyone who has played this sort of game before.

If gardening excites you, then Garden World may just be the ticket, and even if you aren't the green fingers type, you may gain some satisfaction from the experience.

Just don't expect anything as fresh as a daisy; the staple of levelling up, making money and selling goods is what you will be doing most to the point where you wonder what the fun ever was.

Still it worked for FarmVille, why can't it work here?

* More changes in Desktop Defender. Shortly after our feature went live the game underwent a major graphical overhaul, and other gameplay mechanics were changed - further improving the Facebook tower defense game.
* It seems many fans of Playfish were averse to the slightly more 'mature' material in Gangster City as displayed on their Facebook page. "This is sad... i thought playfish was family oriented they just ruined it with this game," one fan wrote.
* MyTown, the iPhone social location app has just received an update, taking it to 2.0 and adding lots of new content in the process. It's been dubbed as a real world monopoly, and just passed half a million users. US only though, I'm afraid.

As usual, here are the numbers of daily active users (DAU) from Facebook gaming taken today, courtesy of App Data:

In addition, here is the Facebook game developer leaderboard showing the total number of users:

So that's it for the 10th feature, we hope you enjoyed it. As always don't hesitate to get in touch with me regarding social games. Next week we shall be taking a sneak peak a the long awaited Mafia Wars Bangkok expansion.

Taiko Drum Master for iPhone to be available only in Japan