Is that what they mean by microwave transmitter?

There's been good and bad stuff revealed at the Consumer Electronics show this year, but I'll let you decide which category Touch Revolution's Android-powered microwave fits into.

Quite why, it's hard to tell. Maybe the two could be combined, requiring you to play Pac-Man and eat as many dots as possible to get the power up on the cooking settings, or beat a game of Diner Dash before the timer on your Cup-a-soup finishes.

To be fair to the designer, Touch Revolution probably isn't looking to put this cooker on the shelves and try to sell it by offering you the opportunity to check your email while you defrost a teacake.

The company's remit is in enabling all manner of devices with touchscreens and intelligent operating systems – the operating system-equipped microwave and washing machine on show were more of a statement on how technology can be integrated into all forms of modern life.

Certainly I wouldn't want to hold a microwave up to my ear to make a phone call, though. The metal plate in my head would probably pull the fillings out of my teeth and shoot them through my eyeballs. 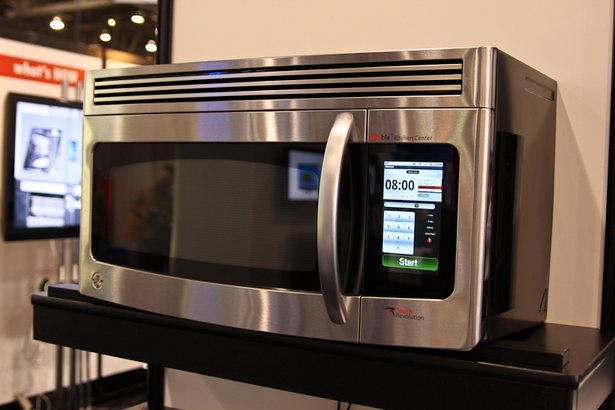