Highlights of the DS's toughest year yet

2009 was a difficult, transitional year for Nintendo’s squillion-selling handheld. Having conquered the world by helping expand gaming’s reach to embrace the old and previously uninterested, the question was: where next for the DS?

It wasn’t just a question of strategy, either. Never the most technically advanced bit of kit, four years after launch the DS was almost audibly creaking.

Worse yet was the emergence of a funkier, sexier handheld. No, not the PSPgo (it’s not nice to mock, you know) - we’re talking about Apple’s iPhone.

For one terrible moment, with Apple’s flashy young upstart leeching away attention as the new king of portable cool, Nintendo appeared to stall. And in this game, momentum is everything.

Nintendo’s answer was, we have to say, far from convincing. The DSi appeared to be a hastily cobbled together (though fairly stylish) attempt to grab a piece of the download/App Store pie. The flow of DSiWare games was more of a trickle, and the quality wasn’t especially high.

Still, on the DS software front 2009 was a stronger year for the DS than many people gave Ninty credit for. Take a look at these beauties.

Nintendo doesn’t have the monopoly on creating rich action RPGs for its handheld, as Square Enix showed with this fine addition to the popular Kingdom Hearts franchise.

As with previous releases, Kingdom Hearts: 358/2 melds Square Enix’s distinctive Japanese RPG style with Disney’s world-famous cartoon characters. It continues to surprise with just how well the combination works, even in such capable hands.

While the story of 358/2 isn’t particularly memorable, the core action most certainly is thanks to a brilliantly executed real-time battle system and an absorbing level of customisation. All in all, it proved to be one of the finest DS adventures of the year.

Henry Hatsworth in the Puzzling Adventure
Publisher: EA
Developer: EA Tiburon EA’s quirky adventure is born from a very good question - if the DS has two screens, why don’t more games use them both? And we’re not talking about using one as a map screen, either. Henry Hatsworth is almost unique in that it uses each screen simultaneously - the top to render a charming action platformer, and the bottom to display a match-three puzzler. It sounds like it should be a confusing mess, but somehow it works beautifully.

The tightly wound cause-and-effect relationship between the two elements ensures that Henry Hatsworth is one of the freshest DS titles to come out of 2009.

Art Style: CODE
Publisher: Nintendo
Developer: Skip As the lone DSi representative on this list, Art Style: CODE really shows the way to go for fellow DSiWare developers in 2010. Namely: be original and be good. 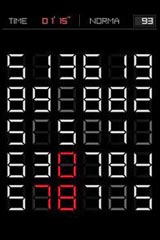 The idea is to swap numbers in a grid to make lines that add up to ten. The twist comes in that numbers can be flipped to become something else - so a 6, when flipped, becomes a 9.

It’s an ingenious take on existing templates that, when mixed with some stylishly retro presentation and pulsating music, makes Art Style: CODE the most refreshing DS puzzler of the year.

Even as we roll inexorably towards the second decade of the 21st century, it’s heartwarming to see the names of Sega and Treasure associated with one of the finest DS games of the year. The names of both companies have become synonymous with simple yet ingeniously designed 2D games.

This is no mere nostalgia trip, though - Bleach: Dark Souls boasts online multiplayer, an in-depth Story mode, and dozens of characters lifted directly from a popular Japanese anime. If you wanted to indulge in some quality scrapping on your DS in 2009, this was the place to come.

Disgaea DS
Publisher: Square Enix
Developer: Nippon Ichi In a year when Nintendo drew derision from its fans for aiming for the lighter end of the market, Nippon Ichi’s Disgaea was like manna from heaven for hardcore gamers. Wilfully odd, wickedly funny, and vertigo-inducingly deep, here was a game to sit and chew over for upwards of 100 hours.

It’s a turn based strategy RPG at heart, in the same vein as publisher Square Enix’s own Final Fantasy Tactics titles. In fact, it’s a pretty straight conversion from the 2003 PS2 game (which also saw a PSP release), so the fact that it looks and plays so faithfully is a true testament to the developers.

If you wanted more from your DS in 2009, something to lose yourself in over a rainy holiday, nothing offered as much meat for your money as Disgaea.

As with the previous title, this was no mere re-release of an entry to the much loved JRPG series - we’d never seen Hand of the Heavenly Bride (officially) released in the west until this point. The game also came with its customary 3D overhaul, bringing it in line with modern standards.

Hand of the Heavenly Bride really drove home what we’d been missing all these years, boasting a ripping yarn and bags of charm built on rock-solid RPG foundations.

Which makes it arguably the finest shooter on the DS. It’s another hypnotically beautiful update of the classic Space Invaders gameplay, with power-ups, combo systems, and huge bosses galore.

In fact, the only criticism that can be levelled at it is that it didn’t manage to knock us off our feet with its unexpected brilliance. But that’s mainly because we knew it would be absolutely ace.

The Legend of Zelda: Spirit Tracks
Publisher: Nintendo
Developer: Nintendo We didn’t have to wait all that long for a follow-up to Link’s 2007 DS debut, Phantom Hourglass. Two years might sound like a long time, but in the painstaking world of Nintendo it’s nothing.

Here Link swaps his boat for a chugging train, and is accompanied by Princess Zelda for the first time. It’s such quietly brilliant innovations that keep the Zelda formula as fresh and as compelling as ever.

Spirit Tracks is a worthy sequel to the best DS game of 2007, which naturally makes it one of the finest of 2009.

This time the famous brothers must work with Bowser to overcome series antagonist Fawful, with much of the action taking place inside the great dragon as our heroes shrink down and take the plunge. At other times you get the chance to take control of Mario’s arch-nemesis himself, in all his boorish, destructive glory.

As ever, the script is brilliantly well written, eschewing the usual epic guff associated with lesser RPGs in favour of fun and laughs. The battle system, too, places the emphasis on your own reactions over stats and hit points.

Mario & Luigi: Bowser’s Inside Story is that rarest of things – an RPG that can be appreciated by those who normally hate RPGs. Truly one of the finest DS games of this or any other year.

GTA: Chinatown Wars
Publisher: Rockstar
Developer: Rockstar Leeds As with certain other PG end of 2009 lists, deciding which DS game was the best of the year was far easier than compiling the top 10. You see, for all the brilliance on display elsewhere on this list, only one game scored a perfect 10 out of 10.

GTA: Chinatown Wars remains unlike anything we’ve seen on the platform to date. It places you in a living, breathing city filled with activities (some legal, most not) to dive into, whether it’s running missions for local triads, making home-made Molotov cocktails or amassing a fortune wheeling and dealing in - ahem - illicit goods.

There’s a sense of scale, a range of playing styles and a level of production values on display here that exceeds many of the year’s triple-A console titles. It’s such an immense title that for the PSP version - running on far more capable hardware - all Rockstar did was sharpen up the graphics and throw a couple of bonus missions in.

When the DS’s successor arrives and we look back on the absolute best that the system had to offer, it’s a sure bet that GTA: Chinatown Wars will be there or thereabouts.