We had it from a pretty solid source that PSP Minis were coming to PS3, but didn't want to jump the gun too early. Especially while Sony was rolling out the classic party line of not commenting on rumour and speculation.

But a post on the European PlayStation Blog points toward a pre-Christmas 3.15 update to PlayStation 3, which will allow support for PSP Minis.

"This firmware update allows the minis emulator to work on PS3 and we are working on getting the majority of the current minis ready for the PS3 from the 17th December," reads the blog.

Buying a Minis game for either the PSP or PS3 will allow you to play the game on both devices, should you be flush enough to own a full complement of Sony consoles.

There is one small caveat that might make it worth waiting for any immediate Minis purchases, though: "If you buy a minis game from the 17th it will work on both platforms..." suggesting that if you buy one on your PSP on December 16th, it might not necessarily be available in your living room.

Hopefully, details on how the whole system works will be clarified by Sony over the next couple of days, but it's good to hear Hero of Sparta, Pinball Fantasies and Zombie Tycoon will soon be running on the big screen, too.

Let's hope it ushers in a new era of cross-platform compatibility between the PSP and PS3, eh? 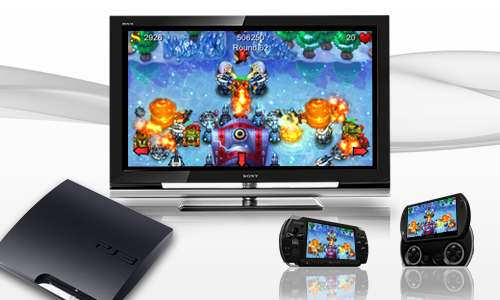 Want more? Check out our 20 other PSP Minis news stories!

iPhone game Voltron claws its way onto the US App Store

Opinion: There's only one way Sony can resurrect PSP and PSP Minis