Motorola hasn’t had the easiest ride of late. While the classic design of the RAZR helped the company score some impressive sales a few years ago, successive handsets have failed to make the same impression and Motorola’s market share has diminished considerably.

However, the manufacturer is now staging something of a fight back, throwing its weight behind Google’s Android operating system. US mobile users have recently gained access to the Motorola Droid - the first phone to ship with Android 2.0 - while here in the UK the DEXT (known as the CLIQ in North America) is now available, sold exclusively via network operator Orange.

The DEXT represents Motorola’s first attempt at creating an Android-based smartphone and comes pre-loaded with the company’s unique MotoBlur interface.

This proprietary operating system sits atop Android’s own code and allows users to integrate several different services under one account. All of the popular social networking bases are covered, including Facebook, Twitter and MySpace. Other popular sites - such as image-hosting behemoth PhotoBucket - are also supported.

Once you’ve linked your accounts the magic really starts. The Home screen of your DEXT becomes a hive of activity: various widgets show events from your myriad social networking accounts (known as 'Happenings' in MotoBlur parlance) as well as your current status on Twitter and other sites.

Compared to the relatively static Home screen boasted by the iPhone it really does feel like a step forward: the information is automatically updated so you’re presented with a constantly evolving snapshot of your online life. 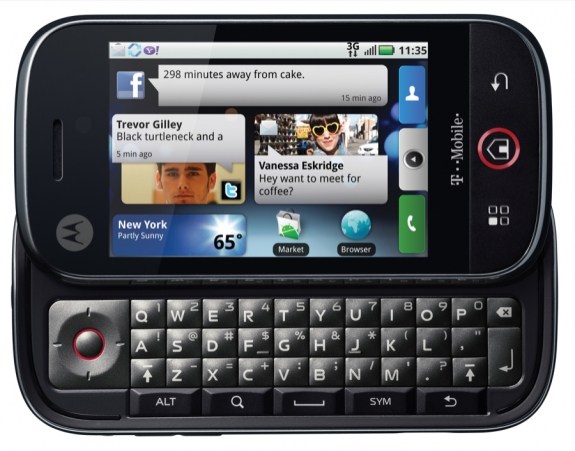 Another advancement brought on by MotoBlur is five separate Home screen pages - an increase on the typical Android arrangement of three. The additional real estate is welcome, especially when you consider that at least of one of those screens is going to be packed with the aforementioned MotoBlur-exclusive widgets.

After all of these innovations, it’s mildly disappointing that the DEXT is packing Android 1.5 and not a more recent iteration of Google’s mobile OS. While it’s still perfectly usable, it’s nevertheless a far cry from the 2.0 version on the Droid and is a step down from 1.6 - which is what most other Android handsets are running right now.

Putting software concerns to one side for a moment, the design of the DEXT is something of a halfway house between the plain T-Mobile G1 and the gorgeous Droid.

Tipping the scales at 163 grams, the DEXT is a heavy phone and isn’t particularly slender, either. Still, the rounded edges ensure that it sits comfortably in the palm and the slide-out QWERTY keyboard is both firm and pleasing to the eye - certainly more so than the awkward mechanism sported by the G1.

Nestled alongside the keyboard is a dedicated D-pad, which makes the DEXT an absolute boon for pocket gamers. We tested the excellent Mega Drive emulator Gensoid and controlling the action was a breeze. 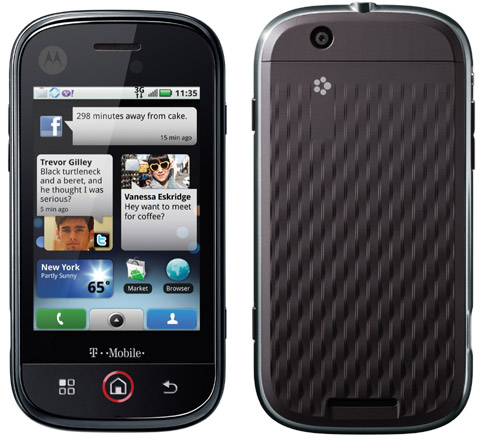 The buttons on the keyboard are a little too close together for comfort - it’s too easy to press two of them by mistake - but on the whole the physical keyboard is a resounding success, and if gamers had their say all phones would come with a similar D-pad as standard.

Elsewhere, Motorola has attempted to raise the bar a little: there’s a 5 megapixel camera that produces fair-to-middling results but is definitely an improvement over the one found on the G1. There’s also a 3.5mm headphone jack - something that dedicated audiophiles will no doubt be pleased about.

Ultimately, the DEXT is a bold opening salvo in the Android war and as we already know has set the scene neatly for the launch of the arguably superior Droid. However, with that handset not likely to hit UK shelves until next year, the DEXT is unquestionably the best option for anyone wishing to dip a toe into Android waters this side of Christmas.

Combining a solid design, excellent gaming potential and the ingenious MotoBlur interface, the DEXT is Motorola entering the Android sector with style – it’s just a shame that it doesn’t feature Android 2.0, like its stablemate The Droid
By Damien McFerran
| Nov 23, 2009 |
Mobile
Find out more about Motorola DEXT

Motorola DEXT to get Android 2.1 update