iPhone killer alert: Could Nokia's N900 be the next big thing in mobile gaming?

Will it provide gamers with many happy Maemo-ries?

This morning, Nokia unveiled its latest mobile phone. Well, mobile device, really: the N900 is less about calling and more about everything else.

3.5-inch WVGA touchscreen, 32GB of storage, a slide-out QWERTY keyboard, HSDPA and wi-fi connectivity, a web browser based on Mozilla that supports Flash, a five-megapixel camera, A-GPS plus mapping services, and Nokia's slinky Linux-based Maemo software holding it all together. Nice.

However, the official N900 website is already promoting it with the slogan 'RAW COMPUTER POWER', thanks to its hefty 600MHz ARM processor, up to 1GB of application memory, and OpenGL ES 2.0 graphics acceleration.

This is where Pocket Gamer readers should be getting interested. The N900 sounds like it's going to be potentially a beast of a gaming device.

OpenGL ES 2.0 is the reason many games developers have been flipping over iPhone's specs, after all. Nokia was regularly questioned at conferences about when it was going to support the standard in its N-Gage handsets - alas, something that seems destined not to happen now. 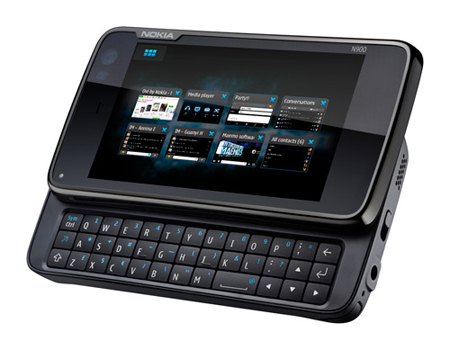 Maemo seemingly has the chops for high-end gaming, then. The question is whether Nokia sees games as a big part of it.

The official technical specs imply not: in the list of 20 applications, 'Games' is listed 18th, below 'Clock', 'Calculator' and - the shame! - 'File Manager'. It may not be billed in order of importance, but games aren't promoted on the Features section of the site, either.

It's safe to assume that the N900 will have access to Nokia's Ovi Store, though, in which case developers will be able to make games available for it. If Nokia does see the gaming potential of the device, it could be courting the top iPhone developers now, looking to sign up a jazzed-up port or two.

It would be a shame if, seeing the device's other features being promoted more heavily than games, developers and publishers shrug their shoulders, and just add the N900 to their list of handsets to port their existing Java games to.

Anyway, it's probably unfair to criticise Nokia for not making games a high priority for its new handset, which after all is part of the range of devices that's traditionally been known as internet tablets.

Still, the N900 could be the most powerful gaming handset ever released by Nokia. We just hope some developers will be taking advantage before it comes out in October.