It's great that a lot of the most popular games on the iPhone are ones we haven't seen elsewhere, but it's equally great to see games from another platform getting a facelift on the platform.

Perhaps the most obvious choices for conversions are traditional Java mobile phone games, what with the similar price point and comparable demographics. This week, we seem to have split the seams, with games that have already been on the DS, PC and mobile phone alongside those made just for the App Store.

We often find that real retro conversions have a bit of trouble on iPhone, but we've even got a great freebie that hails from more than 15 years ago. That's the Trawler Report for you - promoting diversity wherever it goes. Enjoy.

SnakeGalaxy Lite
By DigDog
What is it? It's Snake gone 3D and stylish
Type Demo

Snake will have been the first mobile gaming experience for many a gamer. The classic Nokia version of the game was dangerously addictive in spite of the fact that it seemed dated even in its day.

SnakeGalaxy takes the same basic gameplay - you control a snake that gets larger as it eats things- but gives the blueprint a stylistic overhaul. Levels take place on a sphere instead of a flat 2D plane, too.

This demo gives you just the tutorial level to play through, but it's enough to give you a taste for Snake Galaxy's controls and style.

Cooking Mama Lite
By Namco
What is it? It's a casual food preparation game
Type Demo 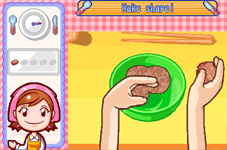 We had mixed feelings about Cooking Mama when we reviewed the full version, but Namco has released a freebie version so now you can take a bite yourself before buying it. It's a game where you get to make recipes by completing a series of mini-games.

There's just a single recipe to make in this Lite version, making it just about as stingy as the paid-for version, but if you've been contemplating buying Cooking Mama we recommend you give this version a go before taking the plunge. The recipe features a good few stages, making it a good representation of what goes on in the full version.

Pyramid Bloxx Lite
By Digital Chocolate
What is it? It's slave labour made fun
Type Demo 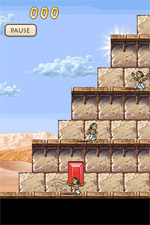 Digital Chocolate are responsible for some of the mobile phone's most imaginitive games, with titles like Rollercoaster Rush and Tower Bloxx high on our list of all-time faves. Pyramid Bloxx is one of their more recent mobile efforts, and now you can play it on yor iPhone.

You have to pass stone blocks up between your Egyptian labourers in order to make pyramids. Get each pass dead on target and you get a bonus. Like most of Digital Chocolate's Lite versions, there's a decent amount of gamplay on offer here. In fact, the full version is yet to make it onto the App Store at the time of writing.

Papi Missile
By Sunflat
What is it? It's missile command, Papi style
Type Full 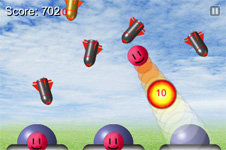 Papi is one of the iPhone's top budget stars. Just search for him on the App Store, and you'll be met with a sea of pink little Papi game icons.

His latest venture is a missile command style game where you have to try and keep your Papi missile silos from getting destroyed by falling missiles. Dragging a line from one of the Papi faces upwards will fire a missile from one of your own silos.

It's simple, but fun for briefer gaming sessions. The best part is that it's free, of course. The second best bit is that you can upload your scores to the web to see how you fare alongside the world's most obsessive of Papi fans.

Perfect Balance: Harmony Lite
By ttursas
What is it? It's a physics-based balancing game
Type Demo 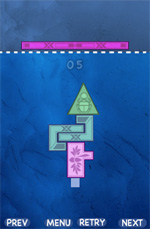 Real world physics can be one of the most engrossing things in a game. On the iPhone, they tend to get your fingers moving as quickly as your brain as you try and work out how things are going to move before they do.

Perfect Balance's gameplay relies heavily on this idea. In each level, there are a few platforms and a handful of objects you have to rest against them, without letting any of the objects fall down the screen. The physics aren't the most advanced we've seen but the tight structure within the levels keeps you hooked.

Pick of the Week Wolfenstein Lite
By ID Software
What is it? It's the classic 90s shooter
Type Demo 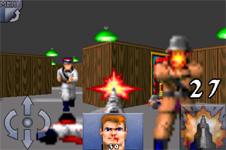 Whippersnappers may think of Half-Life, Doom and Quake as grandads of the first-person shooter genre, but their retro cred pales in comparison to that of Wolfenstein.

Originally released in 1992, there's many a copy of the game nestled in cupboards across the country, most likely laden with dust just begging to be blown off.

This port of the game is up to the task of re-visiting the memories of gaming back in the old days without trampling all over them. There are three levels to play through in this Lite version. Three levels of walls full of Nazi stormtroopers and walls adorned with pictures of Adolf. They don't make 'em like they used to.

Crap Apps Box of Shame Urinal Test
By Intuapps
What is it? It's a game to test whether you know which urinal to choose
Type Full 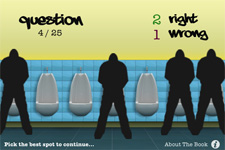 There are many unwritten codes of behaviour when it comes to being a bloke. Or at least it always seems like they're unwritten. In fact, they apparently have been written down in a book called The Man's Book by Thomas Fink. The Urinal Test is a game designed to promote this book.

All you have to do is choose which urinal you should use in each scene, as dictated by the laws of manhood. Hmm, it feels like that should be written in capitals.

But really, come on. Do we really want to spend our leisure time being taught how to use the toilet? All it's missing from the experience of a disastrous night out on the town is the bloke in the corner, desperate to give you paper towels and Chupa Chups, and the odd, slightly wild-eyed stranger coming out of a nearby cubicle, vigorously rubbing their nostrils.

Sponsored feature: Why use a mobile headset?